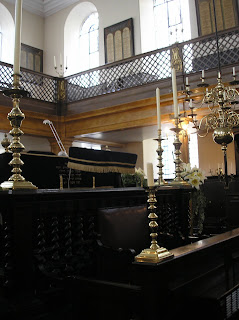 Other than Heyer’s casual, racist (but probably historically accurate) references to moneylenders and Nita Abram‘s brilliant Courier Series about an Anglo-Jewish family during the Napoleonic wars, I didn’t know much about the Jewish population of Regency London. I still don’t. But I’ll share what I have.

First, a great overview of Jewish history in England from the terrific georgianlondon.com which mentions the significance of the Bevis Marks synagogue, in continual use for almost three centuries. Also on the same site, there’s a map (Horwood’s map of London, 1792) showing the areas of settlement for various ethnic groups.

By 1800 there were about 20,000 – 25,000 Jewish inhabitants of England, predominantly from Holland and Germany, three-fifths of whom lived in London. They were widely differentiated in wealth and social strata and formed different communities which expressed themselves strongly in terms of education, charity, and religious practice. However, the decade of the 1790s had seen a great increase in paranoia and fear of foreigners, including the Jewish community. Yet Jews proclaimed their patriotism, and enlisted in the army and navy.

It is said that on one occasion, when a general review of the newly-enrolled force was held in Hyde Park, George III was very much struck at the number of animal names (Bear, Wolf, Lion, and so on) in one of the East End regiments, largely Jewish in composition. At the time of their enrolment, however, there had been a certain difficulty. On October 19th, a solemn fast had been observed, large numbers of volunteers paraded the City, and ten regiments went to Church for Divine service. The corps who had not already taken the oath did so now, and three hundred Jews, of good family, were among their number. A contemporary news-sheet gives an account of their difficulty:

By an order from their High Priest they were prohibited from attending in our churches during the time of Divine Service. The High Priest, however, expressed his highest concurrence to their taking the oaths of fidelity and allegiance to our king and country. These gentlemen accordingly took the oaths, either upon the drilling-grounds of their respective corps, or in the vestry-room of the churches, as circumstances required. They were sworn upon the Book of Leviticus instead of the New Testament.

The call for service continued: and on August 15th, 1803, Rabbi Hirschell–not long since arrived in England–preached in the Great Synagogue [Bevis Marks] on the duty of taking up arms in defence of the country, though insisting at the same time that the ritual precepts of Judaism (such as the observance of the Sabbath) should not be neglected save in emergency. More.

A Royal visit was made to the Synagogue in 1809 by the Dukes of Cumberland, Sussex, and Cambridge, a very big deal indeed (and a grand opportunity for cartoonists):

Yesterday, at half past six o’clock, the Dukes of Cumberland, Sussex and Cambridge attended the Great Synagogue in Duke’s Place to witness the Hebrew form of worship. The preparation made to receive the princes evidenced the loyalty of the Jewish people, and the spectacle was magnificent and most solemn. The Synagogue was most suitably decorated on the occasion. The seats on each side were raised and the pulpit in the centre was adorned by crimson and gold. A space between the pulpit and the ark was appropriated to the Royal Dukes and the Nobility, who stood on a rich platform with four beautiful Egyptian chairs and stands for their books, flowers, etc. The Synagogue was brilliantly illuminated by chandeliers. The High Priest, Rabbi Hirschell, in his sacerdotal habit displayed unusual magnificence: he was dressed in a robe of white satin of considerable value and ordered expressly for him by Abraham Goldsmid, Esq. The Royal Dukes arrived in the carriage of Mr. Goldsmid, and their own carriages followed with several ladies of distinction. The singing was excellent and the Royal Dukes appeared much gratified by the Choruses. When the Ark was opened to take out the Five Books of Moses the Princes were conducted by Mr. Goldsmid to view the interior, at which they expressed great satisfaction, the structure being grand and beautiful. The galleries were crowded with beautiful Jewesses who attracted much the attention of the Royal Party. After the service, the Royal Dukes drove to the mansion of Mr. A. Goldsmid, where a sumptuous entertainment was provided, which was followed by a grand concert. 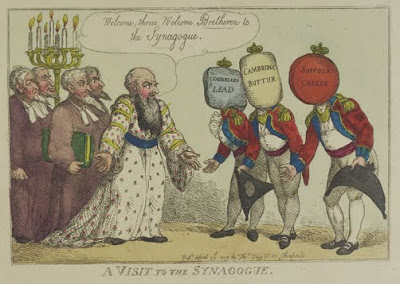 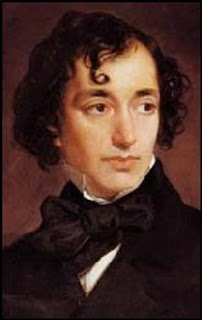 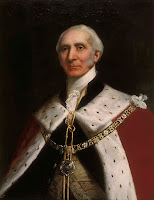 But it wasn’t until 1855 that London had its first Jewish Lord Mayor, David Salomons, and the following year Jews were declared eligible to run for Parliament. Benjamin Disraeli dandy and novelist turned politician (1804-1881), was the first Jewish prime minister of England (although he’d converted to Christianity at his father’s request. Wasn’t he a hot young thing. But I digress).

There’s a lot more to find out. Here are some interesting sources other than the ones I’ve quoted. The Jewish Museum of London has a great site and looks like a terrific place to visit. 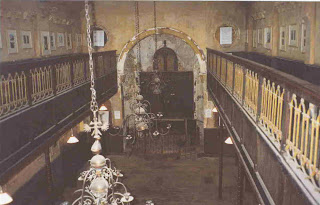 Another historic site is 19 Princelet Street in Spitalfields, originally built as a Huguenot silk weaver’s home and workplace. The Huguenots moved on, and the mid-nineteenth century wave of Jewish immigrants moved into Spitalfields, when a synagogue was added to the house. It’s untouched, but badly in need of restoration and funding. More on the East End of London and later Jewish immigration at jewisheastend.com.

I’m interested in Jewish history because of my own family history; my grandfather came to England in the great Ashkenazi Jewish wave of immigration at the end of the nineteenth century. The family archivist/genealogist is still finding out about him and his many siblings. More on that some other time. Do you have a niche of history that fascinates you, family-inspired or otherwise?

17 Responses to Jewish during the Regency