Pearls and a Spider–my new cover 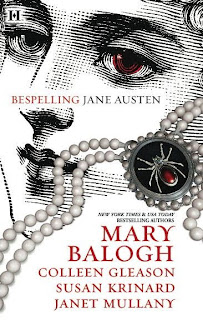 Greetings. I am having a tremendously busy time at the dayjob and I’m also on deadline, aargh. So this will be a quick post, sorry!

Here’s the cover for Bespelling Jane Austen, the anthology headlined by Mary Balogh that’s coming out in October. Isn’t it cute! And yes, there will be textual interest–embossing on the red. I’m very excited about it.

We all picked a favorite Austen novel and “bespelled” it. Mary’s Almost Persuaded is a version of Persuasion with reincarnation; Susan Krinard‘s Blood and Prejudice (I think you know what that’s based on!) is set in modern day New York (with vampires); and Colleen Gleason takes the Gardella vampire hunters out for another spin in Northanger Castle. Mine, based on Emma, is Little To Hex Her, set in the gossipy village of contemporary Washington, DC. The title is based on the opening lines of Emma:

Emma Woodhouse, handsome, clever, and rich, with a comfortable home and happy disposition, seemed to unite some of the best blessings of existence; and had lived nearly twenty-one years in the world with very little to distress or vex her.

I’m very pleased that this book is being released at the same time as Jane and the Damned (HarperCollins) about Jane Austen and the sexy, amoral, decadent vampires of Georgian England. Oh, and there’s a French invasion too. I have a killer cover for that but it’s still under wraps…

I’m managing to do some reading on my commute, when I’m not falling asleep. I’m reading The Taste of Sorrow by Jude Morgan, a novel about the Brontes, which is phenomenal. It has already caused me to miss my stop. It’s released in the US as Charlotte and Emily: A Novel of the Brontes (dumb title, but a better cover than the UK version which is the one I have. And what about Anne?).

What are YOU reading this week?

“What about Anne” reminds me of one of my absolute favorite comic strips… http://www.harkavagrant.com/index.php?id=202

omg, you’re in an anthology with Mary Balogh!!!!

I am so looking forward to this anthology and to Jane and the Damned. Right now I am splitting my reading time between Kate Hickman’s Courtesans and Lesley Hazleton’s Jezebel – The Untold Story of the Bible’s Harlot Queen. Sort of a theme there, I guess!

I love the cover, Janet. I think it will look beautiful on my bookshelf . I’m reading the Sherlock Holmes short stories. I love the mysteries even if they’re sadly lacking in romance and vampires.

Beautiful cover! I am excited about this anthology, Janet! I don’t know Susan but she’s in great company with you, Mary, and Colleen.

Courtney, that comic is PRICELESS. (Everyone, take the time to copy and paste that url!)

I’m reading The Spark, because I’m on a diet.

Oooh, pretty cover! I can’t wait to see it in person with the red embossing. (And you’re right–the UK title on the Morgan book is way better)

That cover is awesome! Can’t wait for all your releases. And wake up!

Courtney, great cartoon, thanks for the link.

Louisa, I keep almost buying Kate Hickman’s book when I go to to Daedalus and since I don’t go there very often I think I’m going to miss it.

Barbara, I was reading Soulless and then the Jude Morgan arrived and I put it aside.

Ammanda, love the idea of Wollstonecraft as a sleuth; possibly it would stop her becoming involved with inappropriate men, walking into rivers with her pockets full of stones etc.

Sarah, I adore Sherlock Holmes. Every few years I reread the lot. You’re right, tho, he doesn’t know much about girls.

This book sounds like it will be lots of fun. I’ll be looking forward to it. I haven’t yet read any of these paranormal variations on classic works and characters.