In Praise of Pencils

Still on hideous deadline and finally taking a day off from the dayjob to write, I found it difficult to pick a topic today. There’s so much going on–an historical general election in the UK, RWA’s national conference change of location to Orlando, FL and why I’m the only person supremely uninterested in the culture of The Mouse, and an announcement.

Oh, okay. The announcement first. I’m taking part in an anthology of Austen-inspired short stories edited by Laurel Ann Nattress of Austenprose with a bunch of Big Names. It will be published some time in 2011 and that’s about all I know. Exciting! 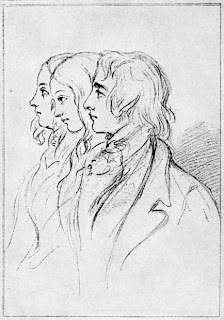 But now let’s talk about pencils. Yes, pencils. I am supremely grateful to pencils because they are about the only way I can plot, as much as I can plot anything. Pens don’t work, computers definitely don’t, but there’s something about a pencil and paper that just do it for me in terms of working things out, creating schedules or lists–it’s pencils all the way for me, baby. Maybe it has its origins in learning to read and write and draw. Does anyone else suffer from this pencil affliction?

So, pencils in the Regency. England had been a major producer of graphite since the sixteenth century, when the mineral was discovered in England in Borrowdale in the Lake District, and used first to mark sheep. The Borrowdale mine produced the purist graphite in Europe. But graphite was valuable for more than pencils: it was used to line molds to make cannon balls. Graphite was mined under great secrecy and sold under strict conditions in London. There’s a great article at The Regency Redingote, a site I only just discovered today. 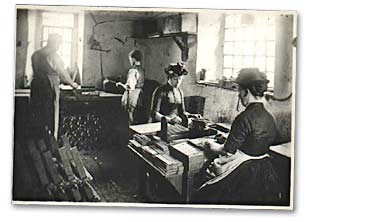 At some point in the eighteenth century, the pencil was “invented”–that is, graphite secured between two pieces of wood (cedar), and produced as a cottage industry until the first pencil factory was founded in 1832.

If you’re in Keswick in the Lake District and it’s raining (which it usually is) you can drop into the Cumberland Pencil Museum to learn more and see the biggest pencil in the world.

Does anyone else experience the pencil-creativity phenomenon?
Do you have a favorite writing instrument?

Henry David Thoreau was able to hang out for a year at Walden Pond because of the success of his family’s pencil factory.

Here is an article that discusses Thoreau’s contribution to pencil manufacturing technology.

Though I write with a pen, I always use a pencil when making notes on musical scores. Even though I rarely need to erase.

There are some things that are still faster, better, smarter when done the old-fashioned way (of course, I may be showing my age here), and plotting on a piece of paper with a pencil sounds like one of them. You can see the whole plan in front of you and make changes instantaneously. If you use PowerPoint or Visio or some other presentation software, you have to click on shapes, move the shape to where you want it, insert text, draw lines connecting the approprite shapes, and so on. It may take too long and be too slow compared to how fast the information can travel from your brain to your pencil. I’m probably showing my age here, but for tasks like this I sometimes do it on the page first and then copy onto the computer so I can edit, make copies, and share — but the brain just seems more engaged when it can create the flow as I’m thinking of it rather than focusing on how to get the text box from the upper lefthand corner to the lower right.

I like writing with a pencil and paper, but I also enjoy writing with a quill pen dipped in ink and use sealing wax on letters. So I’m pretty old school. I can’t tell you the number of times I’ve set my desk on fire because of hot sealing wax. I think I like pencils because of my librarian background and I know they erase. I only use a certain type of pencil. It must be made completely of wood. And I like the old fashioned sharpeners, but not like knife old fashioned. Obviously if I set my desk on fire I’d probably chop off a thumb with a pen knife.

My gosh, I so rarely use a pencil these days I have to tear the house apart to find one! Then to find the pencil sharpener, because whatever I find is blunt.

But I must say the drawing makes me pine for a pencil. Once upon a time I drew with pencils.

Susan, I think you hit the nail on the head with your explanation, but I still feel an erasable pen wouldn’t work. So it has to be some graphite magic.

I had no idea Thoreau had links to the pencil industry. Thanks for the link, Jenny.

Diane, the pencil portrait is of Dickens, his wife and her sister. I love its spontaneous untrained quality.

I love that line from You’ve Got Mail where Tom Hanks is going on about the wonders of NYC in the Fall (via anonymous e-mail to Meg Ryan.)He says Fall makes him want to buy school supplies and that if he knew who she was he’d give her a bouquet of freshly sharpened pencils.

The Biggest Pencil in the World! I really want to see that. 🙂

When I was in the 4th grade there was a big school trend for these pencils that were made out of clear plastic and had little sharpened points of lead inside that could be taken out and replaced by the next, sharper bit. That makes no sense I know, it’s impossible to explain, but I totally loved those pencils. I forced myself to wait until it was all gone before I used the next, sharp bit. Good times. 🙂

Jane George, I loved that line too!

Your comment is the first I have heard about RWA being moved. I have non-refundable reservations right next door to the Opryland hotel.

Anyway, interesting post on pencils. Something which most people take for granted and rarely think about.

I still prefer to make plans and lay them out with pencil and paper.

Congrats on your big news about next year’s Austen inspired short stories! I’ll pencil the release into my calendar!

If you want to look at some antique 19th century pencils and pens, go to
http://www.loringpage.com/pens/penhome.htm
~Jo~

Pat, are you a RWA member? They’ve been sending out announcements. I hope you can get a refund in these exceptional circumstances.

Thanks for the link, Joanna–what a great collection!

I LOVE the cumberland Pencil Museum! I’m always sad when it appears on lists of ‘the ten most tragic subjects for a museum ever’ because I think it’s great!

There is a story that when Russia and America were involved in the Space Race, the Americans spent a zillion dollars inventing a pen that would write upside down, in zero gravity, anywhere. The Russians used a pencil.

One more reason to use a pencil — I love the feeling of accomplishment I get as I watch the pencil get smaller and smaller as the point gets blunt and the pencil gets sharpened over and over. Then, finally, it no longer fits in my hand and I discard it and think about all the work I did.

I love a good, sharp pencil. I use them to do crosswords from the Crossword Puzzles newsletter that get sent to the house every month because all of them are quite difficult. I do the ones in the paper in pen.

When I write longhand, I do prefer a pen. The company that made my favorite pen began having a quality problem 2-3 years ago (sob – it was the Sanford Uniball, Microfine) and after the tips of several pens prematurely broke, I began my quest for a replacement favorite pen. I’m still looking.

I have a glass pen that I had to put away because the devil cat used to love trying to knock over my ink bottle. Scary! I should pull that out again. It is a lovely pen…

And I, as you may have guessed, am a pen geek.