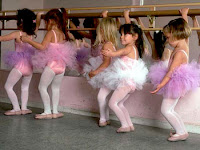 So, I’ve been a bit crazed the last few days with a Looming Deadline (3 weeks away, ack!) plus a weekend full of holidays and parties (Mother’s Day, graduations, etc) and I had no idea what to write about today. So I did a search to find out what sorts of fun things happened on this day in history. I discovered that Italian ballerina Fanny Cerrito was born on this day in 1817 (she was a prima ballerina at La Scala and one of the pioneers of dancing en pointe. She also lived a very long life, until 1909, and was able to see the Ballet Russes perform). I also found a factoid that said the waltz was introduced in England on this day in 1812. I could find no confirmation of this, which seems a bit suspect. How could they know what day that happened?? And it seems like it would have been a bit earlier, though I’m not sure. Still, it’s fun.

I’ve been thinking about dancing a lot lately. I started a new part-time job, teaching a ballet class for 5-year-olds on Saturdays. Right now I’m helping them get ready for their recital in June (it’s an “Alice in Wonderland” theme, and this class is going to play the pack of cards in little white tutus printed with card faces. SO Cute!), but then I’ll teach a smaller class for the summer, for students who are “more serious” and don’t want to lose a couple months of lessons. So far so good. The first day I thought those 5-year-olds were going to kick my butt–I have never seen so much energy in one room before, all bundled up in adorable black leotards, pink slippers, and hairbows. They’re extremely enthusiastic in their plie-ing and jete-ing and can do a mean fifth position. But we’ve come to an understanding now, and I’m having lots of fun with my tiny Pavlovas. We may have to have a Regency “waltzing party”!

And I pulled a few books off the shelf to try and find more about the history of the waltz. (Gerald Jonas, Dancing; Richard Stephenson, The Complete Book of Ballroom Dancing; and Boyd Hilton, A Mad Bad and Dangerous People: England 1783-1846 were very helpful). It seems Montaigne wrote in 1580 of a dance he saw in Augsburg where the dancers held each other so closely their faces touched, and in the same period a man named Kunz Haas wrote “Now they are dancing the godless Weller or Spinner, whatever they call it”–seemingly a vigorous peasant dance.

By the late 17th century, ladies at the royal Court in Vienna were spun around the room to the tune of a 2-beat measure, which grew into the 3/4 time of the so-called Nach Tanz (“after dance”) and moved with a gliding step. Meanwhile the peasants enjoyed dancing something called a Walzer, which came to notice around 1750. Another country dance, the Landler (which can be seen in The Sound of Music!) spread from the countryside of Austria and Bavaria and into the towns and cities. The hopping motion of the Landler developed into a graceful sliding step, with a gliding rotation replacing the stamping rotation of the folk dance. It was said that while the nobility at Court still mostly danced their staid minuets, many of them were sneaking off to dance at their servants’ parties! (18th century Dirty Dancing??)

In the 1770s, a visitor to Vienna named Don Curzio wrote, “The people were dancing mad! The ladies of Vienna are particularly celebrated for their grace and movements of waltzing of which they never tire.” Deeply shocking when first introduced (the couples faced each other! And touched more than just a hand!), the waltz was all the fashion in Vienna by the 1780s and spread across Europe. In England, it was still considered “riotous and indecent” in 1825! (It’s a good thing they never went to a tango party!). Young ladies did not waltz without express permission. The scandalous Caro Lamb was especially fond of having “waltzing parties” in her drawing room, which should tell us something. But the waltz is now the precursor to many of the ballroom dances we know today (like quickstep, foxtrot, etc). Of course, the waltz of the early 19th century looked quite different from what we see on Dancing With the Stars (as you can see from the YouTube video below, which I so much enjoyed watching!)

What are your favorite dances (or dancers)?? Any good dance recital stories? (It seems when I was about 3 and in my very first performance, I brought the ballet to a screeching halt by sitting down onstage in my tutu to examine some confetti. I have no memory of this and deny it). What are you up to this Tuesday?

Cool! There’s a wonderful collection of dance videos and manuals online at the Library of Congress:

The hold demonstrated in the 1816 waltz is interesting–the man’s hands are both on the woman’s back just below her shoulderblades.

I love dancing, watching and doing, but don’t do nearly enough of either.

Oh, I hope you can get us some photos of your little Pavlovas in the recital. Glad you whipped them into line.

I remember seeing Cara and Todd demonstrate a Regency era waltz at one of the Beau Monde soirees one year.

The dance videos Janet mentioned are really very interesting. There really is nothing like actually seeing the dance performed.

The piece I saw said the waltz was allowed at Almack’s on this date back in 1812. Which I could buy a little more since we know that Almack’s didn’t exactly move with the times. I think it’s so funny that you posted about this today because I was reading a Regency and the hero and heroine where talking about their waltz together and I just thought “Wouldn’t that be exciting to be granted permission to waltz and do it with someone you actually like” So much better than stupid slow dancing now.

I was also reminded of my first slow dance with the guy who would become my first boyfriend. I was 13 and we danced to Guns n Roses’ November Rain. The song lasts like 10 minutes and the guy kept complaining about the song never ending. I took that as a bad sign, but he walked me home and kissed me and tada! First boyfriend.

Thanks so much for posting that link, Janet! Just what I needed when trying to finish this WIP, an excuse to spend some time online. 🙂 Great stuff.

LOL, Jane Austen. My first slow dance was to a Madonna song in my middle school gym, decorated with a few pitiful streamers. It wasn’t much like Almack’s, but I do treasure the memory.

Oh, your job sounds cute as heck! I hope you get pix, too.

I took dance class, a gazillion years ago, but hated it, so I have no fond memories of it myself–I think we got yelled at a lot, if I recall.

But when we could do free form dancing, I had a blast at dances, since I love to dance. Just not regulated dancing.

What a horrible class you must have had, Megan! I don’t remember ever getting yelled at–even when I spun the wrong way. 🙂 And I would never yell at one of those kids, though sometimes it’s hard not to laugh at them because they are so darned cute. 🙂

We do a “free dance” at the end of class, where we bring out mats and they can do whatever they want–jump around, turn somersaults, whatever. I love that part.

I can’t dance but I learned Waltz once, informally. It’s great fun. But I think I like folk dances best. The music is very jolly.

Enjoyed the post and the video.
I love to dance, but my husband and I just don’t manage to do it well. I’ve been told I keep trying to lead. I want us to take lessons, but so far, no luck.

When I was in the Peace Corps in the Philippines, I did a lot of dancing. The Filipino men were terrific dancers. I worked with the elementary teachers and tried to do the same duties. They were the town folk dancers, so I became one. For three years I performed with the teachers at Fiesta and many other celebrations. I even performed for President and Imelda Marcos when they visited our town. It was great fun.

They have Contra dances here and I managed to get my husband to go once. It was great. However, I discovered my inner ear isn’t what it used to be. I got really dizzy at first. It was a great workout, but so far I can’t get him to go back.