The Last Muse–And A Giveaway! 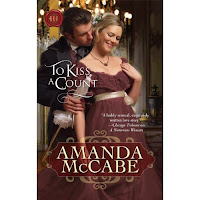 I’m so excited this month (June) to see the launch of the last volume of “The Muses of Mayfair” trilogy–To Kiss a Count! It’s been quite a whirlwind trip with the Chase sisters and their gorgeous heroes, and I’m happy to see them all settled with their HEAs–though I’ll also miss them a lot. I had a lot of fun in their Regency world, and maybe one day I’ll be able to re-visit them and see how they’re faring. To celebrate today, I have a prize for one lucky commenter– a signed copy of To Kiss a Count, plus a copy of Maggie Lane’s A City of Palaces: Bath Through the Eyes of Fanny Burney (I found two copies of this on my shelf when I cleaned out my books this winter!). 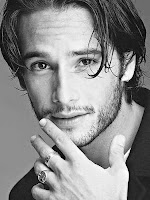 To Kiss a Count is the story of Thalia Chase, the third of the Muses, and what happens when she’s reunited with the dark, dimpled, charming–and mysterious–Marco, Count di Fabrizzi. Thalia is the most beautiful of the sisters (the heroine on the cover actually looks very much as I pictured her while writing the book! Marco–not so much. My Marco was Rodrigo Santoro!). She’s also the most musical and artistically talented. But being the youngest, her older sisters tended to protect and cossett her, keeping her away from their adventures when all she wanted was to help them and do her part as Chase Muse. Clio finally realized this at the end of To Deceive a Duke and utilized Thalia’s talent as an actress to catch a villain (almost). When Thalia met Marco in that story, she certainly got more adventure than she bargained for! And she also fell in love with him. But they had to part, and she returned to England to try and mend her heart. But fate isn’t done with Thalia and Marco just yet.

Thalia journeys to Bath with her eldest sister Calliope (from To Catch a Rogue). Cal is recovering from the difficult birth of her daughter Psyche and goes to Bath to rest and take the waters. Thalia wants to help her with the baby, as well as find some fun distractions from her memories of the excitement of Sicily. Then Marco appears in the Pump Room–with the villainess Lady Riverton on his arm! (Lady Riverton also appeared in To Deceive a Duke…) Thalia knows things are not what they seem–and she won’t rest until she finds out what’s going on. She and Marco have to unite to save the ancient silver hoard while they try not to fall even more in love. But of course that is impossible!

I loved writing this story, especially since it’s set in the gorgeous city of Bath. By the time of this story, Bath was a bit past its prime, but it seemed like the perfect place for these scholars of antiquities, with its rich Roman and medieval history. (It also has some secret spots in the hills and caves just right for hiding contraband–and having secret trysts!). The museum of antiquities Thalia and Marco visit is my own invention (though the objects they look at are based on some found in the Roman Baths museum), but I used many real sites as well–the Pump Room, the Assembly Rooms, the Theatre Royal, Sydney Gardens, and Mollands pastry shop. One of the most fun research books I came across was Walks Through Bath by Pierce Egan, published in 1819, which gave me some fun tidbits to use in the story. For instance:

“Upon gala-nights (in Sydney Gardens) the music, singing, cascades, transparencies, fire-works, and superb illuminations, render these gardens very similar to Vauxhall. The Orchestra is close to the back of the Tavern, neatly arranged and elevated, with a large open space before it well-gravelled…The walks are all well rolled and gravelled; and seats and places for refreshment are to be met with in various places of the gardens. There are also several swings, adapted for the ladies, and others for gentlemen.” 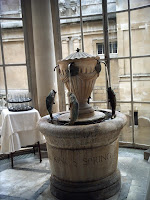 There are also great descriptions of the Labyrinth (which Thalia and Marco walk through), which “might puzzle any cunning person if left to himself and without a clue, for six hours.”

(At the end of this post I’ll list a few sources I enjoyed for Bath! I’m working on an article about the history of the city, and one about the history of the Italian independence movement which Marco is a part of, for my own website. Thanks to the Deadline From Hell, finally nearing its end, I’m behind on that. But be sure and visit anyway for a chance to win the whole trilogy and a gorgeous Muse pendant from Tartx! Only a few days left on this contest…)

And that concludes my Springtime of Muses! What are some of your favorite Regency settings (Bath, London, country estates, Waterloo)? Have you visited Bath–what’s your favorite site there? And which Muse would you want to be yourself?

Some Bath sources (and one Italian!):

George Holmes, ed. The Oxford Illustrated History of Italy
Joyce Reynolds & Terence Volk, The History of Sulis Minerva at Bath
Maggie Lane, A City of Palaces and A Charming Place: Bath in the Life and Novels of Jane Austen
Walter Ison, The Georgian Buildings of Bath
RS Neale, Bath 1680-1850, A Social History
William Lowndes, The Theatre Royal at Bath
Guidebooks for the Museum of Costume and Assembly Rooms, Number One Royal Crescent, and the Pump Room

I have flown into/out of Bristol, but have not taken the time to explore Bath (have been to the original baths in Rome and other Roman sites in England).

It’s hard to pick on Regency setting over the other (London, country, Waterloo) as they go hand in hand with the Regency experience. But it is almost surreal to imagine the Ton picnicking outside Waterloo to watch the battle. I have been to the memorial – the lion (Wellington) atop the mound (Napoleon) is inspirational in a mundane location.

One of my favorite settings for Regencies is Bath–I feel as though authors can make it more real rather than the traditional London setting.

Congratulations on the release, Amanda! My copy arrived last week. V. excited about it.

Megan, I think that’s so true! I really had fun writing this story because I could picture it so clearly, the parties and when my characters walked down the street. I guess the city was a “muse” for this one! 🙂

Kim, I would love to see any pics you have of the memorial! I definitely want to visit there one day.

I have not visited Bath but how much fun would that be? I can’t wait to read this story. Yes, they will be missed. Oh and love that cute pic of you!

I have never visited Bath. I love books set in all areas of England. To Kiss a Count sounds great. I love the cover. You look lovely in the photo.

Congrats on your new release! This sound like a fantastic series and I can’t wait to read it. I travel in books and this is the only way I get to visit these places!

I think this new book sounds great! I haven’t read the others, so I will need to get them.

Oh, I remember when you and Deb Marlowe and I were in Bath dancing at the Assemby Room! What a wonderful memory.

Congrats on your upcoming release!
I would love to visit all the locations of Regency England, and I hope to do so in the next five years at least.
I love settings at a country estate, so many opportunities for a clandestine dalliance!

I love Bath for a setting (and I’ve used it, too) with a major scene in Sidney Gardens, but my favorite city in that area is now Bristol.

Congrats on the book, Amanda!

I love Bath more than anything. I am going to the UK in October and am trying to decide where I should stay: Bath or Salisbury. I’m going with my parents and they want to see Stonehenge, but I think my mother and father would like Bath for different reasons. Mom for JA and Dad for the Roman stuff. I’m sure I mentioned this before, but when I traveled around Europe I bought charms from everyplace I went. I didn’t do it on purpose. I just saw sterling silver charms that would last some time, were small since I didn’t want tons of space taken up in my luggage and were relatively inexpensive. I bought a bathtub from Bath, which might just be my favorite charm.

I do love Bath, but I also have a fondness for Tunbridge Wells, which is not used at all that I know of in Regencies. Reading your post on Bath makes me long to go back. I just picked up a book called Walks in Jane Austen’s Bath which is a lovely little book with four or five walks through the Bath that Jane Austen knew. Now I want to watch Persuasion again with Amanda Root and Ciaran Hinds.

I think it would absolutely wonderful to get together some “historical” friends for the Jane Austen Festival in Bath in the autumn! Too much fun. 🙂

Jane George, I was re-watching part of “Cranford” a few nights ago and was just thinking how much I love the “village tableau” sort of story. I wish we saw more of it in romance! (I’ve also started watching “Lark Rise to Candleford”, thanks to Netflix, and it’s also enjoyable in that “group of village characters way”! Funny to see silly Lydia as the wise, sophisticated one…)

Congrats on the newest one Amanda! Can’t wait to read it!

I visited Bath when I was a child of nine and the thing I remember were the actually baths – the roman ruins, etc. It made quite an impression on the young girl from Alabama. Another city of which I am fond is Canterbury. Lovely old city and fabulous cathedral.

I tend to lean toward dark, Gothic sort of locations for my own book. The lonely manor house on the windswept moor or at the edge of the sea.

Please let me know what you think of Lark Rise to Candleford. I want to buy it, but haven’t yet.

I’ve never been to England, but some of the Regency settings I enjoy are country estates and Bath. The Roman history and all of the famous sites of Bath are a great backdrop for a Regency story.

To Kiss a Count sounds like a wonderful book and I’m looking forward to reading it.

I’ve only watched about half of Season One so far (saving it for “treats” after I finish this WIP!), but so far I’m really enjoying it! A great mix of characters

I loved Bath – been twice and want to go again! The water is beyond disgusting to drnk – I don’t know how people forced it down!

The cover of the book looks really nice Amanda. Good luck with sales!