I finished writing the latest book, just in time! Yay! I then spent most of the weekend lying on the couch in my pajamas, watching my brand new season 2 DVDs of True Blood (I will clean the house this week, I promise! Then on to the next project).

The last episode of the season made me realize it is now June, and I have several weddings to attend this month! Must get outfits together and wrap presents. I’ve done my share of time performing bridesmaid-ly duties, though I have to admit nothing quite like on True Blood. “You have to buy that overpriced chartreuse taffeta strapless gown and the dyed-to-match pumps” is not as bad as “You’re the maid of honor–you have to lick the egg” (the height of bridezilla-ness, IMO). I decided to look up the folklore behind some of our best-known wedding traditions (keep in mind these are only traditions, and many have several reputed origins): 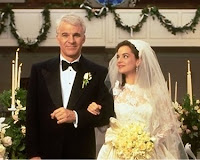 –The custom of going down on one knee goes back to the chivalric tradition. when a knight would kneel before a tournament and wait for his chosen lady to give him her favor. (I also read this might originate with the custome of genuflecting in church, which gives proposing a solemn, sacred overtone)

–Engagement rings can be traced back to the Anglo-Saxon period, when the gift of a ring came to symbolize promised/eternal love. Late the diamond became popular because of its strength and hardness. Ancint Egyptians presented their brides with circlets of rushes or hemp (not quite the same as platinum and a princess-cut). There are several theories about the third-finger placement–the custom dates back to ancient Egypt or Rome, where it was believed the ring finger followed a vein to the heart.

–The ring pillow originated from the cushion a coronation crown was carried on (though I doubt any monarch would dare trust their cushion to my cousin’s four-year-old, who stopped in the middle of the aisle and tried to swallow the ring…)

–Marriage announcements (or save-the-date cards) might come from the banns, which were posted a few Sundays before the intended wedding to give people a chance to object to the marriage if the bride or groom was already married or engaged/crazy/otherwise unable to wed

–A best man once had to help the groom kidnap the bride and then guard the church door until the deed was done, in case her family tried to save her. Sounds more fun than hosting a stag party and guarding the ring from being swallowed by the ring bearer. The bridesmaid was supposed to be dressed like the bride to confuse the (supposedly idiotic) groom. Also the bride stands to the left so the groom can keep his sword arm free, and the bride is carried over the threshold because if she tripped and fell it would bring bad luck.

–The honeymoon also arises from the capture-the-bride tradition. It was a “cooling off” period so the bride’s father could calm down and come to see the advantages of the marriage. It was also said the bride’s father would provide his new son-in-law with mead (made from honey)

–Bridesmaids and groomsmen have their roots in ancient Rome, when law required 10 witnesses, which would fool bad spirits who come to the wedding with the purpose of causing mischief.

–The idea of a white satin gown goes back to Queen Victoria (other high-class brides wore white if they chose, but she made it a popular thing, as did her daughter Princess Vicky). The very elaborate styling of the gowns can be attributed (blamed?) on Empress Eugenie, the very stylish wife of Napoleon III. The white became a symbol of purity and honor. The white was also thought to ward off those evil spirits (this didn’t work in True Blood), and some traditions say a bride should never sew her own gown, never try on her whole ensemble before the big day, and wait to have the last stitch placed just before she enters the church). The veil goes back to a Roman tradition of a bride wearing a full-length veil that would later be her shroud (ew!), the sack tossed over a bride’s head when she was kidnapped by the groom, or one more thing to confuse those wedding-going spirits. Or it might be to keep a groom who hasn’t yet seen his bride from running away when he finally gets a look at her (maybe this is why the bride and groom aren’t supposed to see each other on the day?) 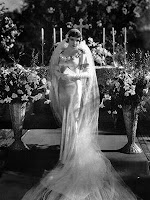 –The bouquet started as a bunch of fragrant herbs that (you guessed it) kept away evil spirits. Roman brides wore these as wreaths on their heads, and Victorians liked to have the blossoms of the bouquet carry a message. The bouquet toss started in the Middle Ages, when guests wanted to tear off bits of the bride’s gown for good luck (thus the toss, to keep her clothes on and intact). The groom’s boutonniere goes back to that chivalric tradition of wearing one’s lady’s colors.

–Something Old: the connection the bride will still have with her family and her past
Something New: the good fortune of her future life with her husband
Something Borrowed: reminds the bride her family and friends are always there for her
Something Blue: symbolizes faith and loyalty
A Silver Sixpence in Her Shoe: the wishes for the bride to enjoy financial and domestic security

–The kiss at the end of the cermony once made the union legally binding (and it was thought the couple exchanged souls in the kiss!)

–Throwing rice (or bird seed) at the couple originated in ancient Egypt and Assyria, where the guests would throw grains to symbolize prosperity, fertility, and to scare away those spirits. The cake also started out by being not eaten but thrown in yet another fertility ritual. Somewhere around 100 BC, Roman bakers started making small, sweet cakes out of the wheat that was traditionally thrown and the cake was broken over the bride’s head (or thrown at her, poor bride), and the couple had to eat the crumbs. In old England they started washing down their cakes with an ale called “bryd ealu” (bride’s ale=bridal)

And there you have it! All you need to know when you attend those June weddings. (I do wish I knew why June became the wedding month–it’s hot and humid here, not really a good time to get dressed up in satin and go drink ale!). What is the best wedding you ever attended? The worst? What’s your favorite wedding tradition? (I hope it’s not licking the egg…)

I had to work a wedding reception this weekend. I didn’t really have to do anything but hang out in the building until it was over so I knew no damage came to the building. The bride did make me laugh though. She said she wanted a really elegant wedding, but she used plastic tablecloths, plastic silverware and plastic plates. To me that is just not elegance. On the plus side it cleaned up really fast.

One of my favorite weddings isn’t really one I’ve been a guest at. I read about it. It is Llewellyn’s marriage to Simon de Montfort’s daughter Elen. Elen was in France and Llewellyn in Wales so Llewellyn sent his best man to act as his proxy. (I think that having your best man and maid of honor get married for you by proxy would be the funniest wedding trick ever). Then as Elen was sailing to Wales she got captured by pirates arranged by Edward I or Edward the Bastard as I call him. I believe she was his cousin. Evetually Llewellyn got his bride back, but he had to agree to some pretty ridiculous things. Then it didn’t matter anyway because Edward still attacked Wales, killed Llewellyn and imprisoned his child, a daughter whose birth cost Elen her life, in a convent. So sad ending, but quite the fun wedding.

My favorite wedding tradition is the one my husband and I created where he played two recorders out of his nose. Very moving and tasteful.

No way I can top either Jane Austen’s favorite wedding or Janet’s very…um…creative wedding tradition!

I liked my wedding a lot. I wore a Regency dress and the reception was not too fussy.

Some of these I knew already, but most of them I didn’t–awesomely cool!

I have no weddings to attend, thank goodness, but I do have plenty of True Blood to look forward to. Cannot WAIT for June 13.

Congrats on finishing the book!

LOL, Jane Austen and Janet! I do love to hear about such elegant weddings. :)) I don’t usually mind attending weddings as a guest–free cake! It’s the bridesmaidly stuff that can be a pain…

Megan, I am counting the days to June 13 too! Especially now that I’ve had a “True Blood” refresher course over the weekend (though watching the whole second season over a weekend might have been a little crazy!)

Can’t wait ’til True Blood comes my way on NetFlix!

Great post, and where does that last photo come from? I’m intrigued.

Jane, it’s another pic from “True Blood”–the others are the 2 “Father of the Bride” movies, and Claudette Colbert in her gorgeous gown from “It Happened One Night”

I don’t watch True Blood. Can you explain “licking the egg” or don’t I want to know?

Fortunately the gown I chose for my bridesmaids was in a style they could later cut and wear as a cocktail dress or at least that is what most of them did. My wedding had an international flair as my dear friend, Muriel traveled from her home in France to be a bridesmaid. It was held in my college chapel and the reception was in the formal parlors of Jewett Hall, a building dating from before the Civil War. The silver and crystal we used were the same silver and crystal that the students buried in the cemetery across the street to save it from the Yankees. I had a sixpence in my shoe, a tradition in my English/Welsh father’s family. And the best part? The music, of course! The chapel had a brand new Flentrop organ, one of the few in the US at the time. The recessional – Widor’s Toccata for Organ rattled the windows!

With the onset of autumn wild birds will have started migrating from one place to the other. And in many cases feeding these birds becomes a treat to the eye. But in order to attract a variety of birds it is essential to have the right kind of wild bird food. Along with this you also need to gather knowledge about different varieties of bird feeders, nest boxes and bird baths that attract birds.:

Pay a visit to our own webpage as well
<.http://www.beautyfashiondigest.com/best-mineral-makeup/

Wild bird food preferences vary with bird species. While birds like pigeons and doves will readily eat any bird food given to them, more specialist feeders like Robins prefer small grubs such as mealworms. You can buy bird food from various outlets that have large stocks of bird food available in various weights depending on your requirement. Guides to feeding garden birds can be researched online or from various gardening bird books that give details about wild bird feeding habits. The autumn season can attract a large number of wild birds to your garden with the right food including siskins, goldfinches, great tits, blue tits, wrens, woodpeckers and many more. Each one of them has a different feeding habit and accordingly people can make use of different bird feeders and feeding locations within their garden to encourage them. ..