I almost forgot that To Kiss a Count is not the only book I have out in June! I also have a re-issue of two of my older Signet Regencies, Lady Rogue and Star of India, out together as Rogue Grooms. Star is possibly my very favorite of the Signet Regencies I wrote, with a heroine who appeared in an earlier book (she was the hero’s sister in Lady Rogue, and I fell in love with her!), a half-Indian hero, and a mystery surrounding a “cursed” sapphire (the Star). So I’m very glad to see it out there again! 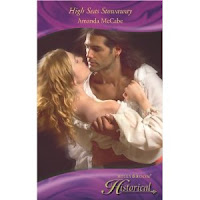 I also have a UK release, High Seas Stowaway, which has a bonus of my “Undone” short story Shipwrecked and Seduced included. (It can be ordered here). And there are some updates on my website, with more info on the “Muses” and some future releases. In the meantime, it’s on to the next project! And a summer of watching new episodes of my favorite shows, True Blood and Mad Men! Yay!

In researching possible topics for today’s post, I found out that the actress Sarah Siddons (possibly the most famous theatrical figure of the Regency period) died on June 8, 1831. I’ve been reading a lot about the theater of period for a new project, so dug out whatever I could find on her life and did some reading. 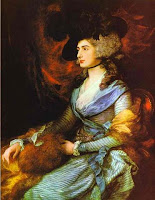 Siddons was born Sarah Kemble in the town of Brecon in Wales on July 5, 1755, into a famous theatrical family. Her father was the actor-manager Roger Kemble and his wife, the actress Sarah (Sally) Ward. The junior Sarah was the elder sister of actors John Philip Kemble, Charles Kemble, and Stephen Kemble. Though initially her parents were a bit reluctant to see her enter the family profession, her obvious talent won them over. She had her first great success as Belvidera in Otway’s popular Venice Preserved in 1774, which brought her to the attention of the famous actor David Garrick, who engaged her to perform at Drury Lane. But she was still young and inexperienced, and her appearances as Portia and other Shakespearean heroines flopped. In her own words she was “banished from Drury Lane as a worthless candidate for fame and fortune.” Poor Sarah!

She went on tour in the provinces for the next few years, and worked in York and Bath, building up a reputation and honing her craft. When she went back to Drury Lane in 1782 things were very different. She had a huge and immediate hit in Isabella, or The Fatal Marriage, adapted by Garrick. She then took on her most famous role, as Lady Macbeth, which held audiences in rapturous silence (an oddity in those exuberant theater-going days!). She had a tall, striking presence that was perfect for the part. She also had hits as Desdemona, Rosalind, Ophelia, Volumnia, and Queen Catherine in Henry VIII (which she said was her own favorire role).

For over 20 years she was the tragic queen on Drury Lane. She maintained a scrupulously respectable reputation (she married actor William Siddons in 1773, at 18, and even though it was not a happy marriage she maintained appearances. They had 7 children before separating) and had intellectual friends in high places, including Samuel Johnson, Hester Thrale, Edmund Burke, and William Windham. It was said that “even the Duke of Wellington attended her receptions, and carriages were drawn up before her door nearly all day long.”

In 1802 she left Drury Lane and went on to appear from time to time at its rival theater Covent Garden while being mostly retired. On June 29, 1812 she gave her farewell performance as Lady Macbeth. The audience refused to allow the play to go on after her sleepwalking scene and persisted in loud applause and tears until she appeared and gave a speech. (Though she did still make special supporting appearances in plays once in a while until 1819). She died in London in 1831 and was buried at St. Mary’s Cemetery at Paddington Green. 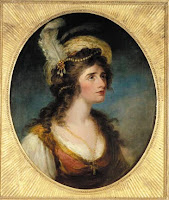 If you could go back in time and see any artistic performance in history, what would it be? And what are you looking forward to this summer???

If I could go back in time, I think I’d see Ian McKellen performing Shakespeare as a young actor.

Congrats on the book releases! Elizabeth did a GREAT job reading at Lady Jane’s last night.

Thanks Megan! I would love to go back in time to The Gilded Age or the 1920’s. I’ve had the pleasure of seeing Ian McKellan on stage, not when he was a very young man, but I did see him in Amadeus.

Amanda, I saw your Signet re-release last week at Borders.

On the going back in time question, I’m torn between going to 1590’s London to see a debut of one of Shakespeare’s plays, probably either Much Ado About Nothing or Henry V, or being in Dublin in 1742 for the first performance of Handel’s Messiah.

Ammanda, I hadn’t realized you were having such a bang-up release month this June. “WOW!” seems like an understatement to your productivity.

Elizabeth, OMGosh. Ian McKellen in Amadeus? Just the thought is swoon-worthy; reality must’ve been quite something.

For the summer, I’m looking forward to RWA and then London with Milwaukee in between.

If I could travel back in time (always with the guarantee that I can hightail it back here to modern times whenever I want), I’d like to attend a medieval feast with dancing, music, short baudy skits, and foooood.

I think that I would like to see Olivier in something. Not sure what, but just to see him on stage. In January I saw A Little Night Music starring Catherine Zeta-Jones and Angela Lansbury. Part way through the performance I realized “Wow! Angela Lansbury is breathing my carbon dioxide. That’s crazy!” I’ve seen some great shows in my time. But Olivier would be special.

Elizabeth, I heard you were fabulous at Lady Jane’s last night! I can’t thank you enough for standing in for me. Hopefully I can make it there again very soon. 🙂

Everyone has such a busy summer coming up! I have RomCon and RWA, but no more travel until fall, just writing and staying in the AC. Jane A., I am so jealous you got to see “A Little Night Music”!

Keira, I totally agree that any time travel MUST have a return guarantee. 🙂 I’d love to visit the Globe when it was new and see a Shakespeare premier, but not if I had to stay in the 16th century! I got to visit the new Globe a couple years ago, and I guess that’s the closest experience I’ll have…

This summer my only highlight will be the RWA Conference in Orlando! I can’t WAIT to see everyone!

I’d like to have seen Sheridan’s The Rivals at Covent Garden.

And our vacation this year will be visiting relatives, so RWA will be my exciting trip.

I’d like to go back to the first few Romantic Times’ Booklovers’ Conventions to meet the original divas of romance!