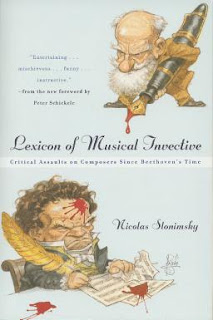 My husband the music expert is currently amusing himself with this book, Lexicon of Musical Invective: Critical Assaults on Composers Since Beethoven’s Time, by Nicholas Slonimsky. On the cover, GB Shaw wields his mighty weapon and Beethoven receives a direct hit.

It makes for some fascinating and cringeworthy reading. Here, for instance, is a Viennese critic’s comment from 1804:

Beethoven’s Second Symphony is a crass monser, a hideous writhing, wounded dragon, that refuses to expire, and though bleeding in the Finale, furiously beats about with its tail erect.

More animal symbolism from a Paris critic of 1810:

Beethoven, who is often bizarre and baroque, takes at times the majestic flight of an eagle, and then creeps in rocky pathways… He seems to harbor together doves and crocodiles.

Whereas The Harmonium, London, in 1823, took this no-nonsense approach:

Opinions are much divided concerning the merits of the Pastoral Symphony of Beethoven, though very few venture to deny that it is much too long.

And moving right along, in my Internet search for more music criticism articles, I ended up here, which is appropriate in a way:

By 1815 London had expanded beyond its medieval walls and the populace had grown to 1.4 million. People began to generate waste at an unprecedented rate. [italics mine]

Now I don’t believe the author of the article, Night-Soil Men, the Human Waste Collectors of Georgian London, meant that, uh, personal production increased, although that was certainly the first thought that came to my mind. Anyway, read the article for everything you always wanted to know on this topic. Isn’t the internet a wonder?

I’d also like to direct you to a fabulous site, Georgian London, a terrific, smart, well-researched resource. I was thrilled to learn that the site owner, Lucy Inglis, will be speaking at the RNA Conference in July, on “Trades for 18th-century women.” Can’t wait! And I’m speaking on a panel about writing for UK and US markets.

I expect you’ve seen the news about the discovery of the world’s oldest shoe (5,500 years old, found in Armenia).

And since I’m encouraging explorations online, please drop by my website to read an excerpt from Jane and the Damned.

Recently I was reading the book The Thriving Library. It had a challenge in it where librarians went up against patrons and tried to come up with a two word search query in google that would only offer one result. It’s a lot harder than it looks. I’ve been trying and haven’t been able to do it yet. How about anyone else?

Well, you can certainly say that Beethoven touched a …..chord!!!

My last internet search involved looking for ruins of an Abbey in England on which to base a scene in my wip. Then I started reading up on the Reformation…and ghosts that haunt abbeys.

The Georgian London blog is great! You now owe me forty-five minutes of my morning.

My most recent searches went from chimney sweeps to the island city of Janitzio in Mexico. A bit more focus may be called for, lol.

Off now to read your excerpt! Then I must get ready for my daughter’s 8th grade graduation…

I have to agree with Jane George, Janet–you now owe me at least an hour of time. 🙂 What a fascinating site

I love that site, too, and I discovered it via the Georgian Group on Twitter. I’ve found so many interesting links and timesucks thanks to Twitter!

I love Lucy Inglis. Sh has wasted many, many hours for me. (ALWAYS blame the blogger). Can’t wait for Jane

The NIGHT SOIL MEN article was good information. I find it interesting that it was cheaper to import bird droppings from South America than is was to pay for cesspool waste brought from the neighboring large town.
I have taken too many journeys into the internet jungle to remember what the most unusual was. I do know I have been looking for one specific thing and ended up in some very different, interesting, and sometimes weird places. It is such great fun and such a surprise when you realize you have been following links and reading for 3 hours or so.
I am avoiding the Georgian site for now. We just got back from 2 weeks vacation last night and I really have much that needs to be done. I know if I start, I’ll be lost for way too long : )