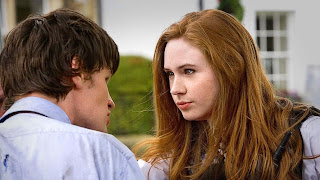 The Framptons have all been engaged recently in watching the new Doctor Who, and it’s a fascinating exercise in sexual tension and relationship-building.

Each Doctor has a companion, a human person who helps them in the whole Saving The World thing. This season, Doctor Who’s companion is Amy Pond, a feisty Scot who thinks nothing of dashing after vampires and facing danger in the teeth (so to speak) and all that.

But one interesting direction of the series is how close the two stand to one another. So close, in fact, that if it were in real life, you would think they were invading each other’s personal spaces. The doctor likes to speak rapidly into Amy’s ear, and she often leans up (he’s TALL!) to bite out some question to him.

Much, in fact, like our heroes and heroines, who are constantly getting in one another’s faces. As someone who visualizes the action in her head as she writes, this is really helpful to imagine what it feels like to be sparring with the object of one’s affection (even if you haven’t acknowledged him or her as such). Standing too close, invading the space around a person, makes the person feel “discomfort, anger, or anxiety.” Although it doesn’t lead to those feelings unless it then leads to warmth in certain regions and a desire to kiss the other person. In our books, at least (and in Doctor Who, where there was a KISS! Swoony!)

Have you ever deliberately shortened or lengthened someone else’s personal space? How does invasion of personal space make you feel? Which author has written the best demonstration of how personal space can affect the love story, in your opinion?

In high school, my friends and I were very adamant about our personal space in our mixed gender friend group. For us, our personal bubble was anything within arm reach of ourselves. If someone we weren’t comfortable with got too close, we’d squeal “Personal bubble!” and push the other person away.

Yes, the boys were THAT obnoxious.

I’m actually playing this game right now. There’s this guy that I work with and I’m very attracted to him and although we haven’t spoken anything about it I think he’s attracted to me too. We’re reading a book together which I think it super cute (damn I sound like a school girl) and we are finding ways to invade each other’s personal space, but it’s not a bad feeling. It’s fun to be at the beginning of something new.

Plus I just got contacted to do a phone interview for a job that I really really want so I’m even more excited! Wish me luck on my interview Tuesday.

There was a girl in our dorm freshman year of college who touched people when she talked to them. Always a hand on someone’s arm; it was so not cool.

And the new Doctor and Amy are great!

I’ve come close to biting people who press up behind me in a queue. And don’t even ask about hug-sluts.

I just started watching the new Dr. Who series with season one. Very fun so far but I was a bit turned off by the cheap laughs at the mother’s expense. I liked the Charles Dickens episode. Genuinely creepy. I look forward to working my way toward season five.

I’ll have to check our Dr. Who! I haven’t watched it for years.

I can’t think of a “personal space” scene in books, but I think it is used very effectively in the 2005 Pride and Prejudice, during Lizzy’s refusal of Darcy’s misguided proposal. You can feel the sexual tension between them in that scene.

Good luck with the interview, Jane Austen…and with the guy!

Thanks Diane. I’m really excited about the job interview and the guy. The job is in Baltimore and its with a college that basically embodies what I believe in. I’m incredibly excited.

Baltimore is a very cool place! I’ll keep my fingers crossed for you.

I like to stand as far away from people as possible. Not sociable at all.

“There was a girl in our dorm freshman year of college who touched people when she talked to them.”

Hey, I think I went to college with that same girl! I avoided talking to her whenever possible. đź™‚

I haven’t yet seen the new Dr. Who, but I loved the last two doctors. Can’t wait to see what this one is like. And I do like to write scenes where the characters are confined to a small space together (hiding or something like that) and are thus forced into proximity. Lots of fun!