Last weekend, I spent some time digging through my Big Research Box, looking for info for the RomCon workshop I’ll be taking part in at Denver in a couple weeks (“Stripping the Heroine,” all about what the historical heroine would be wearing!). My Big Research Box is, well, just what it sounds like–a big plastic storage tub with folders holding notes and articles and inspirational images. I try to be organized and divide them up by era and subject, i.e. “Regency–Architecture” or “Elizabethan–Music,” but often I get lazy and stuff things in wherever there’s room. So there was info on Regency fashion in several folders, and hours had gone by before I knew it!

It made me think about the importance of fashion and style to character and story. Even when I don’t describe what characters are wearing in a scene or what they have in their armoire, I can see them in my mind. What people choose to wear says so much about them–whether they know it or not. (One of my favorite style blogs, formerly-known-as-Project Rungay, have been doing an in-depth study of the costumes on Mad Men and how they delineate a character’s progress and state of mind. Great stuff!)

I also thought of this recently when I saw a great exhibit at the Oklahoma City Museum of Art, “From Sketch to Screen,” featuring a lovely selection of film costumes, from an elaborate court dress worn by Greta Garbo in Queen Christina and a white Givenchy suit worn by Audrey Hepburn in Funny Face, to superhero outfits from X-Men and Superman, it covers a wide spectrum. This concept of costume=characters is, of course, totally vital in a visual medium like film. Here are just a few of the costumes that were there (photos weren’t allowed so these are just movie stills; there are a few pics of the exhibit itself at the museum’s site): 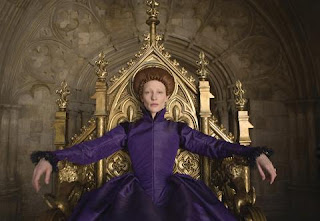 This purple gown from Elizabeth: The Golden Age 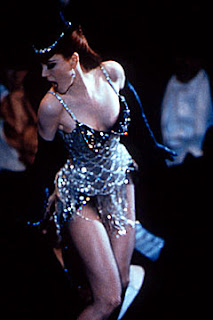 This little beaded leotard from Moulin Rouge (plus the hat and shoes!) 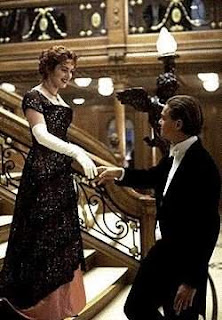 This dinner gown from Titanic (even more gorgeous in person! They also had the blue velvet suit) 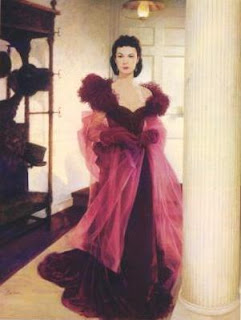 Three costumes from Gone With the Wind, including this one (though they are reproductions; the originals didn’t survive) 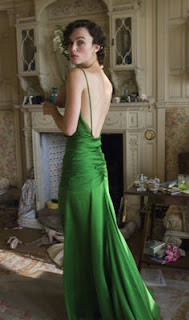 The famous green dress from Atonement, one of my favorites! (It wasn’t displayed very well, though, at least not for people who want to see details of design! The straps are too fragile for a mannequin so it was just sort of pooled in a little glass case with only the bodice able to be seen clearly. I wish it had been laid out full-length) 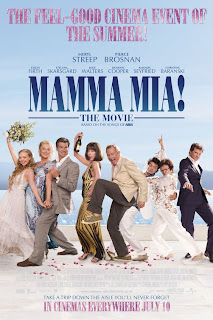 Some sparkly jumpsuits from Mamma Mia! 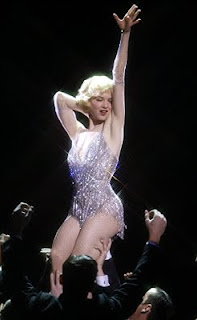 One of Renee Zellwegger’s sequined dresses from Chicago 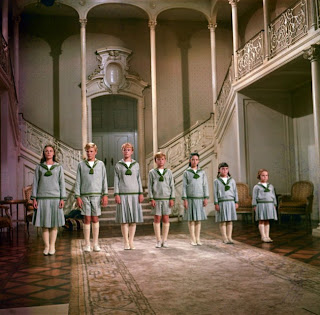 Two of the little sailor suits from The Sound of Music (so wee and cute!)

You can see how clearly these costumes represent the characters wearing them (and not just how annoyingly skinny Nicole Kidman and Cate Blanchett are!). Elizabeth I, Rose from Titanic, Guinevere, Scarlett, Cecelia from Atonement, are all right there in these garments, wrapped up in lace, beads, and silk. I found it to be a very helpful lesson in my own search for my characters. (And even though I would have loved to see a Regency movie included in the selection, I also liked the variety!)

What are your favorite movie costumes, or memorable clothes read about in a book? (I always think of Villiars in Judith Ivory’s Untie My Heart and the scene in the bank–that has to be the sexiest coat ever!). What do you think clothes say about characters?

(And if you’re in Oklahoma City before August, I highly recommend a look at this exhibit!)

What a great exhibit! I’d love to go. Just the pictures you provided are fascinating.

I once went to a workshop presented by Deborah Nadoolman, who created Indiana Jones’ costume. Very fascinating and totally made me think of dressing my characters in a new way.

Oh, what a lovely exhibit.
You’ll do great on that workshop, by the way.
RomCon is sounding so exciting. I can’t wait to hear how you all like it. It was not in the cards for me this year but maybe next time.

Looks like a great exhibit! I loved the clothes in the movie ANGELS AND INSECTS, although I’m not sure whether it was the clothes themselves or the cinematography that made the colors so vivid and beautiful.

In a book, I like Mrs. Gaskell’s description of Molly Gibson’s new gowns in WIVES AND DAUGHTERS, which include a highly fashionable flimsy silk tartan. The clothes in the TV adaptation were also wonderful (one of my favorite books and TV versions).

My all-time favorite costume, which still, after 40years, can make me laugh even before I hear the punchline, is the Bob Mackie designed Drapery Dress for Carol Burnett’s Scarlett O’Hara.

As for movie costumes that struck me, there are so many! I notice clothes in a film- whether they work with the character or are “just there” and also whether they are period accurate. (DH will get annoyed with me occasionally if I “harp” by repeatedly commenting “that dress is wrong by 20 years” or something similar.)

I must admit that two of my favorite museum exhibits are the First Ladies’ Gowns at the Smithsonian, and seeing Princess Grace’s wedding gown many years ago at the Philadelphia Museum of Art. Back in the late 1990’s a touring exhibit from Russia included many clothes from the Imperial Family- I spent way too much time for my companions’ looking at the embroidery and other details.

Just wish I could afford to dress the way I would REALLY like to, lol!

LadyDoc, I should go see the First Ladies Gowns. Haven’t done so in years.

I also was reminded of the very first scene of the BBC Beau Brummell movie, a beautiful slow-motion scene of him swirling himself into a white shirt….that opened all the way in the front. It ruined the whole movie for me. How could they get the CLOTHES wrong for this icon of male fashion whose influence continues today??????
(some of you may not know that men’s shirts of the period looked like this.

Amanda, I’m so jealous! I’d love to get a look at Scarlett’s “scarlet woman” dress up close (love the scene where Rhett tells her she WILL go to Melanie’s reception and face down all those who think she’s been having an affair with Ashley, so Melanie can throw her out, and of course Melanie stands by her.) I’d love to see the “green velvet portiers” dress, too.

Wish I were close enough to visit the exhibit!

I, too, have been enjoying the Mad Men fashion dissection…awesome costume designer!

I have been loving Larkrise to Candleford, especially the Pratt sisters outfits. I can watch period movies and shows just for the clothes.

Julia, they had the green velvet dress too! I was such a fan-girl, standing in front of the display for a long time. 🙂 They also had a blue velvet dressing gown trimmed with black fur–I think it’s from the scene where poor Bonnie dies, but I’m not sure. There was also a gown from the 1930s “Marie Antoinette” that was made for a lady-in-the-waiting in the background, and yet was astoundingly detailed, and a risque silver lame gown that Claudette Colbert wore in “Cleopatra” (must be pre-Code, LOL)

LadyDoc, I got to see the First Ladies’ exhibit just last year and it was wonderful! I saw it a long time ago on a trip to the Smithsonian when I was a kid, and it was very simple then–just a line of dresses on mannequins, mostly the Innagural gowns. Now it’s more varied and includes stuff like jewelry, shoes, fans, hats, china. I especially loved the Dolley Madison satin Regency gown, Martha Washington’s brocade dress (she was surprisingly tiny), and Abigail Adams’s slippers, as well as a one-shoulder yellow chiffon Jackie Kennedy gown. (they didn’t have Michelle Obama’s gown yet). I think they change out the items at times, so would love to see it all again!

Amy Kathryn, I’m now on season 2 of “Lark Rise” and really enjoying it! The Pratts’ outfits are hilarious (especially those “nautical” things last season), and Dorcas always looks so elegant. 🙂

I’ve found the “Mad Men” posts very eye-opening. It’s amazing how closely the costumes follow the characters’ and their state of mind and emotions at that moment. When I’m watching it, I’m always too busy thinking “Oooh, look how pretty Betty’s dress is!” to think about it so deeply!

Ammanda —
You need to get a copy of The Woman In Fashion by Doris Langley Moore (if you don’t have it already). Basically it was published in 1949 by one of the first fashion historian. The costumes are vintage dating from cira 1800 – the 1920s. The models are classic British film actresses from the late 1940s. Moore’s collection formed the nuclues of the British Fashion Museum in Bath.