Inspired by discussion on various loops and at History Hoydens…

The London residence of the Duke of S– was raided by the Regency Police and a large number of items, including a quantity of white powder in the kitchen, was seized. The Duke is subject to various offenses covered by the Regency Anachronism Act. 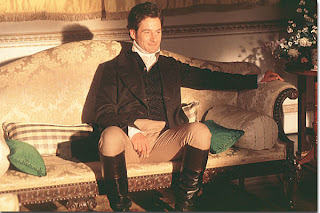 I wish to complain about the recent Regency Police raid on my property. My household is in an uproar and I have scarcely been able to escape to my usual dens of vice for entertainment. I wish to know the whereabouts of various items of clothing and, frankly, since the baking powder and whiskey were seized, breakfasts have been hell.

My mistress skulks around the house, furious that her red silk nightgown and her gown with the tiny buttons down the back, both of which we enjoyed immensely, have been taken. I am immensely distressed that, barring extraordinary circumstances and an appeal to the courts, I cannot propose marriage to her, which I wish to do following more mutual psychological torture to prove that I am indeed worthy of her.

My housemaid, who has lost the prestige of opening the front door wearing a black silk gown and white cap, skulks downstairs in her shift. Furthermore, my formerly doddering butler, who had forty years lopped off his age, seems more interested in exploring the fleshpots of London than attending to household duties.

On the other hand I must commend the police for removing all of my skintight breeches which means that for the first time in years I can sit when clothed, and do not split them every time I ride. You need not return these, or the implement (the “can opener”) which was necessary to their removal. My thanks also for reminding me that there is a war on, and I believe I have some younger brothers involved therein; also for the reminder that if they return pathetically scarred in mind and body, my fraternal advice will be to get over it.

The business of the shirts, however, is problematic. Since they all opened the wrong way, to my astonishment, and naturally I own no nightshirts, I am to all intents completely unclothed in my house. Despite assurance that I am now properly heroic, I find the continual attentions of my mistress exhausting. Following your advice, I am applying lemon juice daily to remove the tan and allowing my chest hair to grow back.

I remain, sirs, your most obdt. servt.,
Slut

What else did the Regency Police seize?

A Damned Good Contest continues; enter to win Jane and the Damned stuff!

OMG !!! Priceless, Janet! ROFLMAO This made my morning. Printing it and tacking it to my memo board as a cautionary tale to all of my heroes lest they suffer the same fate!

Yes to the tan. I’m always amazed that our heroes, returning home from their experience on shipboard or in various subtropical colonies, still have their tan months later and often in mid-winter. If we only knew their secret, tanning salons would immediately go out of business.

Several items have been loaned on a provisional basis until the owner can supply his/her own in a timely fashion:

-gloves for everyday (and we do mean *every day*) use
-hats (ditto)
-appropriate haircuts
-plain, boilable underwear
-nightwear for all
-more outerwear than just pelisses and spencers
-chaperones

Dear Duke,
This sounds like falderal. What the devil are you doing giving up your treasured silk nighties and perfectly good breeches to some Froggy notion as police? Unless you mean the Marine Police, but what are they doing in Mayfair? Make them stick to the Port of London.
While I am on this rant, who the devil gives the courts the right to tell you you cannot marry your mistress? I may be daft but, unless you are royal, you can marry that hoyden if you so choose, although I have often said you are lost to all reason to allow her residence in your house.

P.S. I did look up “psychological” and, by the heavens, it was used in the Regency!

Actually, that does bring up the “duke” thing. In the Regency period there were only 27 dukes in the entire British kingdom (if one gives a little leeway to account for those either created or made extinct within a vague approximation of that time). If you take out the Irish and Scottish dukes, that brings the total down to 20 — and if you take out the royals (who, indeed, could not marry just anybody), it brings the total to a whopping 13, and one of those is Wellington, who is probably a bit too big a name to just give to a random hero. (Devonshire might be as well these days, and Marlborough certainly ought to be.)

Much as I like dukes getting their hearts caught by passing milkmaids, the odds are slim (and socially unlikely) at best.

Both the illegitimate boy you wish to name your heir and the sister who will will inherit if you don’t decide on your heir have been placed into foster care. Miss Smith is ready and willing to marry you so as to produce for you an heir and a spare.

I cannot see for the tears of laughter in my eyes, but oh, I agree so heartily with this Regency Police Raid! All the things that most bother me about Regency historicals have been seized and I hope will never appear again.

That was wonderful. Still chuckling (at work no less). It will get me through the afternoon. Did they take his Hessians too? Just curious.

Ladies, you all nailed (so to speak) his grace. Thanks for entertaining me!

(Though I would argue slightly with Susan’s tan statement….I have tanned arms that will not go away, no matter how covered they are…but perhaps it only happens if one became tanned in childhood???)

It is with the utmost respect that I humbly beg to also seize your mistress’s gowns which lace up the back like Victorian corsets (whatever they are).

I also insist on seizing this completely dependable, never-fail form of contraception which your mistress’s aged aunt has provided for her.

You are forbidden to have scones for breakfast.

Your suddenly young butler needs to learn something about silver and wine if he is to continue.

And for the love of all that is good, do stop playing two-person whist and four-person piquet, and cease your well-known skill at card games that rely entirely on luck.

Oh dear, I’m wiping the tears from my eyes to tell you that the poor Duke’s woes are the funniest thing I’ve read all week.
Now that all our heroes and heroines are stripped of their illegal clothes, food, drink, etc etc, what are we going to do for characters and plots???
Nothing left to write about?
Suzi

I think the Hessians can stay, Amy–OED gives 1806 as a date for usage of that term for boots.