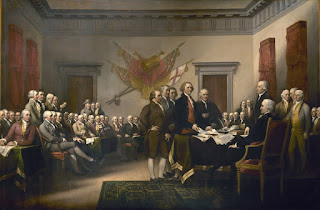 “We hold these truths to be self-evident, that all men are created equal, that they are endowed by their Creator with certain unalienable Rights, that among these are Life, Liberty and the pursuit of Happiness.” Preamble of the Declaration of Independence.

Yesterday Americans celebrated the 234th anniversary of the approval of the wording of the Declaration of Independence (not its signing as is commonly believed). We celebrate this as the beginning of our country, although there were many years of hard fighting to go before the United States of America existed as separate from mother England.

In spite of our problems as a country, it is extraordinary that we have been as successful as we have been at living up to these principles of all “men created equal” with equal right to life, liberty and the pursuit of happiness. And I’m filled with pride at how well we have done, though it has taken 234 years to get this far and we still have a way to go. Discrimination is still practiced, I’m sad to say. 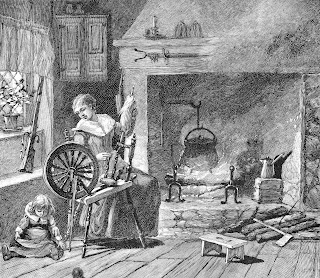 But today for Risky Regencies, I’m thinking about what it must have felt like to those “colonists” who considered themselves Englishmen and suddenly found themselves forming a separate nation. They could not have known that this country would succeed. How much trust could they put in this fledgling government? It must have been a very exciting but hard time for all.

During the Regency, in addition to the Napoleonic War, England fought in America again, in what we call The War of 1812. This time the United States of America declared war on England for impressing American citizens into the Royal Navy and for England’s military support of Native Americans who were preventing American expansion into the Northwest. Ironically it was this war that really solidified America’s independence from England. After America’s victory, England respected America’s sovereignty.

A few years ago I attended the annual Battle of Bladensburg (of the War of 1812) reenactment at Jefferson Patterson Park in Maryland with Mary Blayney (see her interview here July 18) and I took a photo of this authentic British reenactor!

I wonder how many people in the US still had split loyalties. Were they all solidly American, as we would like to believe? Or did some of them hope the War of 1812 would put this country again under English rule? One also wonders what would have happened if Wellington had been sent to the US instead of Spain.

Another question. Why aren’t more Regency Historicals using the War of 1812 in their stories?

Visit my website today for a sneak peek of Chivalrous Captain, Rebel Lady and for a new contest. And come back again on Thursday for Diane’s Blog.

Good post, Diane. Isn’t it strange how the War of 1812 is often overlooked? I wonder, too, why it is not mentioned in Regency historicals. What about American heroines in Regency England historicals? I like reading those stories about the British not thinking well of them, but wouldn’t there have been major tension and bitterness, due to the War of 1812.

Thanks for a great post that made me think. 🙂

Hi, Deb!
I have some ideas of why the War of 1812 isn’t featured more in Regency Romance but I’ll hold off until later in the day.

Glad I made you think!

By the way I’ll be away from the computer most of the day (gasp!) so I’ll respond to comments later tonight.

Have a great day everyone!

Great post Diane. Your question about books set in America during the War of 1812 is one that I have wondered about myself. Trends in Historical Romance today seem to be set primarily in England and the American West with maybe some American Victorian. One doesn’t see many books with American settings from the times periods between the Pre & Post Revolution through the Civil War. Not too many years ago (70s-80s), that’s all you could find.

That said, I do have 3 John Jakes books on my TBR shelves that are set in the American Civil War. Great titles like ‘On Secret Service’, ‘Charleston’ and ‘Savannah or a Gift for Mr. Lincoln’. I always enjoyed reading Mr. Jakes…I should really pull these books out and read them soon!

One also wonders what would have happened if Wellington had been sent to the US instead of Spain.

IIRC, he was actually offered the command in 1814 after Napoleon abdicated the first time, but turned it down.

And my husband and I actually had that conversation recently on the way to a Mariners game. (What can I say? We’re both history geeks and fond of playing “what if?”)

My remark: If Wellington had taken that command, we’d all be going to cricket matches now.

The War of 1812 is often overlooked in every way possible. This is ashame; I love learning about it. I’d like to see more historical fiction set during it.

There’s a renactment of the Battle of Bladensburg on Saturday August 14 at Riversdale House Museum. I’ll be blogging next month about the event and have some special guests including Rosalie Calvert, mistress of Riversdale.

I am certain many still had split loyalties. It would have been hard not to with family still in England and the country still being so young.

I hadn’t really thought about Regencies not taking place in America. An American is occasionally dragged in as a character, but that is all. I think in part this is because Regencies are about a society and its structure. Regency England was very strict about its social structure and everyone had their “place.” Your relationships with those of your social class as well as those who were not, were carried on within guidelines. Going against them had personal and social consequences.
America on the other hand was a more open society with less of a class structure. Much of Regency fiction is based on class and its dictates. An American setting would not work because it wasn’t as strict and the consequences as dire.
There are many good stories to be told about the War of 1812. Our part of the country, Lake Champlain, NY & VT, played a big role in the War of 1812. I guess Napoleon is such such a strong focal point, most authors forget to look any further.

IIRC, Carla Kelly has a book set during the War of 1812 (I think it was “Miss Whittier Makes a List”). Diana Norman’s “Taking Lberties” is set during the American Revolution, but one of the reasons I love it is that it truly gives the feeling of not knowing how this war would turn out. During Regency-set historicals, the existence of America is a given, but its existence was a very fragile thing for a number of years. I give credit to an author who can put me in that time and place and make me feel how confusing, scary, and potentially liberating it must have felt to those who lived through it.

Think of how long it took for news to come from France, and how long it took to come from America. The war of 1812 was so far away, whereas France was right across the channel, not to mention the fact that England and France had been fighting and making up, like an old married couple, for hundreds of years. America was a disobedient puppy in comparison. As you mentioned in your post, it wasn’t until then that England finally accepted us as truly our own sovereignty. France was the greater threat. I also agree with librarypat that Regency was much more about social structure uniquely English than a time period.

Janet, I would love to go to that Riversdale House Museum reenactment!

Karen, I agree totally that historicals have changed and that when once there were many American set historicals, especially ones set in the Civil War or shortly after. Now it is not easy to find Westerns-although Harlequin Historicals still publish them!

Susanna, I didn’t know Wellington was offered the command in 1814! I’ll bet we would be playing cricket and soccer would be football!

Christy, there was just a History Channel show on The War of 1812. I loved it.

librarypat, I suppose if the book took place in America, it wouldn’t be a Regency….but I could see some interesting plot ideas about soldiers invading Washington DC.

Susan/DC, I should have known Carla Kelly tackled the subject! I, too, am intrigued by the idea that the people didn’t know our country would succeed.

Judy, I think your ideas of distance and history are good points! I love the image of England and France being like an old married couple! And the US as an insolent puppy.

Okay now some of my ideas about why Regencies don’t deal with the War of 1812.

How do you pick the good guys and the bad guys? It is so much easier for me to see France as the enemy than my own country. Or to see Great Britain as the enemy, because that’s the society I love to write about.

Librarypat’s idea about Regencies being about class and social structure is a good point. Although putting an American in the mix makes for good conflict.

How would you settle the ending? If your hero was American and your heroine English, where would they live for the happy ending? It would not satisfy me if they lived in America, but it wouldn’t sit right with me for an American to embrace the English Regency society.

I just don’t think it would be a Regency if it took place in America (although it could start there…)and an American in Regency England isn’t my fantasy, exactly.

But if Carla Kelly could do it, it can be done!

Diane, my opinion on the matter is very similar to yours!

And though the great Ms. Kelly can do anything she wants, I do recall feeling some of those difficult feelings when reading her book. (For example, the hero thinks impressing Americans is just fine, which rankles.)

Another author who had a War of 1812 book was Zabrina Faire with “Pretty Kitty” (a long time ago, of course!)

And once upon a time there was a whole line of American-ish Regencies…. I read very few of them, though, so I can’t say if the War of 1812 was behind most of them or not!

Here’s the elephant in the federal era drawing room: your American characters would probably be slave owners.

Cara, just what you said, much more coherently than me!!!

Janet, OMIGOSH, I didn’t think of that. Slave owners….just can’t imagine it as being a part of a hero or heroine’s life.

It certainly wasn’t the norm for New Englanders to own slaves during the early 19th century! So that would be no problem. Just have your characters from Massachusetts. 🙂