Seems like I’m behind in everything these days.  Le Sigh.

This month, I am a traveling girl. Indeed, this very weekend I will be in Denver Colorado attending the RomCon conference. I do believe there are other Risky girls attending the conference. Amanda, for example. (Anyone else?)

I will have limited copies of my books available at the signing so if you’re going to be there, come by and say hello so I don’t feel like a doofus. I’ll be at the Anti-Heroes panel on Friday afternoon since I am the moderator (proudly adjusts shirt). Other than that, I do believe I will be trolling the halls looking for my favorite authors. Any reader who wants to say hi, totally should.

If you’re wondering if I’m prepared for travel, the answer would be no. I have my airfare all squared away, I’m not THAT bad, but other than that, I leave Thursday evening and will probably pack Thursday afternoon. Here’s hoping I have appropriate clothes!

Later on this July, of course, there’s the RWA National conference, but more about that as the date draws nearer. 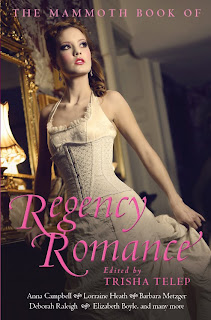 I have a story in the Mammoth Book of Regency Romance, which is out later this month and will be available from places like Amazon etc. There are loads of great authors in the book, so if you’re a fan of the Regency, this might be a tome to check out. Sometime in August, my story will be available for download with some fairly awesome artwork, so you will just have to check back for further details.

Carolyn Does Literary Sleight of Hand

Watch me take this cover (below) and relate it to the Regency. Ready? 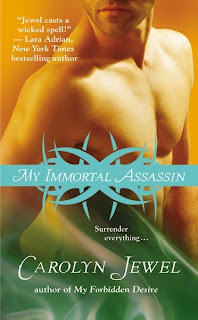 How, you must be asking yourself, is the cover of my January 2011 paranormal My Immortal Assassin, in anyway related to the Regency? Is it a time travel?  (No.)  Are there flashbacks? (No.) Does anyone wear an an Empire gown or an immaculate cravat?  (No and no.) Then what!?

As I wrote this story, the constant idea in the back of my head was that my hero, the assassin of the title, was, at heart, a Regency Rake. He’s a totally modern demon sort of fellow, but he’s has these old fashioned tics that come out sometimes in the way he speaks and the way in which he is, every now and then, completely flummoxed by the modern American woman.

Meanwhile back at the Ranch

Aloha, Carolyn! I’ll see you and Amanda at RomCon (as soon as I drop my children off at Camp Grandma in Ohio). I just printed the agenda – too many fun panels to choose just one per hour! But we will rock!

I am certainly not like you in packing. I have been planning for a trip to Wales in October 2010 since January 2002. Can anyone tell I’m an event planner for a living? I also plan out my outfits along with shoes in advance when I take a trip. I know I’m not spontaneous at all, but somethings a girl just has to plan.

Kim, hopefully we’ll get to see each other and say hi!

Jane: Seriously? I am so jealous. Of the trip and your planning abilities.

And wow, that is an awesome list. Nice to see Radcliffe getting some major props.

I studied abroad in Wales in 2002 and found out the Ryder Cup would be there in 2010. I asked my dad if he would take me and he said yes because he knew you had to win a lottery to get tickets and didn’t think we would. But we did and now I get a parent paid trip to Wales. So I’m excited. And I wouldn’t be too jealous about the planning skills. Sometimes they get in the way of fun.

Your Assassin book sounds great! Reminds me of Christine Feehan’s group of heroes. They all have that old world way of doing things. Love it!

Carolyn, sorry I won’t be there at RomCon, and, Jane Austen, I’ll have to skip Wales. I think I’ll use my $8,800 for The Mysteries of Udolpho…..(just joking, unfortunately)
I hope you all have a wonderful time!!!
Love your connection of The Immortal Assasin to the Regency. I can so see how that would work! Great covers, by the way!!!

What a great cover, Carolyn! I feel like I’ve been waiting for this book FOREVER. 🙂

See you in a couple of days!