Have you ever held a yard sale in order to fund a home repair project? Well, that’s precisely what Earl Spencer, brother of Princess Diana, did when he needed ten million pounds to repair the roof at Althorp and fund other home repair projects. Rather than use his driveway and front yard, Earl Spencer used the famous Christies auction house to auction off paintings, furniture, carriages, livery, uniforms, walking sticks, canes, snuff boxes, spoons, linens, porcelain, inkstands, and more.

See all the items here.
Read more about it here.

Too bad the auction is over, because I would have selected these items for myself: 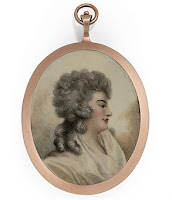 I’m partial to prints and artwork and would not have been able to resist a miniature of Georgiana, the Duchess of Devonshire (1757-1806). Georgiana died before the Regency, but she was a super star of her day, a fashion icon and a political hostess as well as a lady who personified some of the excesses of the Georgian era. 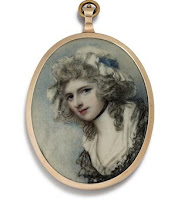 This is Lady Anne Horatia Seymour, wife of Lord Hugh Seymour, one of the Prince Regent’s set, and good friend of Mrs. Fitzherbert. Isn’t she pretty? 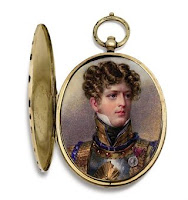 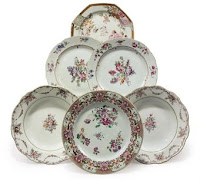 I also love antique porcelain and I thought these Chinese Famille Rose plates (1736-95) were particularly beautiful. 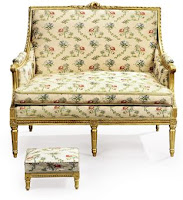 I also could not resist this lovely piece of furniture which the auction house called a “Louis XVI Giltwood Canape.”

There were so many treasures at the auction that it would have been hard to limit myself. As it was, I “spent” about ten thousand pounds. And I noticed that most of what I coveted was Georgian, not Regency. I suppose my Regency world is furnished with Georgian decor.

Did you ever buy a treasure at an auction or a yard sale? When I was at college I bought a desk and a vacuum cleaner worth every bit of the ten dollars I spent!

Which of Earl Spencer’s treasures would you have purchased?

Come visit me on Thursday for Diane’s Blog and next Sunday here at Risky Regencies when my friend Mary Blayney will talk about her latest, Courtesan’s Kiss.

I’ve never bought a treasure but two Syracuse alumni managed to find a copy of the famous Gainsborough portrait of the Duchess at a yard sale which they restored and is now part of the romantics collection in the UK.

I would have bought those plates, but there were no signs about the sale so I missed it.

I’m utterly clueless about bargains. I’ve watched Antique Roadshow and know more surely that I best stick with my inexpensive collections that aren’t worth more than my sentimental value.

If I could choose one thing, it would have been the set of eighteen Chelsea plates.

Oh, my, Elizabeth! That was a treasure!!

Carolyn, too bad we both missed the sale. We could have bid against each other for the plates!

Judy, the Antiques Roadshow is coming here soon and my sisters and I each put in for tickets, which are given away by lottery. We didn’t win any tickets so I guess I don’t have to pick any of my “treasures” to go to the Roadshow. Maybe that’s a good thing.

Pity, it would have been fun to see you. 🙂

My first piano (which still resides at my Mom’s house) was bought at an estate sale when we lived in England. My mother paid the incredible sum of 10 shillings (about $1.20) for a piano built in the late 18th century with real ivory keys and a plush silk ruched frontpiece. It is the piano on which I practiced for hours on end before facing my very starchy British piano teacher once a week. It really is a gorgeous piece and we have been offered some rather large sums for it. However, it has become a family heirloom to the point I will have to choose which of my nephews or my niece gets it once I have moved on.

She also bought some lovely little leather bound Shakespeare volumes that are sitting on a shelf across my desk at this very moment. They were given as gifts on different occasions to a young lady starting in 1898. They came in a box of books sold as a lot at the same estate sale for 1 pound (about $2.40 then)

Oh and my pride and joy are my pair of carriage foot warmers bought at another estate sale. My Mom bought them because they were unusual. We had no idea what they were until I began researching the Regency period for my novels. They are heavy gray stoneware sort of jars sealed on both ends but with a cork that screws in at the middle. One side is flat. Apparently that is where you rested your foot while it was warmed by the hot water you had put into the warmer at every coaching inn. They are perched on my hearth at the moment.

My Mom is the yard sale queen. She would have adored shopping at Lord Spencer’s sale! Until she got the bill!

Louisa, so far you win the prize. Or rather your mother wins the prize! I can’t believe anyone would have to sell a piano for such a pittance!

Oooh, I liked the blue and gold doors!

I’m gearing up for a garage sale in August. Do I hear a bid on this chewed-on wicker chair?

I know, O Divine One. When my Dad got home and Mom told him she bought a piano I thought he was going to keel over. Then when he saw it and realized how old it was he just knew she had spent a fortune on it. When she showed him the bill of sale he was speechless. They shipped it to the States and my Mom made sure I was not at home when they moved it into the house because I drove the movers mad when they put it in the truck in England. One of the reasons it is still at Mom’s is that my brothers refuse to move it for fear of dropping it!

They funny thing is that we had those foot warmers for 40 years before we knew what they were!

We have purchased many treasures at auction and at yard sales. We started buying old furniture that way because it was a cheap way to get good solid furniture and in the 70’s still rather cheap. We got our bedroom set, a carved oak Eastlake bed and dresser with beveled mirror in mint condition, for $80. I paid $3 for a stack of shoe boxes once and it was a button collection, some loose and some sorted by type and on cards. Most of our house is furnished with antiques that we purchased or were family items.
It is always so much fun because you never know what you will find or how much it will go for.

In this sale, there was an Irish clock I would like to see in my living room.

librarypat, I would love to furnish my house that way!

I could only get the first page to work but I loved the clock. I use to exclusively look just for books at yard sales lol. I’m a bit of a hoarder so I was better off not doing too much looking.

Hey I found this idea very interesting that you sell your homes’ accessories for the sake of maintaining your home. well it may be an idea to for maintaining or preserving the more valuable items.