Visit to England, Part I 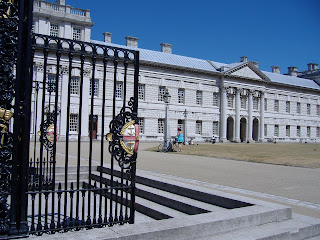 I’m returning home today after a wonderful week in England, and I want to show you some pictures of where I’ve been.

I’ve enjoyed reading about Amanda and Carolyn’s conference experience, but I think I can safely say that the conference I attended last weekend, the RNA Conference in Greenwich, London, had the best conference location ever! The weather was hot and sunny (I found it refreshing after the hot mugginess of Washington, DC) but the nights were awful. We stayed in student accommodation where the windows would only crack open and we would compare notes in the morning on how we kept cool. My technique? Have a cool shower and sleep on the wet towel.

We had a celebratory dinner in the Trafalgar Inn, which Dickens attended for whitebait suppers, and about which he wrote in My Mutual Friend. 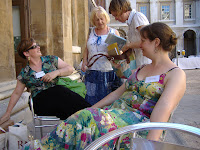 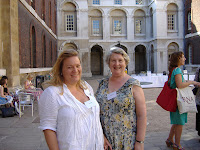 I met some lovely people at the conference. Here’s Susannah Kearsley signing, and me with Lucy Inglis who writes the amazing Georgian London blog. 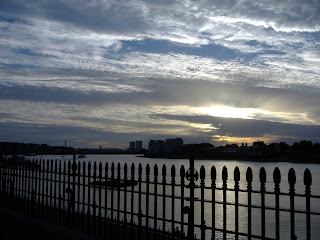 Here’s the Thames in the evening. I spent most of the time in Greenwich but went to the London Museum where I saw, among other wonderful things, the front door of Newgate Prison and a fantastic recreation of Vauxhall Pleasure Gardens. 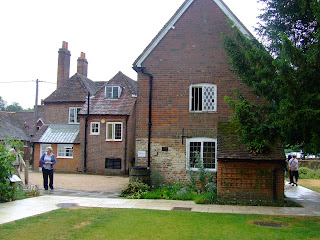 After the conference I traveled to Hampshire where I stayed with friends who happily took me to Chawton where we visited both Chawton Museum, Jane Austen’s home, and Chawton House, a gorgeous Elizabethan-Jacobean mansion which is now a library of women’s literature from the sixteenth to nineteenth century. Sadly we couldn’t take pictures inside.

Chawton House was one of the properties owned by Jane’s brother Edward, who was adopted by the Knight family and inherited their estate. He lived in Godmersham, Kent, but provided his mother and sisters with the permanent home of the cottage in the village. 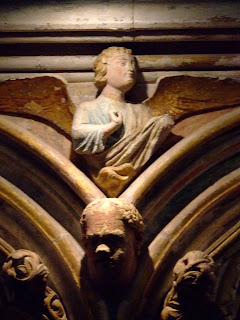 We also went to Winchester Cathedral where Jane Austen is buried, and the magnificent Salisbury Cathedral. Here’s a 13th century carving from Salisbury that depicts an African man, almost certainly a cathedral workers\ who was immortalized by his colleagues. Who was he? How did he end up in Salisbury?

I’m also blogging today at Supernatural Underground and showing off more of my photos.

Thanks, Janet, for sharing your London experience! RomCon was fun … but not beats merry ole England!

How was your panel discussion about writing for American markets?

Omigosh, Janet! What a lovely post. I’m envious of everything except the nights sleeping on a wet towel….

I MUST see that Vauxhall Gardens exhibit at the London Museum. Vauxhall is one of those Georgian/Regency places that fascinate me.

I am so glad you had such a great trip.

What a lovely trip! Thanks for sharing it with us, Janet. Sleeping on a wet towel? Now that IS hot! How I envy your pilgrimage to Chawton. I’ll make it there one day. Sounds like it was a fabulous conference!

Janet – Did you like the Vauxhall Exhibit at the Museum of London? I was expecting more. I don’t know what, exactly, but . . . . more.

Wow that carving in Salisbury is quite intriguing! Thanks for sharing your journey and pics.

I love the photos, Janet!

Greenwich is so lovely…though I don’t envy you the overnight heat!