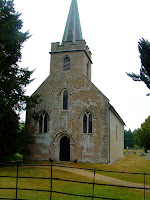 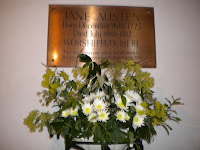 Last week I gave a quick overview of my visit to England and today I wanted to talk a little more about the visit to Chawton, where Jane Austen made her home for nine years, polished and wrote her novels, and hung out with vampires (next book!). Naturally I haven’t finished unpacking yet and some of the stuff will get tossed into the bigger suitcase for Nationals, for which I really didn’t buy any more clothes. Sorry. I leave all that to Amanda. 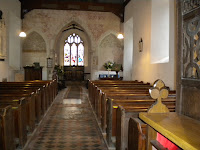 Before visiting Chawton, we went to St. Nicholas Church in Steventon, which is where Jane Austen’s father was vicar, a living taken over by one of Jane’s brothers. The house where they lived no longer exists, but the church still stands, a tiny, charming building.

Austen enthusiasts from all over the world have visited and contributed money to restore the church. 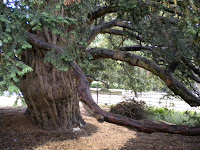 Outside the church door is a venerable yew tree nine centuries old, where once the church key was hidden.

From there we went to Chawton, a place I hadn’t visited in about fifteen years so I was thrilled to see the changes there. The working areas of the house have been restored–the seventeenth century house was once a farm, so it has substantial outbuildings as well as a lovely garden. 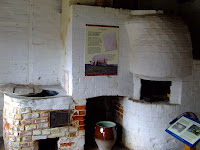 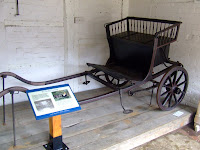 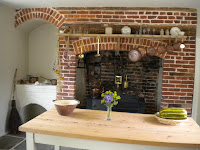 The kitchen has been fitted out with a range which is early Victorian but not period, and to the left of it is a Rumsford stove, probably original. The bricks above the fire had holes into which pots could be lowered or placed above. (If you’re going to attend my presentation on servants at the Beau Monde Conference next week you’ll see these pictures again!) 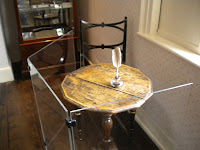 I was struck by how tiny and crooked the rooms in the house were–probably less crooked two centuries ago! Very little family furniture remains, although there is a desk and two chairs in the parlor which came from Steventon. And of course the most famous writing table in the world is there too. 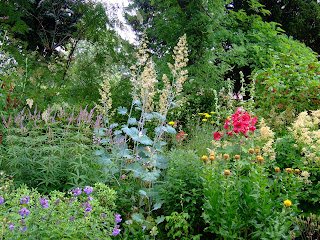 It had been very hot the previous week and the weather had only just broken, so the garden possibly isn’t as lush and green as it should have been, but I thought it was gorgeous.

And here’s the last picture, the new cover for Jane and the Damned. When they told me it was going to be pink, I wasn’t very happy. I’m not a pink sort of girl and Jane Austen, as I depict her, wasn’t either. But I love it! Grubby pink works so well. What do you think?

Have you visited Chawton? What did you enjoy seeing there?

Ooh, those pictures are just lovely!

I would love to visit Chawton. How awesome (in the real sense of that word)it would be.

Jane and the Damned. I LOVE THE COVER. It is so clever. The fang is inspired!
This book should get more attention than Pride & Prejudice and Zombies. I’m sure it will be way better!

Gorgeous pics!!! These are definitely on my “must-see” places next time I get to England, but in the meantime thanks for the vicarious visit 🙂

Thank you so much for taking us along on your journey. Chawton is definitely on my bucket list! The garden is lovely!

And I happen to think that cover is quite striking!

If I ever get to England, I will certainly make the trip to Chawton. I can see it now, my poor husband will be dragged all over the country searching out and visiting sites of literary importance. Would make for a great trip.

Oh my, that yew is magnificent!!!
Thanks for sharing your pics, they really give a sense of time and place and a feel for Jane’s life. I can imagine her sitting in the family pew, staring distractedly at that window and thinking thoughts precisely of her own choosing.