I’m thrilled to welcome Ann Wass as our guest today. Ann is historian at Riversdale House Museum, MD, which hosts a battle reenactment of the Battle of Bladensburg on August 14 and other events throughout the year. Ann is author of Part 1 (the Federal era, 1786-1820), of the book, Clothing through American History: The Federal Era through Antebellum, 1786-1860. More here about the book.

As my specialty is dress in the United States, I have explored how American women kept up with the Regency fashions of their English sisters and the Empire fashions of their French ones. In Charleston, women “copied from the fashions of London and Paris” (Ramsay 1809, 409). In New York, women seemed “more partial to the light, various, and dashing drapery, of the Parisian belles, than to the elegant and becoming attire of our London beauties, who improve upon the French fashions” (Lambert 1810, 2:196-97).

By the late 1790s, French women wore slender, high-waisted dresses made of lightweight, clinging cotton muslins. Englishwomen generally modified the look, and most Americans did, too; emigrée Rosalie Calvert wrote, “In this more virtuous land only the contours are perceived through filmy batiste–a subtler fashion” (Callcott 1991, 34; even in France not everyone went to extremes. Maria Edgeworth wrote from Paris, “people need not go naked here unless they chuse it” [Colvin 1979, 27]). One American, though, enthusiastically adopted French fashions and became the talk of the town. In 1803, Betsy Patterson of Baltimore married Jerome Bonaparte, Napoleon’s younger brother. Jerome presented Betsy with gowns from France, and in Washington, DC, Margaret Bayard Smith saw “mobs of boys crowded round her splendid equipage to see what I hope will not often be seen in this country, an almost naked woman” (Smith 1906/1965, 46-47).

How did women learn about the latest fashions from abroad? Some, like Mrs. Bonaparte, received gowns from Europe, while others went shopping there themselves. Elizabeth Monroe and Sarah Bowdoin, both married to diplomats, shopped in Paris and London. Dolley Madison commissioned Ruth Barlow, wife of the minister to France, to send her “large Headdresses a few Flowers, Feathers, gloves & stockings (Black & White) or any other pritty thing” (Shulman 2007). 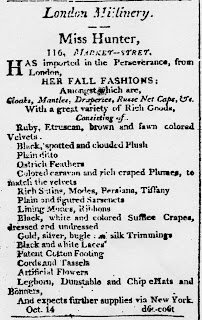 Ladies also bought imported goods in American shops. In 1805, New York merchant Joseph Kaumann advertised “3 trunks ladies Hats and Bonnets/1 do. ready made Gowns” from Nantes, one of France’s leading seaports. In 1807, the French milliner Mme. Bouchard “just received from Paris, the newest fashions, more elegant than have yet been seen in this city.” Her English rival, Mrs. Toole, also received “a very handsome assortment” including bonnets, shawls, veils, and ribbons from Paris (though she was English, she no doubt knew her clientele would admire the latest Parisian fashions.)

Other merchants sold English goods. In 1805, Baltimore milliner Miss Hunter imported fall fashions from London. Even in the midst of the War of 1812, while there were major disruptions in trade, Mrs. Gouges in Baltimore sold fashions from both England (the enemy!) and France. It may have been Mrs. Gouges that Betsy Bonaparte had in mind when she wrote Dolley Madison in 1813, “There are in the Shops in Baltimore French Gloves Fashions &c: & the little taste possessed by me shall be exerted, in 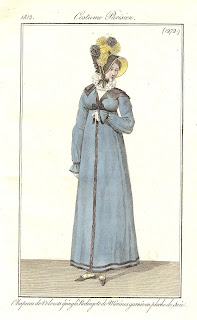 Selecting, if I obtain your permission, whatever you may require.” Mrs. Madison replied, “I will avail myself of your taste, in case you meet with anything eligant, in the form of a Turban, or even anything brilliant to make me. . . .” (Shulman 2007).

American women also studied European fashion plates for ideas to make their own clothes. These hand colored engravings struck from steel plates were published in English and French periodicals. Rosalie Calvert asked her sister in Antwerp for several of “those little engraved sketches showing morning and evening dress. . . with them we will be able to copy your styles.” (Callcott 1991, 347). New Yorker David Longworth subscribed to the English Gallery of Fashion and exhibited the plates to fashion-hungry women for a small fee (Majer 1989, 220). Josephine DuPont sent Margaret Manigault plates from Paris in 1799, and Margaret thanked her friend for the “curious, & entertaining, & astonishing, & very acceptable Costumes Parisiens” (Low 1974, 51). In 1814, Margaret’s daughter received “a fine collection of ‘Belle Assemblies”’ from Mrs. Dashkov, wife of the Russian minister to the United States (Manigualt 1976, 23). La Belle Assemblée, despite its French name, was published in England and was difficult to obtain during the war years. 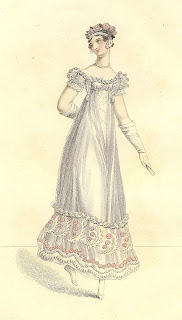 Once the war was over, American women again had ready access to European fashions. In Philadelphia, Mary Bagot, wife of the British minister, found, “every sort & kind of French, Indian & English goods to be had-excellent of their kind & not dear” (Hosford 1984, 43). Even out west, women kept up appearances. A Scotsman observed, “I have seen some elegant ladies by the way. Indeed, I have often seen among the inhabitants of the log-houses of America, females with dresses composed of the muslins of Britain, the silks of India, and the crapes of China” (Flint 1822/1970, 286).

Low, Betty-Bright P. 1974. Of Muslins and Merveilleuses: Excerpts from the Letters of Josephine du Pont and Margaret Manigault. Winterthur Portfolio 9: 29-75.

Ann, great to have you here today. I’m fascinated by the idea that ready made gowns were available. Were these for sale or did they exist as samples of what could be produced?

Welcome, Ann! Thanks so much for visiting Risky Regencies.

I am heartened by how women have not changed much. We wished to be fashionable then as now!

Janet, Ready-made gowns do seem to have been available in England and France, as there are ads reporting the importation of them. The Baltimore merchant, Mrs. Gouges, for instance, said she imported two cases of lace dresses, so the dresses themselves must have been available for sale. As far as I know, though, no one has done much research on ready-to-wear this early, so I don’t know how sizing was handled.

Ann, possibly the ready to wear gowns were made like opera costumes, which travel with productions and therefore have to be made to fit a wide (and I do mean wide) variety of sizes. So they might include tucks which could either be expanded or slashed out and extra long hems.

Janet, I do wonder if you’re right about the ready made gowns being like opera gowns. I know when I did some theatre costumes in college we always made them bigger than they needed to be so we could use them over and over again by taking them in or out.

Ann, fascinating post. I’ve always loved fashion or at least historical fiction and I loved the references to Dolly Madison. I think she was an amazing woman and love to know more and more things about her.

Have you read Catherine Allgor’s book about Dolley Madison, “A Perfect Union”?

Fascinating, Ann! And I especially appreciate the bibliography. I LOVE research material. I have to agree with The Divine One, it is comforting to know that we have so much in common with our female ancestors.

Yes, Janet, those costumes do indeed have to be adjustable to fit a wide variety of singers in height and girth (for lack of a better term.) You definitely want to make friends with the company seamstresses or you could end up with a wardrobe malfunction accompanied by a 200 plus piece orchestra!

What a fascinating blog! Thank you so much for joining the Riskies today 🙂

I love the white ,French ball gown. Funny how many other things may be pushed aside or ignored, but for some women fashionable clothing is of the utmost importance.
Ann, thank you for an interesting post. I can remember being a bit shocked when I first read how some styles left the breasts fairly exposed. Interesting that in a time when letting your ankle show was not proper that your breast could be peaking out for all to see and nothing was thought of it. I love the French Empire style. Again, it is all what you do with it. Transparent fabric that left little to the imagination is just hard to imagine for a dress to be worn out for a ride or to tea. I wonder if the ankle showed?

Sometimes the ankle did show–especially in the later 1810s. And most English women, at least, probably wore layers of underpinnings–at the very least, a shift, stays, and petticoat. As Adlen O’Brien, another costume historian, observed, (several years ago) the women in the more extreme styles were the “J Lo’s” of their day. The most extremely dressed French women were called “merveilleuses,” you know, so even some of the French thought them remarkable.