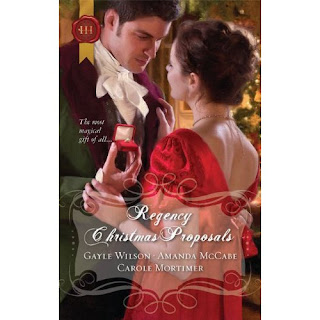 First of all–new covers!!! Regency Christmas Proposals–isn’t it pretty? Doesn’t it look wonderfully Christmas-y? (even though Christmas seems years away…). I’m very excited about my story Snowbound and Seduced (a Diamonds of Welbourne Manor spin-off! We met Mary Derrington and her girlhood sweetheart Dominic, Viscount Amesby, in Charlotte and the Wicked Lord. Now they have to reunite to chase after her sister and his cousin as they attempt to elope in the midst of bad weather and right at Christmas), and the thought that someday it will be cool outside again (after weeks of 100+ weather here). It’s out in November, along with my new “Undone” story, To Court, Capture, and Conquer (I also just found out I’ll be doing an “Undone” story with a 1920s story–stay tuned!). November will be fun!

Until then, my yard is withering from lack of rain, my cats won’t come out from the cool shade under the bed, and I watch way too much summer TV. True Blood, Mad Men, Vampire Diaries re-runs, History Detectives, Pawn Stars, Project Runway, On the Road With Austin and Santino…you see what a useless summer I’m having. But I also take breaks from being a TV lump on the couch to work on my WIP (working title–Elizabethan Theater Story) and doing some research. One great book on the period is Charles Nicholl’s The Reckoning: The Murder of Christopher Marlowe, and I was struck by one little piece of info I found there:

“Peter Shakerley was one of those self-publicizing Elizabethan oddballs who found their way into the popular imagination. There were others: an absurdly dressy Italian called Monarcho, the loquacious barber Tom Tooley, old Mother Livers of Stoke Newington, and so on. They were a bit crazy, and people laughed at them and talked about them, and their names remain like curious fossils in the pamphlets and ballads of the day” 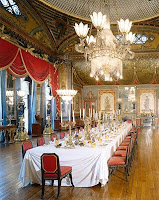 Maybe it’s my summer TV time, but it occurred to me–these were Elizabethan reality stars! Crazy, laughable, well-known for doing–well, nothing really, except being odd and good at publicizing their oddness. They’re like the Kardashians of the 16th century. Today they would appear on Go Fug Yourself (especially that Monarcho guy–I’d love to see his outfits) and on the cover of US Weekly with Bachelors and Bristol Palin. If only there was a Big Brother where groups of them would be locked up in Hampton Court, or maybe a Victorian Project Runway where Charles Frederick Worth could be the Tim Gunn figure (only meaner). A Regency Work of Art, only with whiny, back-stabbing poets! A Georgian Top Chef where they have to prepare a 30-course dinner at the Brighton Pavilion–in only two hours!

That would be TV gold, and I’ve spent too much time this morning dreaming up new schemes. Who Wants to Marry Henry VIII? Lady Caro Lamb is the New Bachelorette–Be Careful, She’ll Stab You With That Rose If You Reject Her?

So you tell me! What historical reality shows would you like to see???

Oh, I LOVE this, Amanda/Laurel! What a fabulous idea. I particularly like A Georgian Top Chef and Who Wants to Marry Henry VIII. I think Henry might be very in demand, actually. Henry VIII’s Wife Swap? In the UK we have a show called Come Dine with Me so how about Come Dine with the Borgias? Or Restoration Supernanny sorting out Charles II’s many offspring?

I can see I’m going to be spending the afternoon dreaming up new shows… I’m hooked on this!

What a cool blog, Ammanda!!

How about a Regency Project Runway with different modistes competing. The winner gets to make a gown for the queen.

Similarly the Top Chef winner gets to make a royal meal.

How about a Haut Ton Survivor version where you have to attend a series of balls at homes of the highest sticklers and Almack’s every Wednesday for a whole season.

The Victorian version of …. I Didn’t Know I Was Pregnant…

(really I didn’t…I mean there was just that one time, but that isn’t how babies are made, is it??..well, maybe it wasn’t just one time. Maybe his sheepgut sheath didn’t work. He said it would)

a fun blog how about the royal regencies has talent.

“The Victorian version of …. I Didn’t Know I Was Pregnant”

These all sound like fabulous shows, and sadly ones I would actually sit and watch. “Dancing With the Stars” could work in many periods as well (I can just see Len critiquing a Volta or a nice quadrille). Nicola, I especially like “Restoration Super Nanny”

The Real Housewives of Regency Mayfair!! Who is secretly sleeping with the footman? Who can out shop whom? Catty, Catty, Catty fights.

The Real Housewives of Regency Mayfair…I love it!

forgot to say that your Christmas cover is to DIE for!!! Gorgeous.

Sad to say, except for The Amazing Race, I don’t watch reality TV. I guess you could send couples on a trip or two – TRAMPING THROUGH TUDOR ENGLAND or something.