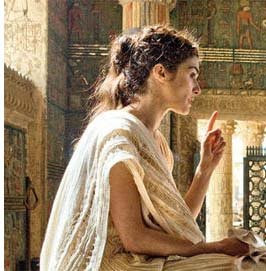 As we do every summer, my son and I are in Minnesota for two weeks visiting relatives and he’s doing sailing school (I almost wrote ‘saline’ school, which would be quite a different thing entirely, wouldn’t it?).

We return home tomorrow, but this morning, my blond (natch!) aunt took me to the local Y for yoga. And introduced me to one of her yoga buddies, who is also an author. She asked me what I wrote, and I told her “historical romance.”
And she then followed up with what people usually ask (when they don’t pop the dreaded bodice ripper question), which is, “Oh, so I guess you’ve done a lot of research.”
“Nope,” I answered.
She proceeded to ask me about the period I wrote in, and I sketched out the details–the dates, why it was a fascinating period, that Queen V. arrived about 17 years later, and so on.
And I realized, as I was talking, that I had gotten so much of my history from romance books that I didn’t *need* to do too much research. I do, of course, as all of us do, because I love history and delving into books that described how people lived.
(Yes, a caveat: I have been wildly historically inaccurate in certain things I’ve written, things that could have been cleared up with research. But this is not, for once, about my failings, but about my triumphs).
It felt kinda cool to be an ‘expert’ on something, even in the few minutes before heading into the class for downward dog and stuff. I don’t usually think I know a lot about anything, except for books and music, so it was neat to talk authoritatively about a different subject.
And, meanwhile, I am writing a book set in Scotland during the Regency period, so I am doing some research on that, since neither Heyer nor Cartland covered the area in their writings.
Megan
0 0 votes
Article Rating
Subscribe
Login

Megan – I love research almost more than I love writing. You might want to check out Sir Walter Scott’s ‘Waverly’. It’s a romance. It’s Scottish. It was written in 1814!

Romance reading and research combined in one convenient package. 🙂

Thanks, Elyse! I will go find it.

Hey, Megan, what you can do is download the Kindle Ap to your iPad and then order Waverly from Amazon. You can get it free, or for 95 or 99 cents. Or even 2.99.

And then you can read it on the plane ride home!

I have learned more history from historical romances and historical fiction than I ever did in history class. I do research new ideas or “facts” that pop up to assure they are accurate. I don’t mind a little wiggle room in exact details, but I do like the books to be relatively accurate.
There was a blog I read recently, maybe here, about people preferring to read historical ROMANCE and not be bogged down with a lot of facts. Others wanted HISTORICAL romance with the correct information. I’m all for HISTORICAL ROMANCE with accurate details and a good romance story.

I discovered romance books in the Netherlands. Thereafter, I brought a book with me on the bus ride with the spouses’ club sponsored trips. At one point, my companion would say, “Put down the book and look at the history outside the bus.” But the historical romances prepared me for these trips!

Hubby and I have been to Scotland twice in the past 5 years (the only drawback to living in Hawaii is it is so far from the majestic Highlands). I do recommend Historic Scotland, http://www.historic-scotland.gov.uk/

It is a branch of the Scottish Government that cares for its historic properties, including Edinburgh and Sterling Castles. But my favorites are the crumbling castles scattered throughout the countryside – they tell more stories than the stately manors.

Hi Megan,
I live in historic Scotland, so I get to do all my research on my own doorstep. In addition to the Historic Scotland wesbite, you could try the Scottish Tourist Board one, http://www.vsitscotland.com, which has lots of inpspirational photos and great links to historic sites.
Marguerite Kaye

You know how much I love the research! 🙂 It’s one of my very favorite parts of writing historicals. But it was definitely romance novels (along with stuff like “The Secret Garden” and “Anne of Green Gables”) that got me hooked on history as a kid. Reading them made me interested enough to run to the library for non-fiction sources…

And I’m also about to start researching Scotland for a story (Mary Queen of Scots era). Maybe we need a trip to Scotland soon?? 🙂

Megan and Amanda, my friend’s husband is Scottish, from Edinburgh, so if you ever need any information, I’m sure Alasdair could help you out. And I love Scotland. I’ve only been to Edinburgh and the Trossachs but I’m dying to go to the Highlands and Glasgow.

‘WAverley’ is actually set during the 1745-46 Jacobite Rebellion (hence it’s subtitle – ‘WAverley – or ’tis Sixty Years since’). Scotland in the Regency – is it the Lowlands or highlands you’re interested in? Edinburgh is going through ‘The Enlightenment’ but the Highlands are almost changing more.

Wow, thanks for all the specific recommendations, guys! I am not sure where we are in Scotland–it’s at an isolated house, out in the country somewhere.
I might have to figure that out, huh? I will go poke around those books and sites you all recommended.