First of all–I have a new cover!!! I am soooo excited to be able to share this, the third in my “Daughters of Erin” series, Lady of Seduction. This is Caroline Blacknall’s story, and will be out in June 2011. I actually think this is my favorite of the three covers, I love the yellow and green colors and the book in her hand (which actually plays a part in the story…). In the meantime I am slowly pushing my Sisyphean way toward an October deadline and enjoying the cooler weather!

For today’s big news–September 7th marks the 477th birthday of Queen Elizabeth I. My WIP is set in Elizabethan England, and even though the Queen herself doesn’t make an appearance in the story her presence hangs over everything. Sometimes it feels like she hangs over my life, too, since I’m always reading research books concerning her time! 🙂 I’ve also been reading Kate Williams’s book Becoming Queen Victoria, about the lonely childhoods of Princesses Charlotte and Victoria, and between those two and Elizabeth and her half-sister Mary, it’s easy to see that growing up a princess isn’t all it’s cracked up to be.

Elizabeth Tudor was born between 3 and 4 o’clock in the afternoon at Greenwich Palace on September 7, 1533 to universal disappointment. Everyone had confidently expected a son. Astrologers assured King Henry that his new wife Anne’s baby was a boy (who would tell him otherwise?), and Henry himself felt it was Divine Will that Anne give him a prince. After all, he had turned the whole country upside down to marry Anne Boleyn, and she was actually crowned with St. Edward’s Crown (as no other queen consort was) at Westminster Abbey, she and her pregnant belly in full view of everyone. Then–out comes a squalling red-haired girl. But the birth was relatively easy and it was assumed the queen would soon be pregnant again. “A fine healthy girl this time, a lusty boy will be next.”

Elizabeth was named after both her grandmothers (Elizabeth of York and Elizabeth Howard Boleyn) and given a grand christening at the Church of the Observant Friars with 4 grand godparents (Archbishop Cranmer, the Marquess of Exeter, the Duchess of Norfolk, and the Marchioness of Dorset), and it is said she wore the gown in this photo, now displayed at Sudeley Castle. An eyewitness described the christening: …and the Childe was named Elizabeth, and after that all things were done at the Church doore, the Childe was brought to the font and christned and that was done, Garter chiefe King of Arms cried aloud “God of his infinit goodnesse send prosperous life and long to the high and mightie princesse of England Elizabeth.” She wore a mantle of purple velvet with a long traine furred with ermine and was given such gifts as “a standing cup of golde fretted with pearle,” “three gild boles pounsed, with a cover” and “three standing boles graven, all gilt, with a cover.” At the end they brought the Princeshe to the Queenes chamber doore…that the King thanked them heartily and commanded them to give thankes in his name, and from thence they were had to the seller and dranke, and so went to their barge.” 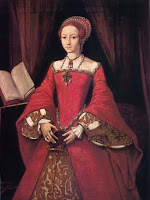 After this her childhood was much like any other royal child. She was given her own household at the age of 3 months at Hatfield House. She was given a governess, Lady Bryan, who she later called “Muggie,”a chaplain (Matthew Parker, who as Queen she made Archbishop of Canterbury), and her own dressmaker to make sure she was clothed as befitted a princess and the heiress presumptive to the throne. Her mother even made frequent visits to her nursery to coo over her. But one of her ladies-in-waiting was her unhappy half-sister Mary, displaced from her title of princess and separated from her mother Catherine of Aragon. Not surprisingly, she didn’t much like the new baby. 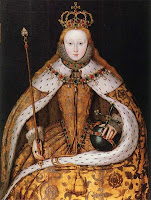 This glittering childhood didn’t last very long. Her mother suffered two miscarriages and fell from favor with her husband. On May 19, 1536 she was executed at the Tower and Henry married the first of Elizabeth’s many stepmother’s Jane Seymour, who soon gave him the desired prince before dying herself. Elizabeth wasn’t even 3 years old yet when she lost her mother and her secure position and was demoted from Princess to mere Lady. Lady Bryan had to write begging letters for money to buy the little girl clothes when she outgrew her old ones, declaring Elizabeth “hath neither gown, nor kirtle nor petticoat.” As the years went on, her fortunes rose and fell generally depending on her stepmother. She got a new governess, Kat Ashley, who would stay with her until Kat’s death, and tutors who encouraged her great intelligence and love of learning. Until her coronation at the age of 25, it was an uncertain, dangerous, and not very prosperous life, but her reign proved that her father’s immense striving for a son, and the lives he wrecked in the quest, was one of the great ironies of history. He already had an unsurpassable heir–it just happened to be a woman. I find her resilience and self-confidence in the face of danger and obstacles very inspiring.

Who do you find inspiring? Whose royal christening (or wedding, which of course Elizabeth never had!) would you have liked to attend??

Great post! I would be curious if Queen Elizabeth II celebrated the Virgin Queen’s birthday today!

I watched four seasons of The Tudors on Showtime. I thought the best was Season Two where Anne Boleyn shined as she pressed Henry to consider Protestant reform both in faith and charity. Since the series was inaccurate at times, it remains uncertain if Anne was truly dedicated to the cause but the actress, Natalie Dormer, was fabulous!

I am sorry that the producers decided not to continue with the remaining Tudors – Prince Edward, Bloody Mary, and the Virgin Queen! Indeed, the irony of King Henry’s daughter (not son) surpassing his legacy is one of history’s greatest twists!

Sublimally I must have known about the upcoming anniversary. 🙂 (See package.)

Your new cover is fabulous, too. GCP has been doing great covers for you!! This one I’d say is the Riskiest for taking such mild colors and creating such a great composition out of it.

I, too, love the new cover! I think it will stand out for its different use of color.

I would have liked to be present for the christening of Prinny’s Princess Charlotte. Think of the characters who would have been there!

Fantastic cover Amanda! I think I would have liked to have attended either Prince William’s christening or the Old Pretender James III’s christening. Just finished reading Carolly Erickson’s RIVAL TO THE QUEEN about Lettice Knolly’s just in time for Elizabeth’s birthday. My review is up at Scandalous Women.

Lots of information that I find fascinating about that time. I would like to have seen Princess Diana’s wedding in person although TV coverage was pretty good. I wonder if any of the royals are ever happy – as they say, money isn’t everything (but it pays the bills)lol.

My current WIP is an Elizabethan, though not a romance, and features Elizabeth as a POV character. So, as you can imagine, I’ve been heavily steeped in research over the past few months too.

Not sure which royal wedding or christening I would like to have attended. But I wish I could have been a fly on the wall during certain moments of intimacy between Elizabeth and Dudley. Well, maybe not a fly. But it would certainly make my life easier as a novelist to be sure what, if anything, those two got up to. 😉

Elizabeth I was one of the most amazing women in history. I have always been a big fan. She was her father’s daughter and more than that she was her own person. I find every aspect of her life fascinating.

I would love to have attended Queen Victoria’s coronation as I truly believe the players at that point in her life would put Machiavelli to shame.

“Becoming Queen Victoria” describes the christenings of both Charlotte and Victoria as small, quiet affairs because George IV didn’t want to be overshadowed! 🙂 Sounds like the story of his life…

I would have loved to see Elizabeth I’s coronation or Victoria’s wedding! Or any royal ceremony, really