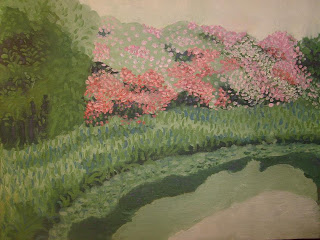 I was looking through our craft bins for materials for a kid’s costume and ran across this oil painting I began over 15 years ago. It was while my husband and I were living in England. A friend of his visited and they planned a day of doing Manly Things (some sporting event or other), so I spent a blissful day working on this. (BTW the painting was inspired by a visit to Exbury Gardens, famous for its azaleas and rhododendrons.) But soon after, work got busy and I pretty much forgot about the painting, though somehow it managed to make it back across the Atlantic with us.

Now that I’m looking at it from a distance, it seems not half bad for a first attempt. Yet I don’t know about completing it. I don’t know if I could match the colors again. I kind of like it as it is; maybe I should just varnish it (to bring back the brilliance of the original colors) and frame it. Or maybe it should go back in the craft bin.

I am starting to work on writing again, and feeling the same ambivalence toward the works-in-progress I haven’t touched in the year and a half since my husband’s stroke. Around the time of the demise of the Signet Regency line, I was confused and getting contradictory advice from industry professionals as to what I should work on next, with the result that I have three works in varying stages of completion:

– My balloonist story (about half a close-to-final-draft, the rest rough)
– A Regency makeover story (three chapters)
– Another story (outline only) I’m not ready to talk about but which may be the most marketable of the three.

I also have an Idea File with a bunch of less-developed story kernels. 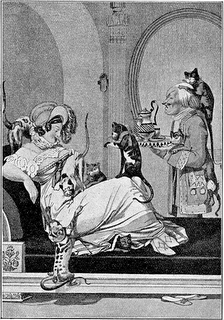 I just don’t know where to start. Although I have missed the writing so much it hurts, I’m feeling like someone reunited with a long-lost lover and suddenly not knowing what to say.

What do you think I should do? Revive one of these unfinished works? Start something new? Noodle around with multiple stories until a winner emerges?

All advice warmly welcomed, even though I don’t promise to follow it!

P.S. Don’t forget to visit tomorrow when we host Liz Carlyle on her charity blogtour. She will give away a signed copy of her latest ONE TOUCH OF SCANDAL and Harper Collins will donate up to $3,000 ($1 per person per post on the entire blogtour) to Liz’s favorite cat rescue charity, Cat Angels.

So good to see you, Elena. My first thought when I saw the painting was “Impressionist!” Sometimes the most important thing in art is to know when to stop. But don’t put it away. It’s brought back so many wonderful memories.

As to what to write, since you’re only stepping back in, write what you WANT to write. Allow yourself to embrace what you love on your terms to start. You can always make compromises and adjustments later. The important thing is to rediscover that love. It may take you in a completely different direction. You’re different now. Let yourself remember why you love to write or it won’t matter what the industry wants because it won’t capture your heart.

I LOVE a good makeover story, so based on that alone, I would selfishly tell you to write that one.

But there’s no point in writing something you’re not going to love. If you feel MEH about that idea, write something else.

Try just jumping into something. Anything, actually. Write a short piece just to get yourself back into the rhythm of writing. Reach out to your writing friends and/or lurk on some lists. If you can, go to a local conference to soak up the energy and hang with other writers.

And what about this: Buy the RWA conference CD from this year’s Nationals and listen to some (or all) of the workshops, chats and keynotes. That might be a way to get yourself back in the writing frame of mind. My conference CD arrived and I’ve been listening to it at work and in the car. As ever, some workshops are better (for me) than others, but some get me really excited about writing.

Noodle about until something sparks. Something WILL catch fire and you’ll be in love all over again. At least that’s how it works for me. I simply can’t write something I feel “meh” about.

I’m hoping the balloonist story is what does it. Cause I wana read that one!

Elena, I think Judy, Carolyn, and Isobel’s advice is the best.

I, too, think you should write whatever indulges your love of writing. Don’t worry about marketablility at this point. Write a book of your heart or just something that gives you joy.

If you want to write something short, you can always consider a Harlequin Historical Undone. It has to be sexy but it is a great way to break back in.

But only do it if you can have great fun writing it. After what you’ve been through you need to have fun.

I agree with what everyone has said thus far! We can’t tell you what to work on: your gut already knows.

It’s whatever makes you passionate and excited to sit down and write. That’s the best project and I honestly have to believe that it will be easier to market than any “marketable” idea.

Thanks for the advice, everyone!