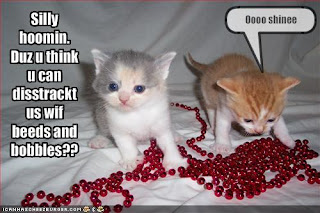 I am now on the downhill slide to writing The End on the WIP (two of the sweetest words in the writing world!), so my brain power for blog-writing is strictly limited at the moment. But I’m loving all the cat posts of the last few days, and I especially love all the support for cat rescue shown by our guest Liz Carlyle and her commenters! I do like hearing stories of everyone’s fabulous, unique, quirky pets….

I’m an equal opportunity pet owner here, two cats and two dogs who live together in (mostly) harmony. My tiny Poodle Abigail has set herself up as Pet Boss, and when they listen to her all goes smoothly. When they don’t–not so much… 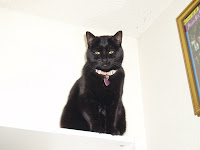 This is my youngest cat, Minnie, who is about 5 or 6. She started out as an outdoor stray, who would come around for food and pets once in a while until she looked in the front window and decided this was Catopia, with soft cat beds, food in bowls all the time, squeaky toys, and clean litter boxes. Then she was determined she wouldn’t stop until she lived in the house all the time. She is my sweet lap-sitter and keyboard-tapper, but she does let Abigail bully her! She would be the shy debutante in a Regency (unlike my late, lamented, brilliant Siamese mix Diana, who would have been a bossy Almack’s patroness…) 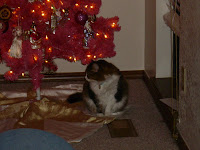 And this is my old boy Gilbert, who is about 14! He was found by a friend of mine living behind a dumpster, poor baby, and when her spoiled cat took against him I let him come live with me. I love him dearly. He’s a beautiful gray striped kitty with a white paw, he loves Gilbert & Sullivan songs (especially The Mikado!) and has always spent most of his time sleeping on the bed, recovering from his hard kitten-hood. He is very cautious and affectionate. I think he would be the crotchety old man with gout sitting in the corner of the ballroom complaining about young people these days. 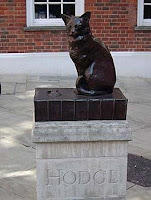 All of this cat business made me think of one of the most famous felines in English history–Samuel Johnson’s cat Hodge (who has his own statue now outside Johnson’s house!). Most of what we know about Hodge (who ate mostly oysters fetched from market by Johnson himself) comes from Boswell, of course. Here is a passage about Hodge from his Life of Samuel Johnson:

“Nor would it be just, under his head, to omit the fondness which he showed for animals which he had taken under his protection. I never shall forget the indulgence with which he treated Hodge, his cat: for whom he himself used to go out and buy oysters…I recollect him one day scrambling up Dr. Johnson’s breast, apparently with much satisfaction, while my friend smiling and half-whistling, rubbed down his back and pulled him by the tail; and when I observed he was a fine cat, saying, ‘Why yes, Sir, but I have had cats whom I liked better than this;’ and then as if perceiving Hodge to be out of countenance, adding, ‘but he is a very fine cat, a very fine cat indeed.'”

After he died, Hodge was eulogized by Johnson’s neighbor Peter Stockdale, who wrote “Who, by his master when caressed, warmly his gratitude expressed, and never failed his thanks to purr, when’er he stroked his sable fur”

Who is your favorite historical cat (or modern-day cat)?? Do you have any favorite animals in novels? (I admit that when I start a book with an animal character, I have to skip to the end to make sure nothing happens to it before I continue…)

Aww! Your kitties are adorable! Thanks for sharing the pics, Amanda and congrats on your progress on the WIP.

I don’t think I’ve ever seen pics of your cats before!!

I can’t think of any cats in books at the moment except The Cat In The Hat and The Chesire Cat.

I always hated how cats were always the villains in books and cartoons. HATED Tom and Jerry. I loved Sylvester and hated Tweety.

Oh yes, I hated how those poor Siamese cats were so maligned in “Lady and the Tramp”!! Poor cats.

I love the quote about Samuel Johnson and his cat.

In the first ms. I ever wrote, I killed a kitten. It lapped up some poisoned wine the villain had sent to the h/h. You should have heard my critique group scream in horror.

Amanda, I think I’ve seen pics of your dogs dressed in many different outfits, but this is the first time I’ve seen your cats! What a fun crew you have!

One of my favorite historical/fictional cats was Grimalkin, the cat who was companion to the Godolphin Arabian. I used him as a model for a cat in my last book, the spin off to our Welbourne anthology!

BTW–you can get miniature versions of the Hodge monument, Dr. Johnson’s cat, as bookends! I got Liz a set for Christmas one year.

My favourite historical cat is the black and white cat that found its way down a chimney when his master, the Duke of Northumberland (I think) was imprisoned for treason in the Tower of London. He kept his master company and kept him sane. Feline devotion indeed!

Deb, I would love to have bookends of Hodge’s statue! My cats don’t really like to have their picture taken-they tend to run off when the camera comes out so I have to sneak up on them. I confess a few days ago I tried a little Halloween costume on Minnie. She was NOT amused.

Grace Elliott, that story rang a bell with me, though I also couldn’t remember exactly who it was! I was sure I had seen a portrait of it, though, so did a quick search and found this article:

It was the Earl of Southampton, in the Tower after the Essex Rebellion, and his cat Trixie. (Trixie doesn’t strike me as very Elizabethan name for a cat though, LOL!)