Good morning! Today I’m going to talk about some of the research I did for JANE AND THE DAMNED which released a few days ago and I’m going to give away two copies of the book. I’ll announce the names of the winners on Monday, so please feel free to comment on yesterday’s post about BESPELLING JANE AUSTEN too.

So who were the Damned in Georgian England? They were the fashionable vampires who were regarded with awe and envy and lust by the ton, and were the favored companions of the Prince of Wales who later became the Prince Regent. Because being fed upon–the euphemism for the Damned’s feeding was dining–was intensely pleasurable for mortals, and because dining was inevitably accompanied by skillful sexual activity (they had had centuries of practice) without any risk of pregnancy and disease, their parties were legendary.

Naturally, etiquette books regarding correct behavior with the Damned became best sellers and I was fortunate enough to acquire a copy of this guide from 1795: 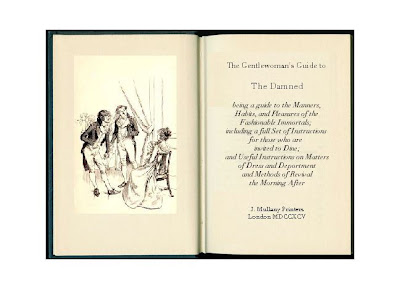 being a guide to the Manners, Habits, and Pleasures of the Fashionable Immortals; including a full Set of Instructions for those who are invited to Dine; and Useful Instructions on Matters of Dress and Deportment and Methods of Revival the Morning After

It’s an extraordinary record of social behavior, with some information I found very useful. For instance:

It is advised that a Lady’s gown should display the neck and shoulders in as revealing a way as possible without actually resorting to Vulgarity, which the Damned abhor, for those areas of the person are naturally of greatest interest to them.

It is unwise to speculate upon the true age of one of the Damned. Generally one should converse on the weather, fashion, and politics.

It appears the Damned did actually provide food for their human guests, as both courtesy and as a matter of practicality to keep up the strength of those who would later provide them with their dinner:

For a guest to remark upon the lack of appetite displayed by the Fashionable Immortal Host is considered Impolite; moreover, a guest is supposed to dine heartily, for the menu will have been prepared with the utmost consideration, as providing the most pleasure for the Damned themselves.

This advice was given for the actual dining experience:

While in the Transport of Sensual Delight which accompanies the Host’s Dining, a lady should remove her necklace, for the teeth of the Damned enjoy Remarkable Sensitivity at such a time. She may also, if she wishes, remove her gloves.

As for the morning after, when the fashionable lady might feel a little wobbly from blood loss, the guide advises that

…although many consider a glass of wine with a drop of Immortal blood dissolved in it to be infinitely superior to any Apothecary’s Brew, the blood will most probably be provided by a fledgling, a lesser member of the society of the Damned. It is most uncivil to refuse on the grounds of the fledgling’s rank, and consider that even a drop of fledgling blood will bring Improvement to the Complexion and Brightness to the Eyes.

What recommendations would you have for an etiquette guide to those consorting with Regency-era vampires?

This entry was posted in Uncategorized and tagged etiquette, Jane and the Damned. Bookmark the permalink.

14 Responses to An Etiquette Guide