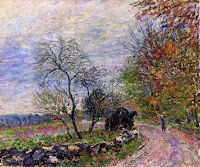 These last few days have seemed like autumn here in Virginia. We’ve had brisk, sunny days and cool nights. Leaves are falling, even though the trees are still stubbornly green.

On 19 September 1819, John Keats took an evening walk along the River Itchen near Winchester and was inspired to write one of the most perfect poems in the English language:

Season of mists and mellow fruitfulness,
Close bosom-friend of the maturing sun;
Conspiring with him how to load and bless
With fruit the vines that round the thatch-eves run;
To bend with apples the moss’d cottage-trees,
And fill all fruit with ripeness to the core;
To swell the gourd, and plump the hazel shells
With a sweet kernel; to set budding more,
And still more, later flowers for the bees,
Until they think warm days will never cease,
For summer has o’er-brimm’d their clammy cells.

Who hath not seen thee oft amid thy store?
Sometimes whoever seeks abroad may find
Thee sitting careless on a granary floor,
Thy hair soft-lifted by the winnowing wind;
Or on a half-reap’d furrow sound asleep,
Drowsed with the fume of poppies, while thy hook
Spares the next swath and all its twined flowers:
And sometimes like a gleaner thou dost keep
Steady thy laden head across a brook;
Or by a cider-press, with patient look,
Thou watchest the last oozings, hours by hours.

Where are the songs of Spring? Ay, where are they?
Think not of them, thou hast thy music too,–
While barred clouds bloom the soft-dying day,
And touch the stubble-plains with rosy hue;
Then in a wailful choir the small gnats mourn
Among the river sallows, borne aloft
Or sinking as the light wind lives or dies;
And full-grown lambs loud bleat from hilly bourn;
Hedge-crickets sing; and now with treble soft
The redbreast whistles from a garden-croft,
And gathering swallows twitter in the skies.

Here’s the poem read by Ben Whishaw, the actor who played Keats in the movie, Bright Star:

I think the imagery in To Autumn is just beautiful, giving the mood of autumn as well as the sights and sounds.

The poem was included in volume of Keats’ works printed in 1820 to better reviews than his earlier works. A year later, Keats died.

You could say he wrote the poem in the autumn of his young life.

Last Friday Megan asked about fall vegetables, so I’ll ask this: If you took a walk near your house, like Keats did, what would catch your eye? What’s your favorite part about being outdoors in autumn?

Check out the review of Chivalrous Captain, Rebel Mistress in the Chicago Tribune!
Don’t forget to visit the new Harlequin Historical blog on eHarlequin and Diane’s Blog on Thursday!

Aloha, Diane! As you know, we do have eternal summer here in Hawaii. I do miss the crisp air, exploding colors, and crunching leaves. But autumn leads to winter – which I do not miss!

I tried to look for a poem about eternal summer, but found another one more appropriate:

Such a sexy poem!

To swell the gourd, and plump the hazel shells
With a sweet kernel

Wow. I wish the actors in Bright Star hadn’t tippy-toed around the poetry so much but it’s nice to see the original ms.

Kim, what a beautiful quotation! and it is so true. May all our Risky friends be happy.

Janet, OMIGOSH. I, of course, completely missed THAT imagery, but now that you’ve pointed it out, what else could it mean?

And I agree with you about the movie. More poetry would have been nice, especially because Wishaw’s voice is quite pleasant!

I’ve added the movie to my Netflix list and I can’t wait to see it. Being in SoCal we don’t get much fall weather either but the air is crisp in the mornings and the wind makes everything more clear and a few trees start to lose their leaves. Also, everyone has their Halloween decorations out.

I too love Keats, that poem is just dreamy!! I live in Florida and our seasons are hot, not so hot, getting hotter, and hottest. So during fall it is just hot. My personal highlight would be that there is a slight chance the humidity will be low enough to let me have one hair day that I do not look like The Bride of Frankenstein. You have to find your silver lining somewhere.

We are having the classic foliage here in upstate NY. There’s a maple tree on my street that sports every color at once and it is a feast for the eyes.

We just went to a local cider mill for fresh cider and maple-walnut donuts. Yum!

Georgie Lee and Kat, you describe the down side of having warm weather year round! May it be a color-riot of autumn in your hearts.

Elena, you are describing exactly what I think of when I think of autumn. Virginia is usually a bit more subdued than upstate NY. The trees are just starting to turn color, though.

I loved hearing the poem (not so much reading it myself only because I can remember disecting poems in class and some of the words are beyond me but in the hearing of it you seem to understand the gist and feeling of it).

I live in PA and the trees our just turning – absolutely gorgeous (until you have to rake them lol).
Where spring flowers are usually pastels, fall flowers are bold and colorful.

Love Keats poetry. As Janet pointed out their is a sexiness, an allure to much of it. Keats saw through things. A rare gift.

I saw an autumn sight today that made me smile. On my drive home a flock of Canadian geese passed low over the road on their way to a nearby pond. They buzzed my car! I slowed down and pulled over to watch them land on the pond. One of those all too perfect things in an imperfect world.

Another favorite sight – my property is very wooded. My outside dogs’ runs create a sort of compound in my back yard (remember my back yard is about five acres) When the leaves of the sweetgum trees turn gold and begin to fall a breeze usually catches them and they dance their way to the pasture behind my property. When they float over and through my dogs’ runs they chase them. There is something beautiful about the colors on the wind and the exuberance of my dogs as they chase after fall and try to hold onto it for just a little while longer.

catslady, I listened to several YouTube recitations of the poem, but Ben Whishaw’s was the best. He had the gentleness that seemed so perfect for the poem.

The leaves are only just starting to turn here, and it’s beautiful (though not as glorious as where you are, Elena!). And thanks for the video–I loved that movie so much

Fall is my favorite season. If I go outside my house, I can look to the mountains and see the leaves starting to change colors. I love to walk in the crisp air, listening to and smelling the leaves crushed underfoot.
Thanks for the poem.

My favorite part about walking around during the fall is seeing the trees changing, dropping their leaves and all (I do not like raking, however). I love seeing people in hybrid clothing–flip flops with sweaters, etc.
And Halloween decorations! I love that.

Missed this yesterday. Fabulous post!
Here in N. CA I love the spicy scent that gets stirred up when I walk in the hills.