Welcome to the second Spooky Tuesday of October! As I was looking around online and in library books for suitable Halloween-ish material for this month, there was way too much to choose from. Today we’ll look at some Ghosts of Famous People, next week some unusual apparitions….

The Tudors provide an embarrassment of riches when it comes to the spirit world. All of them seem to haunt one (or several) places, with lots of shrieking and carrying of heads and things like that. We’ll start by taking a look at some of them:

Hampton Court is rumored to be haunted by at least two of Henry VIII’s wives, Catherine Howard and Jane Seymour. Wife five, Catherine was charged with adultery and placed under house arrest at Hampton Court. The story says that one day she broke free from her guarded rooms and ran down the gallery to try and reach her husband to plead for her life while he was at prayer in the chapel. She was soon retrieved by the guards and dragged back to her rooms, kicking and screaming. Sometimes she can still be heard, and even seen, running and shrieking down the gallery. Ernest Law’s A Short History of Hampton Court (1897) says she runs “towards the door of the Royal Pew, and just as she reaches it, has been observed to hurry back with disordered garments and a ghastly look of despair, uttering at the same time the most unearthly shrieks, till she passes through the door at the end of the gallery.” In 1999 two women on separate tours on the same evening fainted at the same spot in the gallery and declared they suddenly felt frightened. There’s even a rumored video of a “ghost” (possibly Catherine), but I do wonder why the ghost seems able to close the doors so carefully…

Jane Seymour, wife three, is a much more placid ghost (as she was probably a more placid person in life!). She walks through the cobbled courtyard carrying a lighted candle and disappears into a wall. 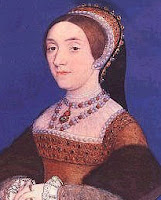 Anne Boleyn is probably the most active of the Tudor wives, and the most dramatic! She is seen at the Tower, with numerous tales of sitings by guards and tourists. She walks near the White Tower, close to the place where the scaffold was erected, and in the chapel of St. Peter ad Vincula where she is buried (sometimes she even leads processions of the executed up the aisle). At Hever Castle she’s seen in the gardens, and on a bridge over the River Eden on Christmas Eve. It’s also said that every year on May 19, the anniversary of her death, a black coach drawn by four black horses races up to Blickling Hall with Anne sitting inside with her head on her lap. The coach stops and she gets out and disappears into the house…. 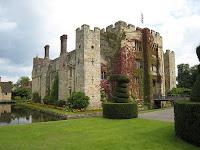 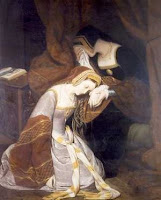 Mary Queen of Scots is one of busiest ghosts in all of England. She seems to haunt every place she ever lived in or even passed by one day. She haunts Stirling Castle, where she’s a sort of pinkish shadow; Borthwick Castle, where she appears in disguise in boy’s clothes (a disguise she used to escape her captors there); Loch Leven Castle; Hermitage Castle in the Borders (she never stayed there, but Bothwell did once); Craignethan Castle; Holyroodhouse (where the blood stain of Rizzio still can’t be washed away…); Bolton Castle; Turret Castle; and the Talbot Hotel in Oundle, which houses the staircase from the demolished Fotheringhay Castle, which she walked down to her execution. It makes me tired just thinking about how much energy all this haunting must take! (But her birthplace at Linlithgow Castle is only haunted by her mother, Marie of Guise)

Castle Rising was built in the 12th century, and for a time (1330-1358) was the home/prison of Queen Isabella, “the She-Wolf” of France. Isabella was the wife of Edward II, and it was said she and her lover Roger Mortimer had the king murdered, and her son then imprisoned her at Castle Rising. It wasn’t quite as dour as that–she lived in her accustomed royal luxury with a full household, but it was said she descended into dementia as she aged and spent her last troubled years locked in the upper story rooms. She died in August 1358, and then came back to the castle. Visitors have reported hearing her shrieking and laughing on the top floor, and residents in the nearby village say they can hear her screams and laughter at night as well.

Moving ahead to the Regency, George IV is said to be haunting his Pavilion in Brighton, the place he loved so much he just couldn’t leave it. In Richard Jones’s Haunted Castles of Britain and Ireland, “It is said that his ghost can still be seen walking the underground passages that link the Pavilion to the Dome. This building at the time was the Royal stables and is now used as a concert and exhibition center. He has also been seen in the tunnel linking the old cellars to the nearby pub the Druid’s Head…” (I think Diane and I actually ate at the Druid’s Head on the Splendors of the Regency tour, at those tables outside with some other friends! If I’d known Prinny was hanging around I would have shared my fish and chips with him) 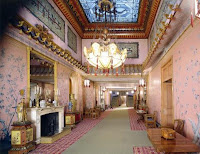 Ham House in Richmond is rumored to be haunted by Elizabeth, the Duchess of Lauderdale, who taps her cane along the floors. It’s also strangely haunted by one of Charles II’s spaniels… 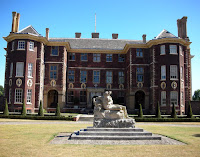 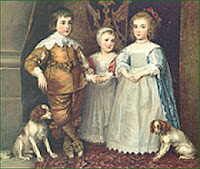 Speaking of Charles II, Nell Gywn is said to haunt Salisbury Hall and also the Gargoyle Club on Dean Street, where her house once stood (her presence is signaled by a strong scent of gardenias and a glimpse of a gray, shadowy figure) 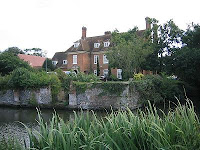 At Byron’s family home of Newstead Abbey, there’s said to be another canine spirit, that of the poet’s Newfoundland Boatswain, who is buried on the estate under an elaborate monument. This is the verse on his obelisk: “NEAR this spot/Are deposited the Remains/of one/Who possessed Beauty/Without Vanity/Strength without Insolence/Courage without Ferocity/And all the Virtues of Man/Without his Vices/This Praise, which could be unmeaning flattery/If inscribed over Human Ashes/Is but a just tribute to the Memory of/”Boatswain” a Dog/Who was born at Newfoundland/May 1803/And died at Newstead Abbey/Nov. 18 1808″ 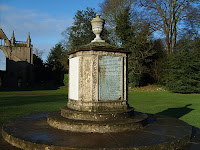 Hall Place, whose earliest sections date to the 14th century, is haunted by the Black Prince (1330-1376), who is said to have courted his wife Joan, the Fair Maid of Kent, there and appears in his dark armor as a harbinger of bad fortune. In the Evening Post of November 29, 1924, an article appeared that declared “Black Prince’s Ghost Said to Have Warned Britain”. Lady Limerick says in this article, “The last time I saw the ghost was on a Sunday evening. The figure was standing by the fireplace in the morning room, and when I went into the room with a friend it glided away through the window into the garden…Sometimes there have been faint sounds of music.” 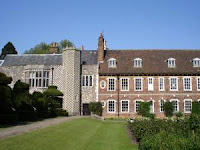 One weird little story I came across says that in the 1830s, when Wellington was Prime Minister and quite unpopular for his opposition to the Reform Bill, the ghost of Cromwell appeared to him at Apsley House and warned him to let the Bill through Parliament. The Bill passed in 1832. Why Cromwell thought to bother himself with it I don’t know.

These are a lot of ghosts, but they are just the tip of the spirit iceberg! Now it’s your turn. If you could meet the ghost of anyone at all, and actually have a coherent (non-scary) conversation with them, who would you choose? What would you ask them? And which of these ghosts would make the best Halloween costume???

Great post! I’d like to talk to Ann Boleyn because I came to admire her after watching Showtime’s The Tudors. I would like to ask her how much of her portrayal in books and screen is accurate!

I’ve felt ghostly presences in historic places–Marie Antoinette at Versailles’ Petit Trianon, and Cat Howard (whom I portrayed once in a play) at Hampton Court Palace.

I did laugh a bit at the description of Nell Gwyn’s spectre carrying the aroma of gardenia, as the flower wasn’t imported to England until the mid-18th century, and Nell died in 1687! Maybe she had access to gardenia perfume in the afterlife, but it’s highly unlikely she did during her temporal life!

Some people refuse to let historical fact get in the way of a good ghost story. Doesn’t bother me but it does afford much amusement!

LOL Margaret–I wondered about the perfume too, but all the sources I could find said gardenias. I guess since she’s able to walk around down here scaring people, she can help herself to some perfume from a dressing table as well. :)) (I wonder if she tries modern lipstick?)

It’s so weird, but I also had an “odd” feeling at the Petit Trianon, especially when I found myself walking alone down a shady pathway towards the Hameau. But it was a happy feeling, not a claustrophobic melancholy like at the Tower.

Kim, I would also like to meet Anne Boleyn very much! I’ve been a fan of hers for a long time. Jane Austen would be another good ghost to meet, or maybe Elizabeth I…

I have enjoyed reading this blog today, thank you. The video was great!
Penney

We did indeed eat outside at the Druid’s Head, Amanda! I remember it being very chilly. Maybe that was Prinny seated with us.

For a Halloween costume, I vote for Ann Boleyn, too, but definitelyl carrying her head.

That video, if real, is definitely spooky!

I just find it so hard to believe in ghosts, but if I could meet anyone?

Hm. Whom would I choose?

Maybe Eleanor of Aquitaine, so I could pick up some ‘how to control men and be dazzlingly alluring all at the same time’ tips. Although she did end up imprisoned, so maybe not.

Not sure who I’d have liked to meet! Austen, perhaps, but only if I was as close to her as her sister–otherwise she would just nod and be polite, not snark.

This one is going the research folder. LOVE a good ghost story!

My brother and his wife actually work (as volunteers) with a paranormal research and cleansing team. They got involved after my completely doubting brother called them in as a last resort to see if they could stop some disturbances in his house. They’ve been doing paranormal research in their spare time ever since.

I think I’d like to have a nice coze over tea with Elizabeth I. I admire her very much. When I think of the tragedy of her childhood and the real danger of her early years she devoted herself to England and was wise enough to surround herself with some pretty smart cookies.

Best Halloween costume – Anne Boleyn carrying her head.
It is hard to decide which ghost I would like to have a conversation with. There are so many to find out the truth from.