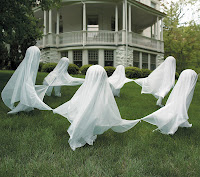 I can’t believe it’s almost the end of October! It’s flown past and soon it will be time to think about Thanksgiving and (gasp!) Christmas. But there is still plenty of time left for more spookiness….

Last Tuesday we looked at some famous ghosts of the UK (Anne Boleyn, Mary Queen of Scots, etc)–today we’ll look at some interesting apparitions, not necessarily ghosts (whatever we think a “ghost” is) but stuff that is pretty creepy anyway. In many parts of the world, there are lots of legends of spirits and “phantom lights” wandering roadways, hitchhiking or just generally floating around being creepy. (When I was a teenager, I remember tales of a certain spot outside town where ghost lights could be seen, and the spirit of a girl who was run over on a railroad track and pushes cars over the fatal spot. But I was never brave enough to go look for myself…) There are also ghost cars and phantom carriages pulled by ghoulish horses and headless coachmen. The streets can be dangerous places.

There are also lots of haunted World War II airfields in England, places where scores of young men flew off to their doom and now keep coming back to their airstrips. One legend combines the haunted airstrip with the roadway ghost. At the remains of RAF Metheringham, a young woman is spotted standing by the road just outside the gates between 9 and 10 at night. She wears a pale green coat and gray scarf with an RAF wings badge pinned to her collar. She stops passers-by and asks for help, telling them her boyfriend had a motorcycle accident and is injured nearby. She looks quite real–until she suddenly vanishes, and leaves a feeling of fear and panic behind, along with an unpleasant smell. (Legend has it she was killed when riding the motorcycle with her fiance).

Biggin Hill airfield is perhaps the most famous of the “haunted airfields”–phantom Spitfires fly overhead, heard but not seen, and sometimes airmen dressed in trench coats walk through the village before disappearing. Another similar spot is Bircham Newton, where doomed airmen are said to play squash in deserted buildings. 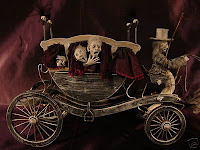 One famous manifestation of the “phantom carriage” is Lady Howard, a 17th century noblewoman who was widowed 4 times and also lost her young son. Strangely, in life she had a good reputation, despite a horrible father who was detested in the local village (and killed himself) and one abusive husband who (shockers!) divorced her, but her other 3 marriages were content enough and she was charitable and well-liked. Now in death she is cursed to ride each night in a carriage made of the bones of her 4 husbands and accompanied by a huge black dog with blood-red eyes and driven by a headless coachman. The ghostly-white figure of a lady can be glimpsed inside. It leaves behind a foul smell, and it’s said that if it stops at any door or for anyone on the road, that person will die.

“And horses two and four;
My ladye hath a black blood-hound
That runneth on before.
My ladye’s coach hath nodding plumes,
The driver hath no head;
My ladye is an ashen white,
As one that is long dead.”
Black demon dogs are another favorite legendary haunt. They’re called different names–the Barghest and Gytrash of Yorkshire, Black Shuck of East Anglia, and Bogey Beast of Lancashire. They’re often associated with lightning storms, crossroads, places of execution, and isolated pathways. They’re often a harbinger of doom for those who see them (of course–what else would giant black dogs with blood-red eyes be doing??? Very Hound of the Baskervilles)

Another harbiner of doom is an apparition called a “Radiant Boy”–a child often wearing white, very blond and pretty. But beware looking in his eyes! (It’s speculated that these are a legacy of early Nordic settlers in the 9th and 10th centuries in Cumberland and Northumberland, since they are also common in Scandinavia). One “radiant boy” incident took place in 1803, when a rector and his wife visited the noble Howard family at Corby Castle in Cumberland (maybe best to avoid those Howards?). After dinner they retired to their guest chamber where they were woken up very late by a glimmer next to the bed that increased in light until it was overwhelming. A boy wearing white formed in the light, and looked in the rector’s eyes until he turned and disappeared. The couple ran out early the next morning, but the rector later gave a statement about what they saw to the Howards. (There is also a legend of Castlereagh seeing a radiant boy in Ireland, years before his tragic death…) 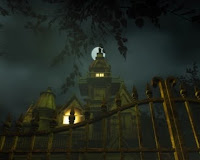 One last weird case, completely different from black dogs and haunted airfields, is the Phantom Drummer of Tedworth, a famous case of poltergeist in the 1660s in Wiltshire. A man named William Drury was annoying people with banging on a drum all the time (sounds like a neighbor in my old apartment!), and John Mompesson filed a complaint. Drury was released but his drum confiscated and given to Mompesson for safekeeping. The drum started making continual noises all on its own, sometimes accompanied by stuff like objects hurled across the room, terrible smells, disembodied voices, chamber pots overturned (yuck!), doors opening and slamming shut, children pinched, etc. Classic poltergeist activity. A minister came to investigate and saw some of the occurrences for himself. He thought an evil spirit must be responsible, but here is the twist–it turned out to be a living person (or so the legend goes).

Drury had meanwhile been arrested again for theft and was in Gloucester Gaol. He claimed he caused the activity because he wanted his drum back. He was tried for witchcraft, but amazingly got off easy–he was just told to leave the county. The activity stopped.

These are just a very, very few of the fascinating, creepy stuff I’ve found when researching these posts! I think I need to sleep with the lights on now. What are some of your favorite old legends and stories? And next week I’ll be looking at the history behind popular Halloween activities. What do you like to do on the holiday? (Obviously I like to dress up, but I also have the unfortunate driving desire to eat lots and lots of mini Snickers bars. I like the Halloween parade, but avoid haunted houses…)

Aloha, Amanda! Several of the ghosts you refer to – Lady Howard and Phantom Hounds – are part of local lore in Dartmoor, Devon. I grew up visiting my Grandmother in Torquay and she would take us for a picnic on Dartmoor. During the day, it was beautiful. But at night it was haunting. Here’s a link for more local legends:

Amanda, I can’t top any of your stories though I enjoy the creepy stuff, too.

That having been said, Halloween at my household is less about the creepiness and more just a chance to play dress-up. My kids are into Star Trek this year and are going as Vulcans. We have the ears and look forward to trying out the makeup for the eyebrows. 🙂

LOL Elena! I hope you’ll share pics of your Vulcans with us–that sounds too fun. 🙂 I have an Alice in Wonderland costume this year (more like the classic version than the Tim Burton movie!). The dressing-up is definitely the best thing about Halloween

Hope those phantom coachmen aren’t texting while they drive … altho I suppose it wouldn’t make much difference to them.

I share a ghost story from Hawaii. The volcano goddess, Pele, broke up with her lover (half man, half pig, which really is one man). She banished him to the leeward side of Oahu (Pearl Harbor) while she kept to windward side (Kaneohe Bay). It is kapu (forbidden) to bring any pork products on the Pali Highway which connects the two sides of the island. Legend says that if you do, your vehicle will break down and a white dog will appear to haunt you.

Amanda, Kristine Hughes tells of a ghost sighting at the Grenadier Club in London…And not the ghost in the guard house!

I scare easily and it is midnight, so no stories from me. Enjoyed your post. When we lived in the Washington, DC area, the Washington Post published a supplement around Halloween each year. It had some wonderful stories of local hauntings, ghosts, and unexplained events.