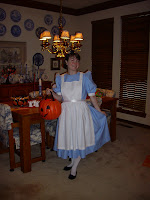 Happy Halloween week, everyone! I can’t believe the holiday is getting so close, I need to go buy more candy and put the finishing touches on the decorations. The weather is finally cooperating here, getting cool and crisp, with leaves drifting to the ground and cloudy, spooky evenings, perfect for little trick or treaters…

I thought, since we’ve looked at various haunts and ghosts this month, we’d wrap up with a little info about the Halloween traditions we still do today. For one–costumes! This is my favorite part of the holiday, since I love to dress up. (This is my Alice in Wonderland costume, which I wore to the Ghouls Gone Wild Halloween parade last weekend! You can’t see it in this pic, but I have a great Alice headband I bought at the Disney Store). The practice of dressing up in costumes and going door to door asking for treats dates back to the Middle Ages (though not quite in the same form we use today!) and is part of the same tradition as Christmas wassailing. Then it was called “souling” and people would go from village house to village house on Hallowmas (November 1), asking for food in return for prayers for the dead on All Souls Day (November 2). This seems to have originated in Ireland and England, but there are details that show it was in practice as far south as Italy. In Two Gentlemen of Verona, Shakespeare has a line about “puling like a beggar at Hallowmas.” Wearing costumes can be traced back to an ancient Celtic tradition of wearing masks and disguises to fool the spirits on this day, when the veil between the two worlds was thinnest. 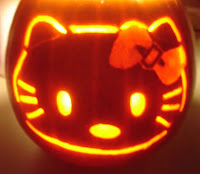 “Souling” also involved using candle lanterns carved from turnips to commemorate the dead. Large turnips were hollowed out and carved with scary faces, then placed in windows to keep spirits away. (Pumpkins started being used in the New World, where they were widely available and larger, thus easier to carve than turnips!). I don’t think Hello Kitty was a motif used back then, but I love this pic…

There always seem to be games at Halloween parties, like bobbing for apples. Traditional games seem to involve divination of some sort–a traditional Scottish practice said that to divine one’s future spouse you should peel an apple in one long strip, then toss it over your shoulder. It will form the spouse’s initials. (This seems pretty iffy to me!). Unmarried ladies were also told if they sat in a dark room and looked into a mirror on Halloween night, the face of their future husband would appear in the mirror. But if they were to die before they married, a skull would appear instead! (This seems to be a variation of the “Bloody Mary” game so beloved of slumber parties…). Thsi sort of thing seemed so popular in Victorian/Edwardian times that there was a wide range of postcards available for the holiday.

I have a couple of great books that tell more of the history and traditions of Halloween! If you’d like to read more, check out Nicholas Rogers’s Halloween: From Pagan Ritual to Party Night and David J. Skal’s Death Makes a Holiday: A Cultural History of Halloween.

If you happen to be in the UK for the holiday (as I wish I was!), Hampton Court is offering Ghost Tours, and the Tower is having rare after-dark Twilight Tours I will just be dressing up my dogs in their costumes and handing out candy to trick or treaters, but I guess I can pretend it’s the Tower….

What are your plans for the holiday??? (And don’t forget, I will be back here on Sunday, the 31st to talk about my November releases, a new “Undone” short story, To Court, Capture, and Conquer and “Snowbound and Seduced” in Regency Christmas Proposals. I’ll be giving away copies, too–a sort of Halloween treat…)

I’m guessing that apple-peel initial divination would always prophesy marriage to Charles, Oscar, and James, but never to their friends Arthur, Henry, and Xavier. 😉

Our Halloween plans are low-key as can be. One of us will take our daughter trick-or-treating (she’s going as a Littlest Pet Shop cat), while the other will stay home ready to hand out candy.

You make an adorable Alice!

I’ll be attending Spiral Dance in San Francisco on Saturday with friends and tending the doorbell on Sunday. Neighbor warned me to expect 300+ masked beggars. We are armed with pretty much everything Hershey makes.

On Saturday, I have a Halloween Party to attend and plan to go as a hippie. Or I might just throw on the Regency dress.

I have purchased candy for Sunday and have eaten one bag….

I’m getting ready to do Vulcan makeup on my kids. We tested it out already and it looked great! We also are going to carve pumpkins with a Star Trek theme. 🙂

Your Halloween plans sounds wonderful! And Amanda that costume is too darling for words! Did you get any photos of you in the parade?

Unfortunately, I have to work Halloween from 1 PM to 10 PM. I will be fighting ice demons and snow devils as I do my monthly inventory in the bakery freezer. I guess once I am done I could go trick or treating as the abominable snowmanager!

Wish I was in England instead!

LOL Susanna! I would be very impressed if the peel made an A on the floor…

Elena, I hope you’ll share some pics of your Vulcans! Your daughters always come up with such clever and imaginative costumes.

Louisa, I would love to see you show up at my door as the abominable snowmanager! 🙂 I would also rather be on a ghost tour in England, for sure. (and I did take a pic at the parade, but it’s so dark you can hardly see anything!)