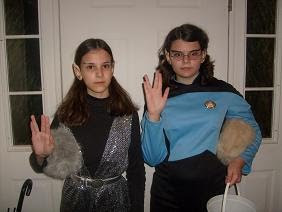 By popular request (Amanda’s), here are my Vulcans. Note the properly stoic expressions. My older one is a science officer in Starfleet; the younger is still living on Vulcan and studying for the Starfleet Academy entrance exams. We always have a script. 🙂

We like to carve pumpkins to go with the theme. Here they are. We are rather proud of them, but we are not the only ones to do this. Googling around, I found some really amazing Star Trek themed pumpkins. I also found this Jane Austen pumpkin. Cool, no? 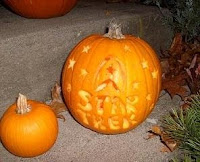 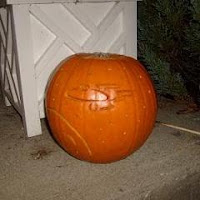 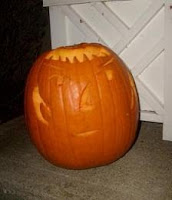 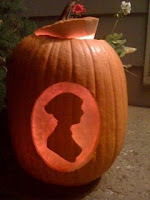 “Shared worlds” like Star Trek are a lot of fun. Other popular shared worlds are Oz, Tolkien’s Middle Earth, the world of Harry Potter, and historical periods like the Regency.
People love these worlds so much that they create collections, go to conventions and play dress-up. They also get upset if there are inaccuracies (or perceived inaccuracies) in their portrayal. There are all sorts of reactions, from the reasonable to ones who have perhaps forgotten that this is all in fun? There are people who created online lists of every deviation from the books in Peter Jackson’s LOTR films. A friend who does Civil War reenactments has been criticized for using a machine to make her dresses.
And probably every author of Regency romance has or will hear from a reader upset over her depiction of the Regency.

Sometimes these are about real historical inaccuracies–Regency fans are extremely knowledgeable and authors can and do make mistakes, despite sincere attempts at accuracy. (It’s the stuff you didn’t realize to look up that bites you.) But I also think some readers form their notion of the Regency not from history, but from other books they’ve read, which adds to the confusion.

There are so many variations on the Regency. There’s the real historical Regency. There’s the Regency according to Jane Austen: accurate, but limited to the sorts of events and situations she experienced personally. (For instance, I read that she never wrote a scene with only male characters.) There’s a somewhat different Regency in Georgette Heyer’s books. A slightly different version again in the old traditional Regencies, and yet again with the long historicals.
There’s no other way to explain readers who think no one had sex during the Regency (I got that in an Amazon review once). Perhaps there are some now who think dukes regularly married courtesans. (Improbable, but why not?)

I find it hilarious–and also kind of charming–how many versions of the Regency authors have created. How many more peers of the Realm can the island possibly hold? Yeah, I’m guilty of adding my part. Though I do my research, I know that the world I depict is largely in my own head. I hope readers will enjoy it, too. That’s the whole point.

What do you think? have other favorite shared worlds? Did you “visit” any of them for Halloween?

What adorable little Vulcans! What fun is it without a backstory?

Personally, I view each author’s story as their own world. That way it never gets overcrowded with the peerage. Though Barbara Cartland might be able to do so. 🙂

I’m a Middle-earther myself, but not a purist. Then there’s Twilight. I wasn’t a fan, at all, at first, but my nieces loved it, so I read it, and was hooked by the fourth book. Named my dad’s car Edward because it’s fast, hard, and white and sparkles in sunlight. 😀

I love these shared worlds. I certainly “live” in a Regency of my own creation, a bit different from others, I’m sure.

I think Star Trek is such a wonderful phenomenon. It was perhaps the first series whose fantasy world I really loved to visit. For a series that had such a short run, it has an endless life!

Elena, your Vulcans are darling!!! and their expressions are just right.

On Sewing Machines:
The Sewing Machine was invented in 1840. Check with the Smithsonian if you do not believe me. A Civil War buff can indeed use one to make her dress and should not be criticized for it. To all the critics (in any genre of all-in-fun reenactments), I would say GET A LIFE!
I feel the same about minor historical liberties in my romance novels.
By the way, you have the cutest little Vulcans in your house.
–Susan in AZ

So glad you enjoyed my Vulcans. I do too. 🙂

Susan, that is interesting about the sewing machine. Perhaps my friend was criticized because she uses a modern one? Or maybe it wasn’t commonly used yet.

But when thinking about accuracy, I’m ready to embrace anything that’s plausible, not just what was common.

Your Vulcans look terrific! And I love how they always have a back-story for their costumes. 🙂 (I wish I could figure out how to make that Austen jack o lantern for next year…)

I just finished reading Bill Bryson’s fabulous new book “At Home”, a sort of general history of domestic life, and realized that “my” historical world is not nearly as dirty, smelly, dark, and inconvenient as the real one. 🙂 (and there are no rat infestations either–shudder)

What adorable Vulcans! Although i suppose it is not logical to refer to Vulcans as adorable!

I try to spend as much time in Regency world as I can. For the most part because Walmart world is SO horrible!

In my reading I tend not to be terribly hard on someone for minor mistakes or things that have been acceptable in historical romance for years. However, if something pulls me out of the story I tend to be a bit harder to please!

Hi, Elena!! So good to “see” you. Love your Vulcans. We had a Star Trek costume or two around this house once upon a time.

Love the Vulcans! And do I spot a tribble under the arm of the Starfleet officer?

I had one very, erm, knowledgable (if knowledgable = picky) friend spontaneously tell me I’d had two anachronistic words in Gamester. But when I went to check if she was right, the OED backed me up! So there. 😉

I love Middle Earth — when I was a kid, I wanted to live in Lothlorien. (Yeah, Gondor and Rivendell weren’t good enough for a greedy little kid like me.) I never wrote any fanfiction set there, though the high fantasy book I plotted as a teen bore a striking resemblance to Middle Earth. 🙂

Yes, they both have tribbles (one tan, one gray). They even vibrate and trill when you tap them. A big hit. 🙂

Amanda, I’m OK with a slightly cleaner world. People then probably didn’t notice things we would now, so I see no need to mention them anyway. Rats are only OK if you have a sexy ratcatcher hero as in Judith Ivory’s PROPOSITION. I’m not sure anyone should try to imitate that. 🙂

Thank you for an enjoyable post. I have been a witch of some sort at work the past few years. Some days that is not much of a stretch, ask my co-workers. Since I was a children’s librarian, I dressed in costumes frequently. That is oddly a part of the job I really miss. I even had costumes for my large teddy bears and they don’t get to wear them any more : (

Loved your Star Trek theme. The pumpkin tie in to you theme is cool.