Elena’s point about our own particular Regency worlds, all perhaps a bit different, made an impression on me. How true it is! Even if we were writing non-fiction, biographies or histories, we still would be putting it through the prism of our own vision. This got me thinking…. 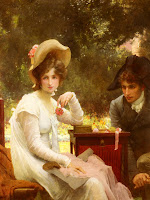 Two Victorian artists, Marcus Stone and Edmund Blair Leighton, created a romanticized Regency full of images that you might find familiar. These artists looked back in time and imagined their own idea of the Regency.

Take a look at the painting on the left, a beautiful Regency scene. It’s no surprise that this painting by Marcus Stone graced the cover of Janet’s The Rules of Gentility.

Marcus Stone started his career illustrating books for Charles Dickens, who had been a friend of Stone’s father and took an interest in 19 year old Marcus, when the elder Stone died. Late in his career, Stone specialized in these sentimental paintings that present a very pretty, idealized version of the Regency (and make the images desireable for book covers).

Here are some more of Stone’s Regency Paintings. 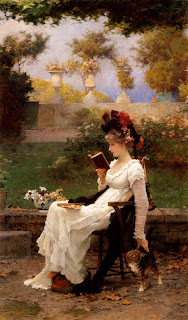 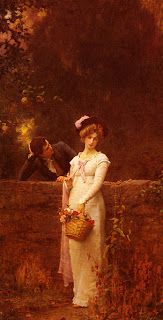 Edmund Blair Leighton, like Stone, was the son of an artist, but his father died when Leighton was two years old. Although he trained for a different career, art turned out to be in his blood. He specialized in historical paintings of the medieval and Regency period. His first painting was accepted at the Royal Academy.

Here are some of his romantic Regency paintings: 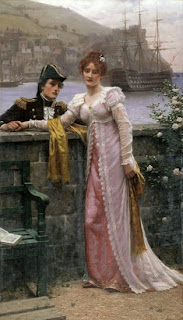 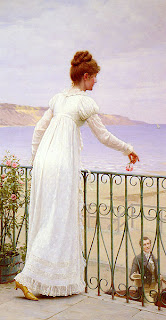 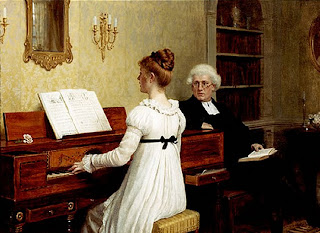 Yes, these paintings are very sentimental and idealized, but what I love about them is that they all tell a story. The last one is called Playing for the Reverend, but can’t you just spin a story around that one? Or the one with the naval officer. What did he say to her? 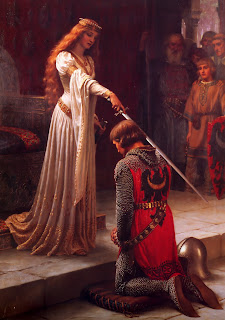 Leighton was largely forgotten as an artist, even though his paintings were very popular in their day. In fact, he painted an iconic medieval image that I’ll bet you’ve seen over and over. It’s called The Accolade.

I’ll be back at my own blog on Thursday, Veteran’s Day!

I love the picture with the young woman in the white dress on the balcony. These images may be a bit idealized, but they do give us a feel for the Regency world, at least the more genteel side of it. They are lovely. When they are used for book covers, the set the tone for the book before you even start reading.

I love the feel of gentility that these paintings portray. I know that not all of Regency England was like that, but I like the ideal that they represent.

I agree with both of you, librarypat and Daz. You both mention gentility and that is the perfect word for the paintings!

One wonders if these late Victorians/early Edwardians did idealize the Regency, like we do!

Thanks, Diane. These do have something of a Victorian feeling about them but they are very pretty. Other than Janet’s book, I haven’t seen them on covers.

I do love covers that use period
artwork. Mary Balogh had a lovely one with a (head out of the picture) Mme Recamier, if I remember correctly.

The Marcus Stone painting on Janet’s cover was also used in a somewhat modified form on a book edited by Jennifer Crusie: “Flirting with Pride & Prejudice”.

I agree with Elena that these pictures feel Victorian, rather than Regency, but they are pretty nonetheless. I’m old-fashioned in that I like paintings that tell a story or that invite you, the viewer, to imagine a story.

Question for the authors out there: Has there ever been a painting/photograph/sculpture that inspired you to write a story?

I guess they do seem Victorian in their almost melodrama, but, to me, they show a lightness and beauty that is in *my* Regency.

I’ve always found those paintings VERY Victorian (there’s something about the women’s faces, their expressions, and their hair that just isn’t Regency for me. Pretty, but wrong (like Victorians in fancy dress).

And you couldn’t be more right about us all creating our own versions of history. World-building in historicals is every bit as important as it is in paranormals (I sometimes think it’s harder, since we’re constrained by all those messy facts).

Question for the authors out there: Has there ever been a painting/photograph/sculpture that inspired you to write a story?

I based the scandal that befell the heroine of Lord Scandal on the real life scandal surrounding John Singer Sargent’s portrait of Virginie Gautreau (aka Madam X). Such outrageous fuss over a shoulder strap . . .

Isobel, I am sure you, with your experience with the period fashions, do have a better honed sense of the Victorian in the paintings. Most of them seem sad, in a way, like the men are trying to entice the women into something they know they should not do. That seems Victorian to me.

I love that Sargent painting. It is so beautiful.

It isn’t the clothes that seem wrong to me. It’s the face and hair (as with so many movies). The models have a very Victorian aesthetic to them.

All I know is that they truly are such lovely pictures!

They are lovely! Of course they are idealized and a bit dreamy. I would imagine that is how people of the Victorian age saw the Regency.

There is a grace and elegance to them and a very sweet romanticism.

My second novel THE RAVEN’S HEART was inspired by a photograph of a tree-lined path that led into the mists at the edge of the cliffs of Dunwich. It was a black and white photograph, very mysterious and foreboding. I just saw the first scene of my story in that photo and the rest came from that.

My current WIP is based partially on a 1676 line drawing by Winstanley of the palatial mansion called Audley End, at one time the largest private home in England.

I actually have a couple of these images hanging on my wall! 🙂

I understood you were talking about the hair, Isobel!

catslady, did you notice the cat in the painting about the lady reading the book?

Louisa, I think it is cool that your books were inspired by pictures.

Amanda/Laurel, why am I not surprised you have these images on your walls?

I like Stone’s paintings. I can definitely spin a story from “a stolen kiss”. He could be a rake. Or he could be a brooding gentleman who had a crush on his childhood lady friend.

My comment yesterday got ate by Blogger, but I wanted to thank you, Diane, for the book pimpage, and also make the point that Isobel made, that the faces represent a late Victorian ideal of beauty. Big-chinned Gibson girls!

I wonder too if the move toward more simple clothing (after crinolines and bustles were no longer in fashion) at the end of the 19c made people nostalgic for granny’s grecian gowns.