Happy Tuesday, everyone! Hope you’re all having a great week so far. I’ve been busy with revisions, researching the next project (set at the court of Mary Queen of Scots!), getting ready for holidays, and planning some promo for my December Laurel McKee release (watch for blog tour dates, coming soon!). I’m also trying to pack to go out of town for a few days–if you happen to be in New Mexico, I’ll be doing a workshop on historical fashion at the LERA RWA chapter in Albuquerque on Saturday…

In the meantime, I’ve been thinking about the “Regency worlds” the other Riskies have been talking about lately, which goes along perfectly with the book I just finished reading, At Home by Bill Bryson. I love Bryson’s travel narratives (especially Notes from a Small Island about England and In a Sunburned Country about Australia), and while At Home is not as laugh-out-loud hysterical as some of his other work it’s very entertaining. Here is the starred review from Publishers Weekly:

“Bryson takes readers on a tour of his house, a rural English parsonage, and finds it crammed with 10,000 years of fascinating historical bric-a-brac. Each room becomes a starting point for a free-ranging discussion of rarely noticed but foundational aspects of social life. A visit to the kitchen prompts disquisitions on food adulteration and gluttony; a peek into the bedroom reveals nutty sex nostrums and the horrors of pre-modern surgery; in the study we find rats and locusts; a stop in the scullery illuminates the put-upon lives of servants. Bryson follows his inquisitiveness wherever it goes from Darwinian evolution to the invention of the lawnmower, while savoring eccentric characters and untoward events. There are many guilty pleasures, from Bryson’s droll prose–“What really turned the Victorians to bathing, however, was the realization that it could be gloriously punishing”–to the many tantalizing glimpses behind closed doors at aristocratic English country houses. In demonstrating how everything we take for granted, from comfortable furniture to smoke-free air, went from unimaginable luxury to humdrum routine, Bryson shows us how odd and improbable our own lives really are.” 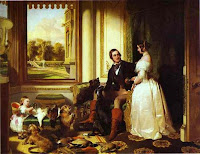 So, yeah–to someone addicted to historical trivia like I am, this book was pure reading gold. I couldn’t wait to see where the narrative would go next, as it was never predictable. Most of the history here is Victorian (using the 1851 Great Exhibition as a jumping-off point) but there are looks at prehistoric Britain, early 19th century America (with Jefferson’s Monticello) and Regency England (the state of obstetrics, using poor Princess Charlotte as an example), and the Elizabethan building boom (“Hardwick Hall, more glass than wall,” plus a tantalizing anecdote about Elizabeth I pilfering silver at someone’s house). This is just barely touching the surface of everything he talks about.

But it made me realize something–“my” historical world, the one I have in my head when I read and especially when I write–is much better-lit and more comfortable than the reality. When I envision ballrooms or a family gathered in a drawing room in the evening, there is much more light than that from candles, and when the hero and heroine get to it on the bed the mattress is not too soft or too firm and it’s comfortable, no soggy feathers, crackly straw, or unwanted vermin. Everyone smells good and has pretty hair and clean underthings. And in my imagination that probably won’t change! I like to think this is how they would have seen things. But I may incorporate some of the more interesting tidbits I found in this book in stories…

Now I’m deciding what to read on my road trip! I’m thinking Meljean Brooks’ The Iron Duke, because I’ve heard such fabulous things about it and I love steampunk, and I just got the new memoirs of Deborah Mitford, Dowager Duchess of Devonshire, which I am dying to delve into.

What have you been reading lately? What are some of your favorite historical anecdotes, or subjects you’d like to learn more of?

Until you made this comment Amanda, I never realized that my Regency world isn’t at all what the real Regency world was like. Huh….interesting. But then my introduction to Regency was JA and she doesn’t really do a lot of the dirt and squalor in her books. That’s why I have issues with the Keira Knightly and Kate Beckinsale JA movie adaptations. They are too much Thomas Hardy meets JA.

Right now I am updating JA’s Northanger Abbey and I’m writing about Florence where I’ve never been, but I’ve been doing lots of research.

The one thing that is surprising me is I’ve read about how all the Riskies have said something to the effect of “my character showed up somewhere and I didn’t know he or she was there” or “my characters are not behaving”. I never understood it until I started to write a novel myself. I signed up of Nanowrimo because Meg Frampton just made it sound like so much fun. (Meg, I’m rjstouva if you’d like another writing buddy.) My characters are no behaving how I thought they would either and it’s very interesting.

I also recently finished At Home and found it fascinating. I too have a bad habit of forgetting how uncomfortable my characters would have things, unless I need them to be roughing it in a scene. I do remember once reading by candlelight during a power outage and thinking that 100-150 years ago, this was what night was LIKE.

Right now I’m re-reading Save the Cat, since I have to write a synopsis for a book I haven’t finished yet. It’s a new experience for me, so I’m looking for some pointers on describing what should happen next beyond “assorted minor crises, literary equivalent of a training montage, near-death experience, ANGSTY SEX, gossip, quarreling, BIG DANG BATTLE SCENE, sequel set-up.”

LOL, JA and Susanna! I try and tell myself that to my characters their surroundings wouldn’t be uncomfortable or smelly, because that’s just how things WERE and they wouldn’t notice it so much (unless it was something extreme like the “Great Stink” in Bryson’s book…), so I don’t have to notice it either.

Would it be okay if I asked for some advice? I hope so

My MC is Khaki and she’s researching her PHD in Florence. She keeps seeing this guy but they really haven’t officially met. I wanted them to meet while Khaki was viewing the statue of David and she faints because there’s a disease called Stendhal Syndrome where you faint in the presence of great beauty. Most people find out they have it when they see David. And she’s caught by a Welshman named Dafydd (he’s the DH). I am in love with this meet, but

I was writing a scene where Khaki was having a day of gluttony in Florence….having gelato for breakfast and now she’s drinking coffee. Dafydd is in the square. Khaki thinks about following him. Should she? Should they meet now instead? And then meet again at the museum? I feel like these almost meets are a little too much. They’ve had three so far and haven’t met. I’d love some help.

Yipes. You didn’t get an answer, JA!
I don’t know what to say about the almost meets. Sounds like you are building tension and reader expectation (‘When will they meet?’). So my suggestion is to escalate it but not actually have them really meet, like maybe say a few words but not introduce themselves)

Okay, Amanda. You are now responsible for me buying two of Bryson’s books! Luckily (or unluckily) his books are available on Kindle.

LOL Diane! I hope you enjoy them 🙂

JA, it sounds to me like your story is actually set-up around the near-meetings of your characters, that it’s a theme of the story, so I say go for it