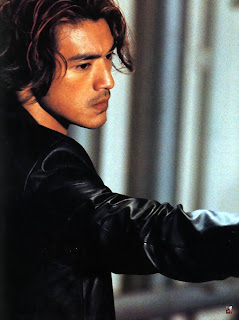 This week, as Carolyn mentioned on Wednesday, she and her ridiculously smart offspring are here in Brooklyn visiting; thus far, we’ve been to the Pop Tarts store (see Carolyn’s post), seen the musical Wicked (so fun!), had Vietnamese food, watched Mongol, written side-by-side at my breakfast bar, had a Random Facts contest (my son did well enough against Carolyn’s RSO, but the RSO still won).

But earlier this week I did get to write, and this week I’ve been working on my Urban Fantasy, which is about a New York that is definitely a melting pot, in a melting pot of species ways. There are, however, evil plans afoot, and my heroine (a normal, if insecure, woman) and hero (a foxy demon who wears goofy t-shirts) have had to team up to suss out the evil plans. Here’s a bit:

He rose to a crouch, clutching the knife with one hand as he pushed the dark curtain of hair in front of his face onto his back.

If he were going to continue this, he should start braiding it or something. Maybe some barrettes?

The thought made me giggle.

“And here I thought you would perhaps be frightened by the prospect of some sort of explosion occurring,” he said, a dry tone to his voice.

He gripped the knife harder, his knuckles showing white.

He was really going to go out there and do something about this, wasn’t he? Suddenly I didn’t feel like laughing anymore.

“Be careful,” I whispered as he rose to his full height. My face was right next to his boots, and a part of my brain noticed how bad-ass they were. Which shouldn’t surprise me, everything but his t-shirt was bad-ass, and even that was bad-ass in an ironic hipster way.

Wait, did that mean ironic hipsters were demons, too?

No, that would be too much to hope for. They lived in Williamsburgh, not Hell. I bet Hell had fewer dive bars.

I squeezed my eyes shut as he began to move. I heard a hiss, and a knowing chuckle (one of these days, I was going to have to ask about arch villains’ maniacal laughter; what was it with those guys, anyway?).

And then I heard something far more frightening than maniacal laughter: The sound of death. Deeply unpleasant death, not that any death was pleasant. Unless it was Death By Chocolate.

I hoped to God–wait, no I didn’t–that my evil demon guy would win. Although I didn’t know if demons were automatically evil; this guy lacked much of a sense of humor, but that didn’t make him evil, did it? And he was doing his best to protect me, which in everyone’s eyes but my third-grade teacher and my next-door neighbor George Soulias would be a good thing.

I did finish the work I posted last week, and am tweaking a bit before sending to the Champion Agent. Yay! And the Champion Agent just submitted some more of my mss. out to the world, so double Yay! and Yikes, too!

What Random Fact do you know? (Not that I have a chance, but maybe I can at least hold my own).

However, here’s a random fact. If you make Chocolate chip cookies (or choc choc chip cookies) a *light* sprinkling of salt on top prior to baking intensifies the chocolate flavor. If you have a salt grinder, 1-2 turns of the grinder is enough.

Re random facts, I know some bizarre stuff about dog breeding, but it’s not that sort of a blog, not even from me.

But… did you know that ALL HAMSTERS EVERWHERE are descended from one litter found in the desert in Syria (or possibly somewhere else in the near east) in the 1930s?

A group of kittens is called a KINDLE.

Glad you are having fun in the big city!!!

Ooh, you guys, such fun facts!

I like this excerpt. When is the book coming out?
I know lots of random facts. Unfortunately right now I am so tired I can’t retrieve any of them. As soon as my head hits the pillow, I’ll probably think of dozens of them.

Thanks, librarypat! I have to finish the book first, then the agent has to shop it, then–suffice it to say, it’ll be awhile, if it comes out at all.