The Riskies love a great debut, and today we welcome Elyse Mady! Her book, appropriately titled The Debutante’s Dilemma, is out with Carina Press. For more information, visit her website here, and comment for a chance to win a copy on today’s blog!

Welcome to the blog, Elyse! Tell us about The Debutante’s Dilemma…

I’m so happy to be here! The Debutante’s Dilemma is a Regency tale that tells about the romantic awakening of Miss Cecilia Hastings, the non-pareil of the London Season in 1814. She’s come up the winner in the sweepstakes known as the marriage mart and when the story opens she is on the cusp of receiving not one, but two, marriage proposals, from Jeremy, the Earl of Henley, and Richard, the Duke of Wexford.

They’re fabulously wealthy, handsome, titled, and brave. There’s just one little snag in this lovely scenario and that is that Cecilia wants passion in her marriage, not just tepid liking, and both her suitors have yet to convince her of their true feelings.

This dilemma compels her to issue the unorthodox challenge to her two suitors: a kiss before she will entertain their proposals. She knows herself well enough to know that she couldn’t bear to be stymied or constrained by a polite agreement like so many others of her acquaintance seem to endure. This is a story about people confronting the unspoken expectations that surround all of us every day and making a bold grasp for their happiness. I won’t give away the ending, but neither Cecilia nor Henley or Wexford expect anything like what comes of their encounter, I promise you that!

This is your debut, right? How did you get started writing?

Yes, indeedy. The Debutante’s Dilemma is my own debut and I’m totally excited to finally see my name in print. Possibly, the only person more jazzed about it is my mother , because that’s what mothers do! She manages to bring it up in conversation with everyone she encounters and at the rate she’s going, I may have to nail down some sort of referral fee in light of her efforts–maternal PR is frightening effective!

I got my start in writing (at least the paid kind!) about three years ago, publishing articles in magazines. It was really good training. I learned to promote myself, summarize and organize ideas, get familiar with contracts and negotiation, albeit on a much smaller scale than in book publishing, plus gain some real writing creds to tack on to the bottom of my slush pile letters. I also mastered writing to a deadline, writing in a variety of different voices and styles and working with editors, all skills that have stood me in very good stead since I’ve sold to Carina Press.

Did you come across any interesting research for this story?

Always! Research is one of my happy places. Give me a shelf full of obscure historical material and I’m as happy as a bi-valve mollusk. :))

A lot of the story’s climax takes place in a greenhouse and when I first sketched out the scene, I automatically pictured a big, white, glass walled conservatory type building–the epitome of the English gardening mania. I’d even played with the idea of reflections against the darkened glass as part of the seduction. 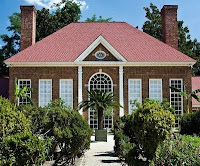 Then I discovered that all those all-glass buildings were a Victorian and Edwardian convention and that greenhouses in the 18th and early 19th century looked very different. They didn’t have the expensive glazings and iron frameworks. Instead they were often made of brick, with large, multi-paned windows, opaque roofs, and skylights for ventilation. Depending on what was being grown in them, the time of year they were being used and what kind of climate they were built in, they could have a lot of different floor surfaces too, from exposed earth to gravel to pavers to plants grown in individual tubs.

Luckily my characters were happy to oblige the about-face and none of them seemed put-off by the new details of their romantic space!

We always have to ask–what is “risky” about this book?

Oooh, lots of things! But it can all be summed up in one risky word–threesome…

I’m a busy bee. I’ve had 2 contemporary romances accepted by Carina and they should be hitting e-bookshelves at some point in 2011. I’ll have all the details on my blog as soon as they’re available.

I’m also working on on some more Regency stories that I’m really excited about! I’m currently shaping the outlines for one, possibly two, more novellas that link to the characters in The Debutante’s Dilemma. Cecilia’s cousin Georgiana will definitely be one of them, and if my plans for them hold up they’re definitely going to be interesting–in the naughtiest sense of the word!

Then I’m also working on a full-length historical novel which has no title at present because titles are not my forte. It’s another Regency, but it’s a significant departure for me–a fusion of sorts between historical fiction and romance that I’m really excited about. I’ve left behind the ballrooms and salons I explored in this current release and am moving into the less vaunted but still fascinating (to me at least!) spheres of everyday Londoners during the period. Many of the characters and events are matters of historical record and bringing them to life, filling in the many unknowns yet keeping true to the period and shaping a compelling story is a really interesting challenge for me as a writer. There are mass arrests and bribes, gaol fever and riots, and all sorts of legal skullduggery, leavened with a big heaping dose of romance!

And I’d love to say thanks for having me at the Riskies today by offering one poster the chance of winning a digital copy of The Debutante’s Dilemma in their choice of e-book format!

Well, it may not be “historically accurate” but I love a feisty heroine who knows what she wants and goes after it.

Congratulations on the debut and having the best PR machine around–the mother! We are very lucky to have them…that is what mine tells me!

I love that you’re not afraid to cross genres! Kudos to you!

The hook for THE DEBUTANTE’S DILEMMA sounds delicious! It’s definitely on my radar.

I love the sound of this story, Elyse. Congratulations!

The cover rocks! Congrats on your debut!!!

Congrats on your debut Elyse, and the best of luck to you. The Debutante’s Dilemma sounds like a wonderful story and I’m looking forward to reading it.

I’d have assumed huge glass panes for the conservatory, too. A great story to pull out when soomeone questions that you’re indulging…uh, doing yet more research (speaking as one research fiend to another).

Adding my congratulations to the pile, Elyse!

It sounds like a delicious book–and that you have so much coming, that is so cool, too! Your mom is going to have a field day with your PR!

A belated welcome to the Riskies, Elyse! The Debutante’s Dilemma and all your projects sound great!

How nice that your mother is so good at promotion!

Sounds like a very risky debut. Funny how we get an image in our minds (the victorian style greenhouse) and don’t really consider time frame. A good thing you did your homework. It is a good thing you enjoy research. Not everyone does and, to me, accuracy is important in historical fiction.

Good luck with the release of THE DEBUTANTE’S DILEMMA and with your future projects.

Thanks, ladies! I loved being an honourary Risky 🙂 And I can’t wait to see who wins a copy of the book – the winner will get to see if I got my greenhouse research correct, among other things 😉