I’m still on deadline and I am so looking forward to getting this book finished! In December I’m going to play … many Jane Austen activities of course since her birthday is on December 16 (and yes, we’ll be celebrating here too!). 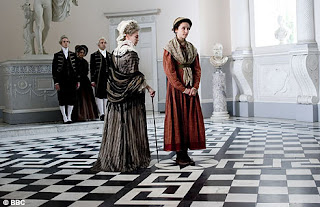 But I have been doing a few other things that I wanted to share with you. First, I’m reading My Lady Ludlow by Mrs. Gaskell, one of her shorter and neglected novels, part of which was used to flesh out the wonderful BBC Cranford. It’s set in the first few years of the nineteenth century and is a wonderful series of snapshots of country life (Mrs. Gaskell was born in 1810 so I like to imagine she’s gathering together everything she’s heard about the good old days). Some of it is surprising. First, here’s a description of a gown and a use of pocket holes (slits to accommodate the pockets, discrete items which hung inside from the petticoat) I’ve never heard before:

She had a fine Indian muslin shawl folded over her shoulders and across her chest and an apron of the same; a black silk mode gown made with short sleeves and ruffles, and with the tail thereof pulled through the pocket-hole, so as to shorten it to a useful length: beneath it she wore, as I could plainly see, a quilted lavender satin petticoat.

Or how about this? Have you ever heard of this particular fashion craze?

Nor would my lady sanction the fashion of the day, which, at the beginning of this century, made all the fine ladies take to making shoes. She said that such work was a consequence of the French Revolution, which had done much to annihilate all distinctions of rank and class, and hence it was that she saw young ladies of birth and breeding handling lasts, and awls, and dirty cobbling-wax, like shoe-makers’ daughters.

She’s very much old school, absolutely opposed to anything that will upset the social order–and this is a decade after the Reign of Terror, so she was probably fairly representative. Here’s a description of her hiring a servant, which gives a really fascinating insight into master/servant relationships:

… Then she would bid her say the Lord’s Prayer and the Creed. Then she inquired if she could write. If she could, and she had liked all that had gone before, her face sank–it was a great disappointment for it was an all but inviolable rule with her never to engage a servant who could write. But I have know her ladyship break through it, although in both cases in which she did so she put the girl’s principles to a further and unusual test in asking her to repeat the Ten Commandments. One pert young woman–and yet I was sorry for her too, only she afterwards married a rich draper in Shrewsbury–who had got through her trials pretty tolerably, considering she could write, spoilt al, by saying glibly, at the end of the last Commandment, “An’t please your ladyship, I can cast accounts.”

“Go away, wench,” said my lady in a hurry, “you’re only fit for trade; you will not suit me for a servant.”

I’ve been enjoying the documentary series Circus on PBS–enjoying in the sense that I’ve seen snippets of them–really fascinating stuff. When I’m less busy I hope to catch them all.

And I’ve also started a singing group in my town, which is a wonderful, exciting project. Our lineup so far is five altos and one bass-baritone which is a bit limiting, but we have plans to go hunt down men (particularly tenors). This too was inspired by a British TV series, The Choir, in which a choirmaster, Gareth Malone, went into unlikely environments full of people who claimed they “can’t sing” and got them singing, enjoying it, and performing.

What are you doing for fun these days? Have you seen either of these TV shows? What’s your favorite Mrs. Gaskell?

How exciting, Janet, that you are starting a singing group! What fun.

I recently downloaded a bunch of Mrs. Gaskell’s books onto my Kindle and I started reading one of them, Ruth but I got distracted by other books. Must get back to them.

I have a couple of Gaskell novels on my new Kindle. Previously, I’ve only read her bio of Charlotte Bronte.

So far as choir goes, we’re working on the 1610 Monteverdi Vespers for an early December performance.

I am SO glad to hear the pert miss who could cast accounts married a wealthy draper!

I’m loving the PBS Circus series too. I’ve been working on a circus-set series since 2006, and I was relieved to see the research I’d done was accurate. The circus is such a world unto itself.

I find Mrs. Gaskell’s industrial novels, including Ruth and North and South difficult to take–I feel such a sense of discomfort in her well-meaning depiction of working class characters. I love Wives and Daughters, tho, which also had a terrific BBC adaptation from a few years ago.

I love the Monteverdi Vespers, Victoria! Not quite our level, yet.

Jane, I thought of you when watching the BBC Circus series!

It is so cool that you are starting a choir. Not enough people sing. We always have in my family with the result that one of my kids was teased at elementary school for singing out. It was more the thing to pout and lip-synch. So sad!

I would have to say my favorite Gaskell is Wives and Daughters. I do love North and South, but it has its down side. I haven’t seen the BBC production. Will have to look for it.

How neat that you are starting a singing group! Usually it is the lower voices you have to go searching for!

As someone who started studying music at the age of nine and who has been singing most of my life, both as an amateur and as a pro there really is something of the divine in a group of people getting together to make music with their voices.

This time of year my mind turns to Handel’s Messiah. I made Christmas money many a year as a graduate student performing the soprano solos with choirs of every sort – community choruses, professional choruses and orchestra and tiny church choirs. His music speaks to music lovers of all capabilities.

Afraid I have not read any Gaskell books. Will have to look for them. Those little tidbits of daily life are one of the reasons I read historical fiction.
Have caught several episodes of CIRCUS. It has been interesting. Gives interesting insight into the “business” and just how it works.
Hope you get your free time soon.

with the tail thereof pulled through the pocket-hole, so as to shorten it to a useful length

This is very common in the 18th century. The gown was retroussee dans les pouches. You can see an example of the here (the stripes you see are the lining of the skirt):