Risky Regencies welcomes another debut author this weekend, Grace Elliott, who will tell us more about her release A Dead Man’s Debt! One commenter will win a copy… 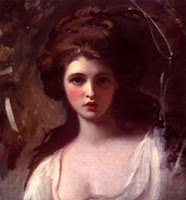 Hello, Riskies, what a pleasure to be here today to share a little about my debut novel, A Dead Man’s Debt, and the inspiration behind the story. Believe it or not, a painting of the young Emma Hart (who married Lord Hamilton and was Horatio Nelson’s mistress) was the catalyst behind my novel. The painting by George Romney shows an innocent yet lush young woman, scantily clad with a hint of bosom, brazenly staring out of the canvas with an allure that is quite hypnotic. It struck me as sensational for an 18th century work, that the sitter was not prim, proper, straight-backed and starchy. It must have been scandalous at the time. But who would be bold enough to commission such a portrait? (As it happened Emma was ahead of her time and loved to flout convention–but that’s another story!)

What a delicious idea for a story! What if the woman in the painting wanted to shock? What if, years later, this rebellious streak threatened to disgrace her family? What if only the son she despises can save her reputation–but at the price of his secret love? Thus the stage was set for a story of blackmail, sacrifice, and redeeming love. This excerpt from A Dead Man’s Debt shows the young Lady Sophia Cadnum revealing the shocking portrait of her friend:
With a swoosh the drape hissed to the ground. Georgiana’s eyes widened, and she flushed crimson as a hand covered her mouth. “Oh my!” The oil showed Sophia Cadnum stripped of her satins and silks with her natural beauty shining like an exotic flower. In just a gossamer shift, with a rope of pearls wound round a swan-like neck, she reclined in a woodland clearing, happy as a nymph. Ringlets of rich raven hair, unpowdered and unrestrained, tumbling over her shoulder to provide a modesty not offered by the transparent gown. On closer inspection, the male viewer would be enchanted to discover the ghost of a nipple peeping between ringlets. Sophia smiled happily. “Isn’t it wonderful?” Georgiana grew quiet, nervously averting her eyes. “I speak as your dear friend and only with your interests at heart, but is it quite…” she glanced at Sophia then steeled herself. “…appropriate?” Black thunder darkened Sophia’s pretty face. “And by that you mean?” Georgiana took a deep breath. “Well, what with your being a mother now, something less…provocative…might be more correct?” Sophia scowled. “But that’s precisely the point. Producing a son was my duty…and I won’t be made into a dowdy matron because of it. I need to feel alive and have my heart race for joy. Heaven knows already the Duke talks of producing another brat for the nursery.” Comprehension dawning, Georgiana gulped. “Was it so very awful giving birth?” Sophia closed her eyes. “Hateful, from start to finish.” Silence stilled the air. Georgiana cleared her throat. “Has the Duke seen the painting?” “In truth I don’t think he cares enough to have an opinion. As long as I serve my purpose as mother to his heirs, he won’t object.” She stroked her tightly laced stomacher, resting a hand on the barely perceptible dome of her belly. The light went from her eyes as she whispered, “Please God grant me respite from my duty.”

Like ripples on a pond, the consequences of this scandalous portrait are felt years later, when Lady Cadnum’s offspring are all grown up. It is resentment over the children she bore that expresses itself in her son Ranulf’s sullen moods and coolness. But being a Regency romance, the latter is like a red rag to a bull for our heroine, Celeste Armitage, who is determined to break through Ranulf’s reserve and uncover the passionate man beneath.

And all this from one portrait of Emma Hart! Phew—I’m saving my energy for a trip to the National Portrait Gallery in London, heaven only knows what inspiration will strike there…

About the Author: Grace Elliott leads a double life as a veterinarian by day and author of sensual historic romance by night, and firmly believes that intelligent people need to read romance as an antidote to the modern world.

A Dead Man’s Debt is available from most ebook retailers and on Amazon Kindle, and at the publisher’s site. If you’d like to read more excerpts or learn more about what makes Grace Elliott tick, please visit her website

Wow, veterinarian by day and hot historical author by night! That is quite a combo! I have a great deal of admiration for veterinarians and my vet admires me a great deal as I feel certain I have sent at least one of his children through college with my patronage!

And I do love your inspiration for this story. I LOVE a what if drawn from such a provocative portrait. And the idea of a woman’s children having to suffer the consequences of her girlish rebellion intrigues me.

Have you had other inspirations such as this evoke such a great response in you?

I can’t wait to read this one! As an art historian, I’m always pleased to see an artwork playing a key role in the narrative. Congrats on the novel!!

I have to say I also love it when art plays a big part in a story! 🙂 And I admire vets as well, since they keep my pets so healthy…

Thanks for being here today, Grace!

Welcome to the Riskies, Grace!

I love that portrait of Emma Hamilton. I think there is also an innocence there, as well as the sensuality.

There must be something in the water! My Gallant Officer, Forbidden Lady also features a heroine who wants to shock with a portrait…and the hero is the portrait painter.

We must be on the same cosmic wavelength!!

The portrait of Emma Hamilton is quite sensational. It seems to me that either she was truly fascinating, or the portrait artist was in love with her, and possibly both.

Grace, I’m so excited to see this portrait. I have been working on an art show (for my portfolio since I would one day like to run an art museum and have been taking steps toward that goal) and I want to call it “My Lady Scandalous”. It will be paintings of women that are scandalous during their time, but not ours. I don’t want too many full on nudes though. So this portrait is wonderful.

It also makes me think I might add it to another show I’m working on for my portfolio this one entitled “I Learned To Dance From Renoir”. It’s a series of paintings that I always wanted to know the back story to so I have written the back story in the form of a poem. Or at least my back story. I can see this portrait in that collection too since I’d love to know more. As a side note and I’ll make it in my portfolio, if either of these shows ever happens I will have to make sure your book is available in the museum. I’m not promising anything because I have three more years of museum administration to finish in school, but I love this idea and can’t wait to read the book.

PS I’m Jane Austen on here normally but for now I’m posting as Rachel….let you get to know the real me so to say.

PS I just love your name….Grace Elliott…it sounds like a Regency name to me.

What a shame when the children pay for the dislike of the father. This sounds like it will be an interesting and enjoyable exploration of those consequences.
You have two jobs that I am sure give you satisfaction.