A few weeks ago, I finally got around to watching a film I’ve meant to see for ages, Visconti’s Il Gatopardo (The Leopard). It’s an epic from 1963, with Burt Lancaster (dubbed in Italian!) as the patriarch of a great, aristocratic Sicilian family on the cusp of massive changes in the mid-19th century. It was gorgeous, and I couldn’t believe I waited so long to see it!

The last scene was my favorite, a 45-minute ballroom set-piece full of Verdi and swirling gowns, which manages to look fabulously authentic, draw the viewer deep into that world, and still be a meditation on mortality and change, youth and age. It’s so full of emotions that simmer just beneath the sparkling surface. Writing historical romance means writing lots of ballroom scenes, of course, and they’re some of my favorites to work on. So much can happen in a dance, so much that has to be hidden or that bursts out suddenly with vast consequences. It can mean so much in a story. And this scene in The Leopard was very inspiring.

It also made me think of other dance scenes I love in movies, especially with the holiday parties looming! I did a little informal polling on Facebook and Twitter, asking people’s favorite dance scenes. I heard about Rogers and Astaire (I especially love the “dancing in the gazebo while it rains” scene!), Gene Kelly dancing in the rain, Dirty Dancing (also a guilty pleasure of mine, I confess), and lots of Pride and Prejudice. It seems like every Austen adaptation has a dance scene (or two or three), including the most recent Emma, where Emma leaped around and shrieked like she was at a rugby match! 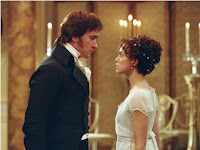 I’m partial to the Netherfield ball in the 2005 P&P, where the room slowly vanishes around Elizabeth and Darcy as they dance and stare smolderingly. I like The Age of Innocence, where the camera rises up from Newland and May to show the swirling characters on the polished floor while Strauss plays. The coronation ball in Young Victoria (I seriously covet her gown), the volta in Shakespeare in Love, the tango in The Mask of Zorro, Audrey Hepburn and Humphrey Bogart in the empty tennis court in Sabrina, the meet-cute at the Bath assembly rooms in Northanger Abbey. The cell-block tango in Chicago. And who could forget “Other way, Mr. Collins!”??

Now that I think about it, there are lots of dance scenes I love. What are your favorite movie dance scenes? Do you like reading/writing ballroom scenes?

And don’t forget, I’ll be back here this Sunday, along with Nicola Cornick, as we launch our December releases (and give away copies!), and I’ll be at the Word Wenches on the 24th. For more info on various blog appearances, excerpts, and a December contest, be sure and visit my Laurel site…

Aloha! And mahalo for taking us down memory lane with the wonderful dance scenes – the costumes and music made those movies so special!

Laurel, I love the 2005 P&P dance scene. Smoldering indeed. Must dig up the latest Emma. Haven’t seen that one yet. What year was it made and by whom?

I enjoy reading dance scenes. I find when I write them, I have to do many passes through in order to interweave all the movements and dialogue, the emotion and the body language. Having done some English country dancing, I now realize how impossible it would be to have a continuous conversation. I think the movies illustrate that well.

My verification word today is “scensubl”. I wonder how it fits. Perhaps when dancing one should wear “scensubl” shoes?

Elena, I definitely recommend this movie! It’s a long one, but I was totally engrossed in it. It felt like actually being right there at that ball…

Daz, that “Emma” came out from the BBC last year (I think–maybe it was this year), Romola Garai played Emma. It was a very mixed bag for me, I liked some things a lot and hated some, but it’s definitely worth watching! (I’d love to see “Mansfield Park” get the same miniseries treatment, I think maybe it’s the only way to do justice to it)

And I’d love to be able to practice more Regency dancing in real life! The only time I seem to have the chance is once a year at the Beau Monde Soiree. I took some Renaissance dance classes a few years ago, and found out just how hard it is to leap and twirl like that in farthingales and bum rolls 🙂

Fred Astaire and Ginger Rogers dancing to Cheek To Cheek in Top Hat. She wears that beautiful feather dress.

Anything with Fred and Ginger should be must-see as far as I’m concerned! SIGH!

I adored the dance scene in the 2005 P&P. Absolutely scintillating.

I also enjoyed the scene in Young Victoria where Albert is learning to waltz. “To the window” “To the wall” Something very sweet about a guy learning to dance to woo the woman he loves.

Does anyone remember the dance scene in The Man in the Iron Mask where the Musketeers are messing with King Louis’s head (played by Leo DiCaprio)?

And in the spirit of the season I am reminded of the scene at Fred’s house toward the end of A Christmas Carol when Scrooge dances with his nephew’s wife. (This is in the original Alistair Sims version.) He dances a polka in the parlor with her that just makes me smile.

Recently, I watched Becoming Jane again. I love the dance scene where Jane’s going through the motions with her soon-to-be fiance, and then her hand touches LeFroy’s. As I recall, their hands are the only thing on screen until they step into their hold. Everything changes. Jane’s smile, the music. Everything. It’s a beautiful moment.

Loved all those musical films in the 50’s with the great music and great dance scenes. Dirty Dancing is also one of my guilty pleasures..watch it whenever I can. But I think one of my favorite dance scenes is in Gone with the Wind at the Confederate Fund Raiser where Scarlett, widowed for the first time, is not suppose to dance. But when the music starts, the camera shows her leaning on the booth counter with her feet dancing away and her bouncing bottom!

And speaking of verification words, mine is ‘uppyth’…sort of like Scarlett’s bouncing bottom! LOL