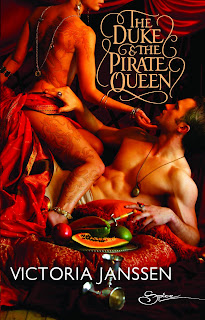 I’m thrilled to welcome Victoria Janssen to the Riskies to talk about her latest release (and isn’t that a super hot cover?). Not quite a Regency writer, Victoria has created her own world, and here is how she “researches” it.

Over to you, Victoria …

The Duke and the Pirate Queen is set in the same world as The Duchess, Her Maid, The Groom & Their Lover and features characters who appeared in that novel, Duke Maxime and Captain Imena Leung. Captain Leung is forced to abduct Duke Maxime, who is her employer, to thwart an assassination plot against him. He wants her. She wants him. Unfortunately, issues of birth, rank, and their own pasts are in conflict with their desires. And then there are the pirates, the storm, the hostile islanders…not to mention the sharks.

The Duke and the Pirate Queen isn’t a historical. However, it is set in a fantasy world, and I’ve often noted that my approach to creating a fantasy world is very similar to the way I research to write a historical novel. The difference is in the variety of sources I feed into my brain. My subconscious, which I call my “backbrain,” assimilates all the information and, hopefully, leaves me with an idea of a world that holds together like a “real” world. My theory is that my own “voice,” as it were, imposes a kind of internal consistency on the ideas I choose to include.

I use history as a guide. Most of the countries in The Duke and the Pirate Queen are loosely based on one culture or another, sometimes with elements from different time periods depending on the thematic needs of the scenes I’ve set there. The Duke Maxime’s duchy, for example, is essentially a Mediterranean setting. Captain Imena Leung comes from an empire similar to fifteenth century China that is plagued by ninth century-style Japanese pirates.

Another important research source for The Duke and The Pirate Queen was its predecessor, The Duchess, Her Maid, The Groom & Their Lover. I carefully went through my manuscript file and copied out all descriptions of the characters I planned to use again as well as all the descriptions of Maxime’s palace. I kept those bits of text on hand while writing new scenes set in Maxime’s duchy, to ensure internal consistency between the two novels.

For the main ship featured in the novel, Seaflower, I relied on a wide range of research material, most of it relating to ships used in the Napoleonic Wars, some to modern sailing ships. This was partly because I already had an interest in that period, and there are plenty of resources; but also as an homage to the sea adventure novels of Patrick O’Brian and C.S. Forrester, which influenced several events that take place in the story. I returned to O’Brian’s novels themselves to put a little more life into my understanding of sailing ships.

Finally, most of the plot turns on long-distance trade. When I first conceived the novel, I had not yet figured this out. The idea came later, from my pleasure reading; or rather, reading I knew might be useful to the story, except I pretended it wouldn’t, so I could pretend it was for pleasure!

Dangerous Tastes: The Story of Spices by Andrew Dalby and Sweets: A History of Candy by Tim Richardson added immeasurably to the “feel” of a world newly discovering trans-oceanic trade: “Whole pears, glittering with an armor of sugar crystals, spilled from a brightly polished silver bowl, and a mixture of saffron pastilles and candied violets adorned a perfect marzipan replica of the king’s castle.”

Those two books also provided me with an important character motivation, which I won’t reveal here. If I hadn’t been reading “outside” books, the novel would have been much poorer for it.

The final research source I used might not really count as research. I think of it as mining my own brain. All the research I’ve done before is in my brain, somewhere. When writing a fantasy novel, bits and pieces I may not even consciously remember rise to the surface and fill in gaps with my own voice.

Nothing I read is ever wasted.

Victoria will give away a signed copy of her book, so please tell us what you think of fantasy vs. historical, and what, as reader or writer, makes a fictional world comes alive for you.

Thanks for having me to visit at one of my favorite blogs!

Welcome, Victoria. It is a pleasure to have you as our guest.

How intriguing to create a fantasy, historical world. I can see how that can give you freedom, but also a whole new set of challenges.

Was it difficult to sell this fantasy concept?

Luckily for me, this novel was set in the same universe as the first novel I’d sold to Spice, so they were open to the concept of a fantasy world.

I did see some reviews of the first book that assumed it was a historical, even though I thought the fantasy element was clear.

Victoria, I love your worlds. Fantasy can sometimes be a little TOO over the top “pretend,” whereas historical can sometimes be too “real”. I’ve found I enjoy a good blend of the two and gravitate more toward “historical fantasy” and “paranormal historical” than toward straight fantasy or straight historical.

I’m so looking forward to 12/18, when I’ll be finished with finals and on my way into a reading binge. You’re on the pile. 🙂

Great post! I rather like books that are so settled in their universe, so to speak, that one might mistake it for a real historical! Perhaps frustrating to the author when a reader makes that mistake, but promising to me! 😉

I wonder how much ‘behind-the-scenes’ world-building happens for books like this – and if that’s partially why a series develops – either because so much time was invested in creating the fantasy world or if it’s just become so fascinating it begs to be revisited?

Thanks to Ms Janssen for the interesting post and the giveaway!

I think the lines between what is fantasy and what is historical are so blurry, anyway, since what we imagine is historical is colored by our own ‘backbrains,’ as you say, and is likely very different from the reality. I like the idea of cobbling together the intriguing parts you found in your research, and your book sounds like so much fun!

Victoria’s stories look different and unique. I think both fantasy and historical stories need a lot of detail to come alive for me. It must be fun to be able to create your own world.

When people mention “fantasy historical”, the first thing that occurs to me is steampunk. Still, as long as the fantasy isn’t too far out of the realm of possibility (unless it’s explained), it’s fine by me. After all, I like to imagine the historical heroes and heroines having access to soap and hot water for bathing more than once a week. 🙂

As historical and fantasy/paranormal are my two favorite genres this sounds right up my alley!

What is the hardest part of creating your own world with its own history, culture, etc?

AND THE WINNER IS (thanks to random.org):

I’ll email you today to get your address.

Thanks for commenting, everyone!

Emily, I, too, have big love for historical fantasy; it’s possibly my favorite genre.

Audra, I definitely prefer when I can spend a lot of time with the worldbuilding, maybe not overtly by making notes but organically, letting thoughts come together.

Louisa, the hardest part for me of worldbuilding is knowing that my imaginary world can never be as complex as a real one.