I have a terrible confession to make. I am Amanda, and I am an avid royal watcher. Yes, there it is, terrible but true. I think it all started when I was a preschooler, and got up in the middle of the night to sit on the couch with my mother and watch Princess Diana’s wedding. I insisted on wearing my ballet recital tiara and a bedsheet tied around my waist for a train for days after, and I guess I never totally got over it. The best Christmas gift I ever received came that year, when my aunt bought me a porcelain Diana doll complete with massive train (which I still have). I buy British tabloids whenever possible just to read about them. And the thought of a royal wedding coming up soon fills me with guilty glee, and I have a secret longing to go to London this spring just to sit on the sidewalk with thousands of other people and watch the procession go by. (See “Kate Middleton will be sixth Queen Katherine”)

Now you know my secret. So I thought we could take a brief look at some of those other Queen Katherines and their weddings (and a few Charlottes and Victorias as well…)

Catherine of Aragon married Prince Arthur of England on November 14, 1501 (having been already married by proxy in 1499!). This was a sort of affirmation for those upstart Tudors, landing a Spanish infanta for a bride, and they did it up big-time for the 15-year-old couple. The wedding was at St. Paul’s Cathedral, presided over by the Archbishop of Canterbury and witnessed by dozens of courtiers (and hundreds of commoners lined up on the procession route outside). The bride wore a white gown embroidered with silver thread, pearls, and diamonds, with her auburn hair loose to her knees and a Spanish lace veil. She was escorted up the aisle by her 10-year-old brother-in-law Henry. The celebrations went on for two weeks of jousting, balls, and masques, and then the couple (consumated or not? Who knows…) were packed off to damp Wales. Arthur died 6 months later. When Catherine went on to marry Henry, it was a quiet and private affair. In fact, all Henry’s weddings were quiet–some were even totally secret.

Catherine’s daughter Mary I married Philip of Spain in another lavish ceremony, this one at Winchester Cathedral on July 25, 1554. There were thousands of guests packed into the church to witness the ceremony, conducted by Bishop of Winchester Stephen Gardiner. The cathedral was hung with gold and crimson cloth, and everyone was dressed in their most lavish fashions despite the rain outside. Philip wore white and gold; Mary wore a purple and gold gown, “rich tissue with a border and wide sleeves, embroidered upon purple satin, set with pearls.” An immense banquet followed at the Bishop’s palace. (Here is a reproduction of her gown, as well as the chair she used for the ceremony, both seen at Winchester Cathedral. I actually quite like that dress!): 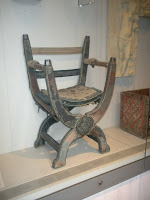 Charles II married Catherine of Braganza three times. The first was by proxy in April 1662, followed on her arrival at Portsmouth by a secret Catholic ceremony and a public Protestant one, presided over by the Bishop of London on May 21. It was a cozy affair, with a few privileged courtiers to witness it. The bride wore a rose-pink gown sewn with blue love knots, which were then cut off and passed out as favors. She was deemed quite dowdy by the fancy Court ladies, but the groom wrote to his sister, “I think myself very happy, for I am confident our two humors will agree very well together.” This is a medal struck for the occasion of their marriage: 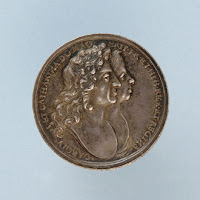 George III married Queen Charlotte only a few hours after her arrival in England, when she was bundled into a lavish white and gold Court gown and mounds of jewels and carted off to the Chapel Royal at St. James Palace for the wedding on September 8, 1761. Despite this abrupt beginning, the marriage was a harmonious one (despite the madness and all that). The same could not be said of their son, George, the Prince Regent.

His wedding to Caroline of Brunswick on April 8, 1795 was famous for the deep inebriation of the groom. Like his parents, the wedding was at the Chapel Royal. It was attended by dozens of snickering courtiers, presided over by the (presumably taken aback) Archbishop of Canterbury, and the bride wore a gown of silver tissue and lace with a train of ermine-lined velvet so heavy she could hardly walk. Somehow they managed to beget a child within the next few days, and that was the end of that. 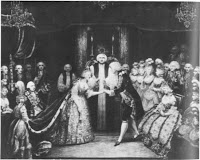 That unfortunate child, Princess Charlotte, grew up to marry Prince Leopold on May 2, 1816 at Carlton House in front of 50 guests. Despite the small size of the wedding, it was a lavish one. The bride’s dress of silver lame on net embroidered with silver shells and flowers and trimmed with Brussels lace, was said to cost 10,000 pounds! It still exists today.

Queen Victoria was really the one who started all the stuff we consider to be “wedding-y” today. White dresses, veils, flowers, bridesmaids, etc. She married Prince Albert at the Chapel Royal on a rainy February 10, 1840, with crowds of people lining the route to see the royal procession. She had 12 bridesmaids to carry her train, and a gown of white satin trimmed with lace, a lace veil held by a wreath of orange blossoms, satin slippers, and a sapphire brooch given to her by her groom. (the lace was said to have cost over 1000 pounds! The veil was later worn by her youngest daughter Princess Beatrice, and Queen Victoria was buried in it). The wedding breakfast was at Buckingham Palace, after which the couple dashed off to honeymoon at Windsor. The honeymoon must have been a great success, for Princess Vicky came along 9 months later! Her wedding to the Crown Prince of Germany was also hugely lavish… 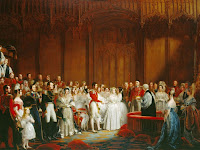 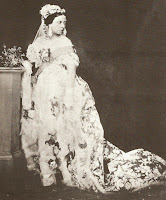 And that’s only a tiny taste of royal weddings! What is your favorite historical wedding? Are you looking forward to the next royal wedding like I am??

I’m thinking of having a royal wedding party …. when is it supposed to happen?

Don’t stress Amanda, I’m one too. I can’t wait for the royal wedding and it’s a double bonus for me because they’re marrying on my birthday. Great post!
Tam đź™‚

I love that they are marrying and hope for the best for them. I, too, will be glued to the TV and wish I could be in the crowd with you waving a little UK flag.

My parents were in London right before Diana and Charles were married so I have a souvenir from that trip.

You must have been a very cute little girl, Amanda!!

Leanne, it will be on April 29! (and hopefully not too cold and rainy). I am so anxious to see what the dress will look like!

Diane, maybe we should hold a virtual, online party! We can all wear our tiaras and wave out flags. đź™‚

I can’t wait for this wedding. I will be up at the crack of dawn watching this on TV, will probably buy all the wedding books, as well at least one piece of china! I was lucky enough to spend my first summer in England when Prince Charles and Lady Diana were married, and I’ve had royal wedding fever ever since!

Let’s hope that 29 April is an auspicious day for William and Kate. It is already Duke Ellington and my husband’s birthday, and from Tamara’s post it is her birthday too, so that may be a good sign.

I’m eager to see what dress Kate will pick. Diana developed a marvelous clothes sense as she matured, but she was married soon after turning 20, and her wedding gown — with its huge train and ruffles — definitely seems like the choice of a very young woman. Kate is a bit older and I would imagine her choice will be traditional but a bit more sophisticated.

Elizabeth, I’m also sure I will buy at least one souvenir piece of china! But so far the ones I’ve seen look a bit–hastily done đź™‚

Susan/DC, I’m sure Kate’s gown will be lovely! She’s lucky it’s no longer the early ’80s with crazy-big fashions, LOL.

Like it was a big secret you love royal weddings, chica!

I am not a big royal wedding fan, but I am happy there is hoopla for you.

I liked Fergie’s wedding gown a lot more than Diana’s, and I hope Kate’s is more like that!

“Like it was a big secret you love royal weddings, chica!”

My favorite royal wedding gown of all is actually Princess Margaret’s (a great look at it can be found here: http://orderofsplendor.blogspot.com/2010/06/top-10-best-royal-wedding-dresses-6-hrh.html)

An online wedding party sounds great. I definitely want to be sitting front and center for this wedding. If not in England then in front of a television!

I guess Charles and Di’s wedding is still my favorite. What came after has tarnished it a bit, but I do remember being enchanted by the splendor of the wedding and all the falderal. My Mom has a number of souvenirs from that wedding sent to her by the ladies of the village where we lived. They used to gather at our front garden gate every morning and drink tea and gossip. Now that gate is the internet and is as if nothing has changed in the past forty years since we left England.

I think I’ll wait a while to buy some of the wedding china. For the money it will cost I would like for it to at least look tasteful!

I don’t really have a favorite. It is just interesting to learn about them. I will probably watch bits and pieces on TV. I should be able to watch more than I did last time. I do hope their marriage is a long and happy one.

Lovely post, with some much info. I like the brown wedding dress too, very unusal colour, but elegant.

Love your blog! Thought you may be interested in a site I’m curating on the upcoming royal nuptials:
http://curationstation.com/page/the-royal-wedding
Enjoy!
Lisa

Mine is probably Princess Di’s because I was alive…

When I was a teenager, I used to paw through a coffee book about her wedding over and over again. I was a tomboy. It freaked out my cousins a little bit. Mainly cuz I was not into clothes, or anything and there I was oohing and aaahing over a wedding dress.