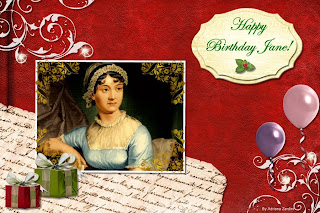 Some things on my mind today, mainly that I should be writing, but I’ve spent most of the day so far running around and buying xmas gift wrap (no presents as yet but it’s a start) and in a little while I’ll be going out to rake leaves, my last chance before the town picks them up tomorrow.

First, some news–Mr Bishop and the Actress is coming out early, in February 2011, and is available for preorder at bookdepository.com (free shipping worldwide). And if you’re on my mailing list you’ll see the cover early and get word of the next contest (a twinkle in my eye at the moment–sign up on my website).

A week today is a very special day, the birthday of Jane Austen, born December 16, 1775, which we’re celebrating all week. On the day itself a whole bunch of blogs, including the Riskies, will have a party, offering, naturally, valuable prizes. In fact our party begins on Monday and runs all week, but on The Day itself, next Thursday, we’re participating in a group blog party.

Masterminded by Maria Grazi (who designed the wonderful graphic) at My Jane Austen Book Club, the following gracious hostesses will be blogging about Austen on December 16:

The following prizes will be offered:

I’ll link back to this post on The Day so you know who to visit. You don’t have to buy Miss Austen a present, you don’t have to dress up–just plan to have some blogging fun!

In the meantime, let’s talk about our holiday preparations–how are they going or are you pretending it’s just not going to happen?

I’ve decided to procrastinate as long as possible. In my family I find that all is forgiven as long as I get all the baking and cooking done.

After all they all know that somehow the Christmas decorations will be put up and there will be at least a token under the trees and I’ll definately pick up a book for each of them. With those obligations (mostly) taken care of at long is the table is covered with food and the counters filled with cookies, cakes and pies all will be happy in our humble abode.

The amazing thing is, I have done something. I ordered gifts for those people who are far away and I even did it in time so I don’t have to use express shipping. I also have gifts for my critique partners, because we are exchanging them on Sunday.

Not a lick of decorating yet, though….

We got the tree up on the Sunday after Thanksgiving, and all the presents have at least been ordered. I still need to ship my CP’s presents and get some stocking-stuffers for the husband and daughter.

We’ll be flying down to spend a week in OK with my in-laws for the holiday itself, and my husband just saw our doctor for prescriptions for the “drug cocktail” he needs to survive for a week in a house with four cats. So I think that makes us officially ready for Christmas.

Try to get my shopping done early, but keep thinking of things–bought another book tonight. Did get all the gifts I planned to make done over Thanksgiving. Bought some wrapping paper last night–needed particular colors and found them. Don’t have to send the grandchildren’s gifts this year, as they are now local. (Thank goodness–postage for last year was nearly $50!)

At the rate I’m going, it isn’t going to happen. Our house is torn apart at the moment and I can’t even get to the decorations. Even if I could, I couldn’t put them up. I shop all year for gifts, so that part is pretty much taken care of. We still haven’t figured out the christmas dinner plans yet. On Thanksgiving, we cooked here and brought everything to our daughters to eat, then brought everything back here for cleanup. We are both renovating our houses. I can’t get to my tables and she has no kitchen. It actually worked pretty well. We may so the same thing for Christmas. Luckily they live only 1/4 mile away.

Hope to get my tree up and get my Christmas cards out tomorrow. Most of my gifts will be books so I will be spending a bit of time online getting those ordered tomorrow as well.

I have bought Frodo’s annual Christmas outfit which he only wears to visit Nana at Christmas. Cute little black velvet suit with white silk collar and cuffs and a red bow tie. He looks quite dapper when he isn’t growling for me to take the outfit off!

Thanks for joining, Janet! It’ll be great to celebrate JAne Austen all together. But as I wrote in my announcement post the lovely graphics must be credited to Adriana Zardini at JASBRA. I’d love to be that good, but I’m not!
Let’s have a very good time next Thursday!

Procrastination can cost you a lot, I should know because I am a big procrastinator. I hate to shop in a crowd, so there is my dilemma

Happy birthday Jane!!!
Today is a great day for all her fans :-).