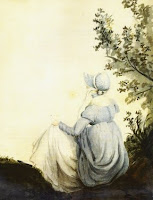 This Thursday will be Jane Austen’s birthday, the 235th anniversary of her birth. All week we are going to be honoring Jane and celebrating the fact that she lived and left for us wonderful works of fiction, novels that have been elevated the status of great literature.

In honor of Jane’s birthday, I’ll give away a blank greeting card, postcards and a Hatchard’s bookmark, all from one of my England trips. Just comment today and I’ll randomly make my pick and announce it tomorrow.

But when Jane was writing, she was not too different from us. She had stories in her head, like we do. She had to make that leap of courage to write them down, then to send them to publishers. She, too, suffered the pain of rejection and the exhilaration of actually selling a book. And, then, Jane had to fit writing in between other duties, just like we do. Sometimes, like when she lived in Bath, she had to put the needs of family members over her own.

Jane wrote romances. Oh, I know some folks would scoff at my saying that, as if I were insulting her, but her stories almost always have a central romance that finds its happy ending, just like our romances.

I like that Jane Austen wrote about marrying for love, a relatively new concept in her time. I also like that she understood that love transforms a person. Yes, Jane’s books were about so much more than a love story, but so are today’s best romances.

So…what have I learned from Jane Austen? 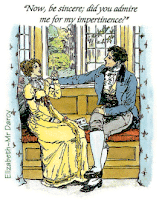 It is hard to say! When I read Austen or watch some of the movies made of her works, I just enjoy the stories. I get caught up in the characters, the setting, Austen’s fabulous wit, and I don’t analyze.

I know I love her characters and how deftly they they are drawn. Austen’s “brush strokes” on “little pieces of ivory” created characters who are so vivid and real that we can’t forget them, even 200 years later.

My three favorites among Austen’s books are the ones that are the most focused on the love story. In order they are:
1. Persuasion
2. Pride and Prejudice
3. Sense and Sensibility

Which of Jane Austen books are your favorites? Why? Do you get as “Lost in Austen” as I do? Make a comment for a chance to win my prizes!

I love Pride and Prejudice, Persuasion and Emma. I love Darcy and Lizzy’s flaws, which made them more real and human to me.

Good observation. Perhaps it is because Austen’s characters seem so human that they are so memorable. I would have listed Emma as my #4 and have to admit that Emma is a very unforgetable character!

I would say that Pride and Prejudice is my favorite story. I really enjoy all the relationships in the story and getting a glimpse of what life was like back then.

I love Austen and I am sure I am very predictable when I say Pride and Prejudice is my favorite of her books (but I truly love them all). My favorite thing about her writing is the fact that she makes me feel I know her characters. Also, I find her writing witty and charming. I laugh out loud at some of things her characters say and do. Her books will always be like old friends to me.

My favorite JA book is Persuasion. What I love most about JA is the craftsmanship of each book. How each sentence is so beautifully written. This woman wrote one of the most beautiful letters ever (Wentworth’s letter to Anne). “I am half agony, half hope.” “Tell me not that I am too late.” These are timeless and that’s one thing I do love about JA….she is timeless.

My three faves would be P&P, Northanger Abbey, and Persuasion. (I love me some Henry Tilney!) 🙂

One of the things I love about Austen is that I can read a character written two hundred years ago and say “yep, I know him.” And then I want to smack him. (Unless it’s Henry Tilney.)

I have so much respect and admiration for Jane Austen as a writer & storyteller and as a woman who took the chance to make a name for herself in a time where women were little more than homemakers!

My husband and I visited England last year and we stopped, albeit briefly, in Bath. I power walked to the Jane Austen museum and I could feel my heart hammering in my chest just at the thought that I was in the very same town that Jane lived in. I was completely awe struck!

I adore Pride & Prejudice! I find Lizzy’s pride and her need to defend herself & family very relatable. Sense & Sensibility is a close second and Emma in third.

There’s nothing more for me to add that hasn’t already been said or known about Jane. She was witty, clever, charming and absolutely timeless!

I love them all, with the occasional, urgh, at Mansfield Park. But even that book brought me Mrs. Norris. And since I used to have a Mrs. Norris in my life, it was a great comfort to know the type has been around for centuries. 🙂

I’ve enjoyed all of the Jane Austen books I’ve read, but Pride and Prejudice is my favorite.

This is a great post. I haven’t read as much Austen as I would like, but already, I can see the truth behind your words. I just love getting caught up in the story to the point where nothing else exists for me besides finding out what happens to the characters!

I have to say my favorite of her books is Pride and Prejudice. Almost every character in the story eventually reveals that they are somewhat more, and somewhat less than everyone thought of them. The talent it takes to create characters like that astounds me.

Sense and Sensibility is my next favorite because I LOVE it when the underdog(s) end up with far more than anyone ever thought they would.

Persuasion is next because I love a story of enduring love. Wentworth is actually one of my favorite romantic heroes!

Well, it is no surprise that Pride and Prejudice is in the lead.

Maureen, Jane George, and Kat, I agree with you that it is Jane’s character that distinguish and elevate Jane’s work.

Jane Austen, I agree! Some of the sentences are amazing.

Barbara E, you are in the majority!

JessiKay89, you understand just what I meant!

Louisa, I think Persuasion is the most like a modern Romance of all of Jane’s books.

Book Soulmates, Jane Austen indeed must have been very brave to attempt to do more than what was expected of a woman.

Rachel, That is an interesting article. I think the premise is all wrong. I don’t think Romance covers have anything to do with why they are popular in ebooks. I think it is simply that romance readers buy lots of books!

Rachel, That is an interesting article. I think the premise is all wrong. I don’t think Romance covers have anything to do with why they are popular in ebooks. I think it is simply that romance readers buy lots of books!

I love Jane Austen! My favorites are Pride and Prejudice and Persuasion. Something about them get me every time.
Margay