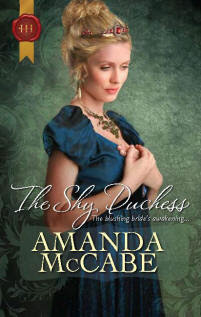 Happy Jane Austen Week, everyone! I’m so excited to see our annual tribute to everything Jane on the blog. But first things first–I have a new cover! The Shy Duchess will be out in March 2011, and is a spin-off from the Diamonds of Welbourne Manor anthology. (I think this looks exactly like Lady Emily–and I seriously want to steal her tiara…). The Harlequin Historical Advent Calendar contest Diane mentioned yesterday is still going strong (my day is the 16th–you can go to my website to see details! You can win a grand prize of a Kindle, or any number of daily prizes). And I’ll be at the Borders True Romance blog tomorrow!

And Christmas is flying at us! It’s busy around here, making Christmas candy, finishing the shopping, getting over a throat infection (yuck!). I’ve also been working at the part-time job, teaching a children’s ballet class, as I get them ready for their winter recital this weekend, a smaller version of The Nutcracker. It’s pink tulle, snowflakes, and craziness! And then I had to find something to write about for Jane Austen Birthday week (which is also my mom’s birthday week), and couldn’t think of anything. I’ve already talked about my favorite Austen novel (Persuasion) and my first Austen novel (Emma), and great Austen gifts (you can never go wrong with the Jane action figure!). But what to write about this year???

Since I’m buried in The Nutcracker, I started to wonder–what would it be like if Austen (or one of her contemporaries?) wrote the story? For one thing, there would be lots of opportunity for some great Regency-style costumes!

Let’s say Lady Whatsit is having her annual Christmas Ball at her grand estate of Whatsit Park, an invitation much sought after by every member of the ton. She has a claret punch, a roast goose, and fruit cakes, and copious decorations of holly and ivy with red bows. (No tree of course–they’re Regency, not Victorian! Maybe a giant stalk of ivy will have to grow out of the ballroom floor when the scene changes). There’s waltzing and flirting in the conservatory. Lady Whatsit’s two adorable children, Lady Clara and Lord Bratley, attend the party, and their godfather, the eccentric Lord Lotsamoney, gives them gifts. Clara’s is a nutcracker doll (were there such things in the Regency? I don’t know…), in the shape of–let’s say Wellington. Lord Bratley (who lives up to his name) snatches it from his sister and breaks it!

Lady Clara is heartbroken. She sneaks down after the party, bandages up poor Wellington, and falls asleep. But she’s not alone for long. Along come the French army of nefarious mice! Wellington battles them valiantly, and Clara helps out by tossing her shoe at Napoleon Mouse’s head. The French are run out of the drawing room!

In gratitude, Wellington takes Lady Clara to a grand campaign tent where the Sugar Plum Fairy (who is emphatically not Harriette Wilson) introduces her to all the grateful nations of Europe, who dance for her. Spain, Russia, China (don’t know how they got in there), etcetera. They shower her with sweets, tiaras, and gowns before she dances once more with Wellington and is then whisked back home again! 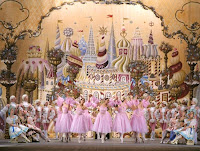 What is your favorite part of The Nutcracker? If they made an Austen novel into a ballet, which should it be? (I’d love to see a Pride & Prejudice ballet!) To one commenter on today’s post, I have a copy of Jane Austen: An Illustrated Anthology!

My favorite part of the nutcracker is The Waltz of the Flowers, but really every performance I’ve seen has something special. As for an Austen ballet, I am up for any version of Pride and Prejudice.

Oh, good question! I don’t know what’s my favorite part of The Nutcracker – I love the whole thing! But perhaps it’s when the Nutcracker comes to life.

I think Northanger Abbey would be a great ballet with its gothic theme – perfect!

I had the great good fortune to see Barishnikov dance the Nutcracker!!

I loved every part of it.

I think Persuasion would make a very dramatic ballet!

And I think that your little sugar plum fairies will be just darling!!! What fun.

I laughed out loud, Amanda, when you had to point out that the Sugar Plum Fairy was not Harriette Wilson!

Margay, I love love love the idea of a Northanger Abbey ballet! It would have lots of promenade and silliness in the first half, and lyrical Gothicity in the second. 😉

My favorite part of the Nutcracker would have to be the Dance of the Snowflakes. I don’t think it would be too hard to adapt for Jane Austen…just a little bit of traveling through the countryside with snow falling down around the carriage!

The Waltz of the Flowers is the nest part of the Nutcracker.

And Emma would make a FANTASTIC ballet–Emma and Harriet in a tutu!

I was a ballerina for 14 years and have danced numerous times in The Nutcracker. I have been everything from a flower to a snowflake to a mouse to Clara’s mother to my favorite role Mother Ginger (the huge fat lady who has all the little bon-bons come out from under her skirt). As Mother Ginger my hips were actually a large table on wheels and I had two people under my skirt pushing me around. I ate large than life food, put on larger than life make-up and had a blast. One year I was a Spanish dancer and had to spin off early to dress for Momma G…I couldn’t wear a bra under either of my costumes and the guy I had a huge crush on had to dress me while I did my hair. I had this corset with 20 eye hook closures. We never dated, but became good friends.

I am contemplating JA as a ballet. Years ago I saw The Great Gatsby as a ballet and it was amazing! I think of all the stories P & P would make the best ballet. I can see the obsequious Mr. Collins having some great dance scenes. I think someone needs to get on this.

“And I think that your little sugar plum fairies will be just darling!!!”

I hope so, Diane!! Since I don’t have much of a voice right now, and they are VERY excited, it’s been a little hard to keep control. 🙂 But they know their parts, and have the cutest peppermint-striped tutus as costumes

Really, I think any Austen novel would make a great ballet! NA could definitely have some fabulous Gothic dream sequences…

Ooo–I love the Nutcracker! My absolute favorite part is the exotic Arabian Coffee dance–first because I think it is beautiful and mysterious, and second because who doesn’t enjoy seeing a dark, muscled, and half-naked man lifting a dancer with ease? Yeah…definitely Arabian Coffee.

And as far as an Austen Ballet, what about Mansfield Park? I can just see Fanny Price cringing and dancing away from Henry Crawford’s slimy embrace…

I think my favorite part of The Nutcracker is the battle between the mice and soldiers. Happy Jane week!

That is a tough one. I think my two favorite parts of The Nutcracker are The Waltz of the Flowers because the music is just so joyous and glorious and the final pas a deux by the Sugar Plum Fairy and her Cavalier because it is SO romantic!

Hmm. Any of the JA novels has possibilities as a ballet. I have to agree that Northanger Abbey has great possibilities for atmospheric music and choreography.

Then again, Sense and Sensibility has some great opportunities in it for heartfelt pathos which I LOVE in ballets!

I know your little ballerinas are going to be precious, Ammanda!

“Then again, Sense and Sensibility has some great opportunities in it for heartfelt pathos which I LOVE in ballets!”

Plus lots of chances for romantic pas de deux! Now I want to find someone to choreograph some Austen ballets for us to watch. 🙂 (and I once had a dance teacher who proclaimed that the elevator to heaven probably plays the Waltz of the Flowers!)

I will report on the recital next week, and hopefully have a pic or two to share

An Austen Ballet? The Darcy-Lizzy pas de deux would be incredible!