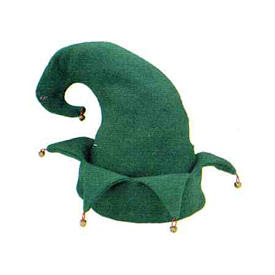 There is a Christmas elf in my life that is not a good elf.

First, it stole the tea I bought yesterday.

I had to go out to buy more tea and also realized that I’d have to buy the stuff we need for xmas dinner. So horrified was I to find the elf had bought all the loose green beans–we have no shortage of labor to top and tail–leaving only the expensive bagged ones, that the elf made me forget the tea. I then went to another store to buy the tea and when I came home the elf had cunningly replaced the original tea, but while I was rejoicing, stole the gift wrap, bought under great duress at the dollar store, that I knew I had brought into the house.

And so it goes. The elf is also in charge of programming on our local NPR classical affiliate–WETA, 90.9 FM, I’m talking to you–and playing hour after hour of appalling Christmas dreck, preciously overorchestrated carols. I only hope the announcers are under instructions to throw each CD on the floor after playing, grind their heels on them, rendering them useless, and thus making future Decembers safe for people who actually like music.

The elf is in charge of gas prices. The elf instructs people to wander round stores, talking on their cell phones, and lures cashiers away. The elf has hidden my favorite knitted winter hat. The elf has…

Well, I think you get the idea. Santa or whoever, please send over a bunch of nice, helpful elves who will find the things I’ve lost, clean the house, finish the book, and make me enjoy this alleged most wonderful time of the year.

Happy holidays everyone. Are your elves behaving?

The winners of the Austen birthday blog tour from December 16 will be announced officially here today, but Sofia, who I’ve just emailed, is my winner. Congrats!

Oh, lady. I once lost my husband’s $100 prescription shortly after I walked into the house. After hours of looking and a frantic call to the pharmacy for a replacement, where did I find it? In the kitchen trash.

At least I finally found it the same day. My car keys were not so lucky and ended up lost for about 7 weeks. Here’s a wish that you find all your missing stuff TODAY!

Ohhhh, so it’s the elf that lost a present package in the mail! And made my car not start this morning and my brand new Kindle not work. That bad elf!

I absolutely HATE to lose anything and have quite a gift for finding lost items. I didn’t realize I was battling bad elves.

Janet, at least your woes are entertaining!!!

Susan, losing that prescription must have really been a stress!

My elf made certain that one of the two books I intended to give my niece for Christmas was back ordered and won’t arrive until January 4th!

And worst of all that bad elf gave me a rotten cold for Christmas! I was off work today and rather than wrapping Christmas gifts and cleaning my house I’ve been in bed all morning in a Nyquil induced coma!

Ah, so that’s what happened! It wasn’t my poor planning and possible need for a new glasses prescription that sent me to the grocery store more times than I can count the last two weeks for missing or used up ingredients. (I’ve been twice today alone!)

No its that Christmas elf?

Is there such a thing as elf repellent?

I’m usually very good at finding stuff other people have lost but terrible at finding my own stuff. Nice to know it’s Not My Fault.

As for WETA, my husband has exactly the same complaint. H listen to a much higher proportion of CDs than the radio this time of year. There is beautiful holiday music, but it is rather wearing to hear the same few pieces over and over (and don’t go anywhere near 97.1 on the dial, which plays nothing but the dreckier sort of holiday music from Thanksgiving to Christmas).