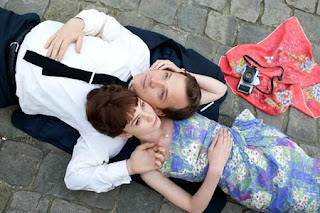 First off: I have not yet found time to write, but I have found time to open my work-in-progress and look at it to remind myself of my characters and where I last left them. Hopefully that writing time will come soon.

Second, commuting into and out of a job means I have time to read (as though I didn’t find time on my own anyway!). Reading on the subway is its own special pleasure, since there is, literally, nothing else you can possibly do besides be on the subway. No dishes, no laundry, no clamoring spouse/child/etc.–nothing but being on the subway going to your destination.

So while I wouldn’t hope for a subway slow-down, it’s not the worst thing ever if it happens. 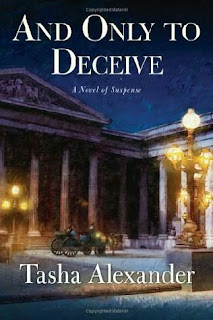 This week, I began reading the first book in Tasha Alexander‘s historical mystery series, And Only To Deceive (recommended to me by Cara Elliott), featuring Emily, Lady Ashton. Emily is an inquisitive woman, but has not been accorded an education in anything beyond needlework, languages and indifferent piano playing.

Within the first few pages, Emily is told the story of Paris and that damn golden apple and the three goddesses he has to choose to give it to. That startled me, since that story–and myths in general–were part of my upbringing, as integral to my knowledge base as the math tables and that there were fifty United States. 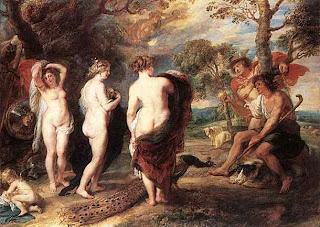 I pride myself on not taking anything for granted, but in terms of what I’ve been exposed to, I definitely have. What if I hadn’t been allowed access to books and knowledge? What if I were Lady Emily, bred to be a pretty ornament to a man’s home? No wonder our heroines are regarded as so unusual within their own society–they think and speak for themselves, chafe at their restrictions, and devour knowledge as greedily as Venus took that apple.

So while I have not found time to write (see how I brought that back around? I am all about the callback), I have found time to be grateful to be given the tools to enable me to write. And, eventually, I will utilize those tools.

Meanwhile, pity poor Paris, who had to make the hardest decision ever: Which vain, gorgeous goddess was the most gorgeous (and therefore would be the most vain)? Poor guy.

I have this same book sitting on the table beside my chair ready to read. It was recommended to me by Amazon after I recently devoured all the Lady Julia Grey novels by Deanna Raebourn.

I have suddenly become a multi-genre reader…romance and historical mystery. Who knew?

You are in for a treat. The Tasha Alexander series is fantastic! And the series Amy mentions is another great one.

I never really thought about the narrow education ladies in the Regency received.

I do find a parallel to today, however, with so much of education now emphasizing technology and things like literature, history and the arts being squeezed out many of our young people know even less about classical literature than your average Regency lady. It seems society is more interested in educating the past few generations to be technologically savvy worker drones than free thinkers with a knowledge of the history, mythology and artistic endeavors which to me, elevate man above the mundane.

I am intrigued by the “indifferent” piano playing. – just good enough to keep deaf old grannie snoozing, I suppose.
As for education, then or now, motivation plays a large part. Consider Elizabeth Bennett and her sister Lydia – same opportunities for both. But if I start on education, I’ll never stop, teachers never do!!

I have the Alexander books on my TBR pile too! Hopefully soon I will get to them, especially with your rec…

You are lucky to have the exposure you did when you were young. School was important, but mainly because you had to go. With a large family and both parents working, they certainly didn’t have time to read. They did read to us when we were little, but from then on, it was up to us to pursue it. I spent as much time as I could in the library, but science, nature, and ancient cultures were my preferences. I loved school and was the first of anyone of any generation on both sides of the family to go to college, and the first to get a degree. I wasn’t deprived. When I grew up, women became teachers, nurses, or secretaries. Times and opportunities have certainly changed over the past 40 years or so. It wasn’t that anyone was prevented from studying something else, for the most part it just hadn’t been done. Young women may read historicals and think how limited those Regency ladies’ educational options were, but their grandmothers had similar restrictions. Their mothers were very likely on the forefront of the change in educational opportunities for women. A lot changed in the 60’s.

I read the Tasha Alexander book. It was good, but I found myself more intrigued with the missing husband. What would have happened if …..? Well, I don’t want to post a spoiler.