I hope you’re all having a lovely Tuesday! I am about to jump back into writing an “Undone” short story I’ve been buried in all weekend (I sorta forgot it was due soon, but don’t tell!), and my head is full of Renaissance-era Scotland, but right now I get to take a break and hang out at the Riskies.

There’s new book out next month that looks like a lot of fun, Fall in Love Like a Romance Author–and I have an essay in it about dating as a single writer! (If I had to find one word to describe dating–interesting. I may have to post about dating tips for romance authors here soon…). Since I’m incurably nosy about other people’s life stories, I can’t wait to read the other essays. And it’s just in time for Valentine’s Day too!

And since the Golden Globes were this weekend, of course I have opinions! I posted about the red carpet fashion on my own blog–it was one of the most interesting rc’s in a while, and bodes well for the Oscars!

As part of my New Years resolutions, I’ve been going to more dance classes as well as teaching on Saturday, and it’s been very–challenging. Especially since, after several years off, I’ve decided to get the pointe shoes out again since I’ve been strengthening my feet and legs. My toes are not thanking me. But here is a brief look at the history of the pointe shoe:

In the Renaissance era, court masques were all the rage, where courtiers could put on elaborate costumes and act out allegorical stories amid fantastical scenery, and dancing was a huge part of that. When Catherine de Medici married into the French royal family, she brought this ballet de cour (“court ballet”) to Paris and, being French, they took to the spectacle right away. In the 1600s this art form reached a pinnacle under Louis XIV, who danced in them himself as a young man. He founded the Academie Royale de Danse (later the Paris Opera Ballet). At that time, the men did most of the elaborate dancing, while women, in heavy gowns and heeled shoes, were merely set dressing.

But by the 1730s, dancing of this sort was more theatrical than court, and a style known as “danse haute”, involving leaping and twirling, became the rage. Marie Camargo started a trend by taking the heels from her shoes and heavily darning the toes. Skirts got shorter and turns got faster. By 1830, Marie Taglioni took the dance world by storm. In that year, she danced the very Romantic ballet La Sylphide on the tops of her toes, and what had just been a sort of trick before became the norm of artistic expression. (In Russia, her fans even sometimes cooked her used shoes and ate them with sauce–ugh).

The 19th century was when the classical ballets were know so well today (Giselle, Swan Lake, La Bayadere) came into being, and so many of them feature a central heroine who is an ethereal being, a spirit not bound to the earth, and pointe shoes allowed the ballerina to create this illusion by seeming to hover and skim over the stage as if weightless, while the earthbound hero is enraptured. (But it usually ends badly, alas! Though I love the endings of Giselle and Swan Lake, where love can endure even death).

Taglioni’s shoes were soft satin slippers that fit her feet like a second skin, with a leather sole and heavy darning on the sides and underside. I can’t imagine going en pointe on such a shoe. By the end of the 19th century, the new Russian ballets (choreographed by Marius Petipa in the French tradition) demanded more technique, and the Italian school pushed athleticism over all. The Italians also had 2 secret weapons–the technique of spotting for turns and a better shoe. They also had shorter skirts. (When La Zucchi danced in St. Petersburg in a short skirt against the Imperial Ballet’s strict regulations, it caused a scandal!). The Russians adapted all of this, and even strengthened the shoes. Even today, Russian shoes are usually stiffer, better for the Russian technique of pouncing onto pointe rather than rolling through. (The Danish school, on the other hand, demanded a technique that required softer shoes for more bouncy jumps and elaborate footwork but fewer sustained balances and pirouettes en pointe). 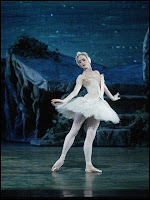 The shoes themselves haven’t developed a whole lot from the 19th century, though they are harder and boxier in the toe. They’re still made from leather, paper, burlap, glue and nails with a final layer of satin. They’re held together by 3 soles, or shanks, the outside and middle ones made of leather and the inside of cardboard. Then, with the edges of the satin and canvas between, they’re glues and nailed together. In order to wear them, they have to be broken in (there’s a brief glimpse of this brutal process in the movie Black Swan), and a professional dancer will go through several pairs a performance.

If you’d like to know more about any aspect of ballet, I highly recommend Jennifer Homan’s new history of the art, Apollo’s Angels. It’s a fascinating book.

So there you have it, a brief glimpse of the history of the ballet shoe! I feel like I need to go off and practice some plies now. What is your favorite ballet? And how are your New Years resolutions holding up now that it’s almost February? And what was your favorite gown at the Golden Globes???

My favorite ballet is Swan Lake and has been since the first time I saw it. I just love it. I recently saw The Red Shoes again, and there’s that great scene where she’s dancing the second act of Swan. Kudo’s to you Amanda for breaking out the toe shoes. My feet just hurt thinking about it, although have you noticed, after about 5 minutes, your feet go numb and you can’t feel anything anymore. I too am stepping up the dance classes but in ballroom.

I cannot get beyond the admiration — that after several years off, you’re back en pointe — to read the rest of your blog. Came here, gushed, went back to read the blog, came back here.

My favorite classical ballet is definitely Swan Lake like Elizabeth. I also like the ballet version of Carmina Burana and avant garde work based on African rhythms that our ballet company puts on once in a while.

Amanda! How admirable!
I always loved ballet and pined to take lessons as a girl. I did have a few lessons in my teens, but you really need to start early. I think it is magical to dance.

My sister and I used to have season tickets to the ballet at the Kennedy Center, but, alas! It became way too expensive. I did see some wonderful dancers – Barishnikov in The Nutcracker, Peter Martins and others.

I did not watch the Golden Globes. Must check your other blog!

“although have you noticed, after about 5 minutes, your feet go numb and you can’t feel anything anymore.”

This is so true, Elizabeth! At first it’s very hard to stay on balance and my toes are screaming, but then I can’t feel it any more and it becomes sort of automatic. Until I take the shoes off…

And I love “The Red Shoes”! A local museum has a theater for “artier” movies and showed it last month. It was wonderful to watch it on a big screen.

“Swan Lake” is one of my favorites, but I think my number one love is “Giselle.” (BTW, I’m hoping to go see Swan Lake after RWA in NYC this summer, if anyone else is staying over a few days and wants to go)

My daughter decorated her room in old pointe shoes, part pretty, part ew. She’s going back to SAB for summer. I get to go along to deposit her, yay! But I leave the day before RWA starts, so I won’t be able to drop in for drinksies, boo.

Good for you, Amanda! I admire your tenacity! I studied basic ballet, historical dance and modern dance in grad school as part of my opera performance degree. I really enjoyed it, but I would need more thrust than NASA uses for the shuttle to pirouette these days.

I am fond of The Nutcracker and Swan Lake, but my favorite ballet is The Firebird.

Jane, I am not at all sure I would want too many used pointe shoes in my room–I might be afraid they would come to life or something. 🙂 I do have one pair of shoes autographed by Darcy Kistler that I got for a gift once.

Are you sure you can’t stay just one teensy more day to say hi to us?? 🙂

Oh Amanda, you are making me nostalgic for my pointe shoes although my doctor said if I danced on pointe again I wouldn’t be able to walk by the time I’m 30. (I’m 31 and I already have arthritis in my feet from 14 years of dance). But I wouldn’t give up those years for anything.

As a side note I’m looking for not necessarily research material but a good book on the subject and am not sure if any of the Riskies can help. I’m very intrigued by Crown Prince Rudolph’s suicide and his eccentric mother Sissi. I have some DVDs, but I’m really looking for some good books on the subject (I’d like both nonfiction and historical fiction)….anyone know anything?

My favorite ballet is Swan Lake, but I’m also fond of The Nutcracker, Giselle and Coppelia.