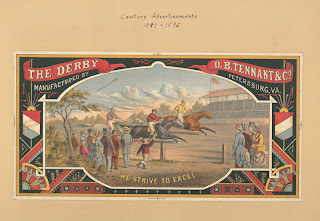 I’ve been researching horse racing for an Undone story, checking through Google Books, finding
Royal Ascot: its history & its associations by George James Cawthorne and Richard S. Herod. I had to chuckle when I read this:

No one did more to promote the interests of the Turf and to establish horse racing as a national pastime than Tregonwell Frampton, of Moreton, in Dorsetshire. “The Father of the Turf,” as he has been called, was born in 1642, and was keeper of the Royal Running Horses….Mr. Frampton was the cunningest jockey of his day, but his methods were not always above suspicion. In the celebrated match between North and South…Mr. Frampton attempted to deceive his rival by adding 7 lb. to the agreed weight

Who knew Megan’s “ancestor” was a jockey, a sometimes crooked one?

That got me thinking….If I searched Google Books what sort of “ancestors” would I find for the other Riskies?

I decided to search Full View only, between the years 1700 to 1900, but it quickly became apparent that “McCabe” was only going to yield authors named McCabe. I altered the plan to include only Google Books in “my library.” There were no McCabe ancestors in “my library” and no Mullanys either. 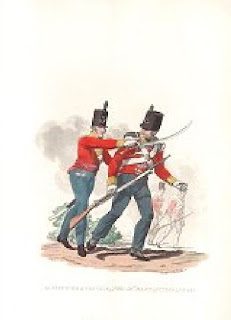 Here’s what I found for Greene in A History of the Peninsular War, Volume 5 By Charles Oman and John Alexander Hall:

Leave it to Elena to have a heroic “early relation.”

But what of Carolyn? I found Jewel immediately in Nimrod’s Hunting Tours 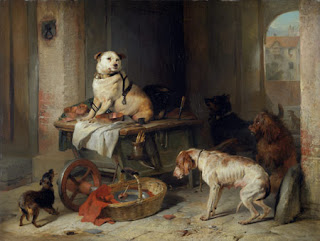 There are three bitches in Mr. Villebois’ kennel which must not be passed over—namely, Priestess, Madcap, and Jewel; …Jewel is by Foreman (sire of Lady)out of Jezebel. Jewel is the dam of Juryman and Jovial, two uncommonly fine hounds…Jewel has got a bone in the mouth of her stomach, which she cannot get rid of, and which prevents her hunting; but from her blood and shape she is invaluable in the stud.

Somehow I don’t think that Jewel could possibly be Carolyn’s “ancestor” (and OMIGOSH did you notice one of the dogs in the painting is relieving itself????).

Do you use Google Books? Do you have a favorite? I think mine is Waterloo Days by Charlotte Eaton.

Keep looking – there has to be a Gaston somewhere. No doubt in Napoleon’s camp . . . .

We actually don’t know much about the Jewel ancestors past about 1848 when it seems most of the relevant records burned. However, there is incomplete evidence that Bishop Jewell may be a relative.

I’m not sure when the second L dropped off our last name, but it appears to have been prior to 1848.

To my knowledge none of us are related to dogs though there are some unfortunate Jewels, including two convicted of murder. One of them, in fact, was an axe murderer. All the rest have been physicians, laywers or chemists. Apparently on my father’s side you’re either a psychopath or an overachiever.

My father, by the way, is a now-retired physician.

Kristine, you noticed that I didn’t search for Gaston!!

Carolyn! What a colorful real ancestry! Much better than I found. Somehow I think of an axe murderer and a physician to be polar opposites. There’s a psychiatric theorist (whose name I’ve forgotten but he is Jewish) who would say, “It’s the same d@mn thing.” (meaning any dynamic on the plus or minus side of a continuum, is essentially the same dynamic)

I would be honored, except I get Greene from my husband, whose grandparents Anglicized it from Greenberg. 🙂

There is some really cool stuff on Google books. While researching my balloonist, I found “An account of five aerial voyages in Scotland” by Vincent Lunardi, 1786. Very fun.

Ah! Using your method, Diane, my fake ancestress is an authoress: Frances Elizabeth King in 1812 published “Beneficial Effects of the Christian Temper.”

Now I can pretend to have literate ancestors! A very nice pretense. 😉

Sigh. I so wish we could get Carolyn housetrained…

I’m at historyhoydens.blogspot.com today talking about my uncle the spy.

Cara! Now I know where you get your Christian temper from!!

Janet, wow. How’s that for synchonicity. I’m going there now…

Very cute blog, Diane. Glad the Riskies have such a fine pedigree. But seeing how you all turned out, it’s not surprising that your ancestors were likewise illustrious.

If you do a Google book search for “Stevenson” and “George Washington” you will find the book “The Life of Washington” by Mason Locke Weems. It will mention the widow Stevenson pronounced then as “Stinson” and her seven Herculean sons who were friends with George while he roomed at the Widow Stevenson’s boarding house. We can trace our family back to the settlement at Jamestown, VA with our ancestor Captain James Stephenson and my mother’s family to when William Penn surveyed PA with two brothers, the Strawbridges. One brother got NW PA and the other got Philly area. (Strawbridges the department store is from my ancestors). We are also related to Joseph Seep who decided the price of oil during the reign of Standard Oil…he’s mentioned in Ida Tarbell’s book about Standard Oil and one of his grandsons was the astronaut Jack Swigert. Sorry, I love having a fun ancestry. JA

This is fun! And this looks promising. I looked up Abram James Bolton in Google Books and found this.

This came from the Transactions of the Lancashire and Cheshire Antiquarian Society Volume 5.

How cool is that??

Fun post. Unfortunately, I am not familiar enough with Google and don’t know about Google Books. Knowing what I do about some of my ancestors, I think I’ll not pursue any more information.

Rachel, I am so impressed at your real ancestors. I think you are very right to be proud of them. You come from good stock.

I think googling my last name – Dickens – would be a waste of time. Or rather an overwhelming about or response all with the same famous person.

Ha ha, Alleyne! Dickens might be predictably, you are right.

We’ll have to get together and talk racing….in the 19th century, that is.