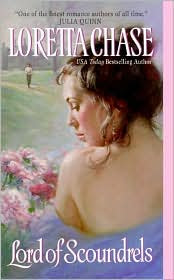 I recently edited the beginning of my mess-in-progress, pruning out some backstory that didn’t need to be in the first scene.

When I first joined RWA, the standard advice for newbies was to avoid the Dreaded Info Dump in the first chapter and just trickle in details from the characters’ past as needed. And I generally follow this advice, as I did this time.

But I never became No-Info-Dump Purist (or a Goal-Motivation-and-Conflict Purist, or a H/H-Must-Meet-On-First-Page Purist) or really bought into any of the hard and fast rules beloved by some critique groups. The reason is early in my RWA education I also read some amazing books that broke rules. Intelligently, of course. 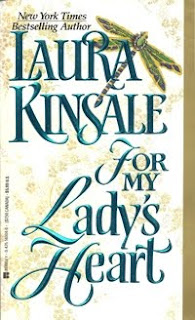 On one end of the backstory spectrum is Loretta Chase’s LORD OF SCOUNDRELS. It starts with a summary of the hero’s life from birth onwards. I have heard NID Purists protest—maybe they are just jealous. Readers in general and the judges of the 1995 RITA didn’t care. I think the beginning works because 1) it’s fast-paced and entertainingly written and 2) it really does help prepare the reader for Dain’s beastly behavior.

I found the opposite extreme in another favorite, Laura Kinsale’s FOR MY LADY’S HEART. The most heartwrenching details of the heroine’s backstory are held back until near the end of the book. Readers who love this book sense that there is something tragic that caused the heroine to develop such strong and sometimes sinister defenses. When it is revealed, it makes for a very powerful scene.

Anyway, how do you like your backstory served up? Any favorite rule-breaking stories?

Good writing is key here, in my opinion. If it’s well-presented, I say go for it — bearing in mind, however, that publishers generally shy away from such classical (or as they like to call it: medieval) antics. Charles Dickens and other great authors did this because, well, the style called for it at the time.

That said, I really, really don’t believe a brand new writer, trying to get that first book published can do this and get away with it UNLESS the writing is absolutely, positively, knock-an-agent’s-socks-off superb. And I know that’s a smidgen off subject, but I just want to throw that out there for a little diversity. Because a well-known author who has, say, twenty books on the shelf may info dump/back story log the beginning of her twenty-first novel, and we’ll all love her for it. Why? Because we trust her to give us a good story, regardless.

Personally, I like the scattered throughout kind of back story, because that’s what I strive for in my own writing. Which is sometimes hard to do when you wanna tell the reader all about your amazing, interesting characters, right?

Good question/subject. Hope I didn’t get too far off kilter. 🙂 ~

Great to see you here again, Elena! I love your Saturday posts. 🙂

I am not a big believer in “rules,” for much the same reason I don’t much care for most “how to write” books. Every writer has an individual style they have to develop. I’ve read plenty of books with so-called “info dumps” that work well. That said, some of the rules are probably there for a reason, to help new authors tighten and polish their prose and only break the rules when it’s for a certain effect or to a specific purpose.

The only rule-breaking that really does bother me (as a reader) is head-hopping. Pulls me right out of the book.

That scene in “For My Lady’s Heart” is the only scene in a romance novel that has actually made me cry. It was so deep and heart-wrenching, and taught me a great deal about the power of the “big reveal.”

I think ‘rules’ to adhere to or not to adhere to – that’s an individual thing. Provided the story runs well and captures the imagination, then anything goes, in my opinion.

I’ve read Loretta Chase’s book and absolutely loved it. It did have clunky bits but that was outweighed by the pace, the comedy and the chemistry between the protagonists.

I recently read a book that I loved called “The Lacemakers of Glenmara” and although there were two brief scenes where the heroine meets the hero, but you don’t know his name or anything and he seems a bit of a jerk. (I read on a kindle so I don’t know page numbers, but I know percentage of the book). The two actually properly meet 50% of the way through the book, which I found to be very interesting and not at all lacking. The book is beautifully written….words to describe it are lacking and it reminds me a JA in the way it is more of a character study than all sorts of adventure happening.

So I agree that sometimes breaking the rules is perfectly legit and actually works out pretty well.

Put me in the “non-believer in rules” camp, but I also agree with Alyssia that a brand new author would better try to write a great book without breaking too many rules, because agents and editors might feel more secure in taking a chance on such a book.

Of course, my mind goes blank if you ask me to remember anything specific!!! But I personally strive to reveal backstory in dribs and drabs, to keep the reader wanting to discover more and more about the characters.

The story and the characters are the key but can only be complete with a compelling story line.

I never take into consideration when the background of the characters are released because the correct order depends on the storyline itself. What works in once instance won’t necessarily work in another. Don’t worry because so far your batting 100% which is a whole lot better than any major league team did this year. If in doubt ask any of the men in my family! (Fortunately I love to read so I leave all the growning them.)

I have always chafed at “the rules.” Ask anyone unfortunate enough to critique my work. However, I too believe they are there for a reason for the new writer. Once you have learned your craft and learned the value of words – where to spend them and where not to – the I think you can begin to experiment and bend those rules, right before you break them.

I wonder, O Divine One, if anyone told you that you couldn’t right a courtesan as a heroine when you first started The Mysterious Miss M ? (One of my personal all-time top ten favorite Regency historicals of all time.)

As to back story, all I ask is that I not be bored by it. Don’t make me skim through it to get to “the good stuff.” I don’t mind learning about the hero’s past at the same time the heroine learns it and vice versa. There are other times I like being in the know so that when one character behaves badly because of a lack of information I can wince when they say something that makes me think “You are really going to regret saying that!”

There are times I LIKE a prologue. In Shana Abe’s dragon shapeshifter books for instance.

And while I’m not a rule stickler in general, the show-don’t-tell maxim is a reliable one. Knowing when and how to judiciously tell is a good skill.

From what I can glean from listening to agents and editors, they don’t read a submission looking for broken rules. IMHO the real rule is “Don’t be boring.”

It can be trickled in gradually, be dumped all at once, or be the BIG revelation in the later part of the book. It doesn’t matter so much which form it take as much as how well it is done. As your two examples show different ways can be very effective if handled well. In most stories, how the story is written and flows will determine how information is revealed.