(First I gotta give a big huzzah for Colin Firth winning the SAG Awards for best actor and for The King’s Speech winning best picture. So perfect!!! Just had to get that out of my system) 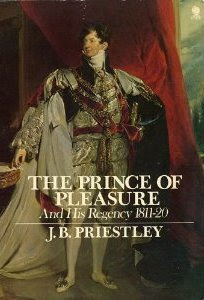 On February 6, 1811, the Prince of Wales signed papers making him Regent and unknowingly marking the official beginning of a period in history that, among so many other things, has spawned an entire genre of Romance novels, of which I am proud to include my books. We at Risky Regencies celebrate the time period every day, year in and year out, but to mark this very special 200 year anniversary, I’d thought I’d share my thoughts on why we are still enthralled with such a specific, and brief, time in history.

In honor of the Regency Bicentennial, I’m giving away a copy (albeit a used copy) of J.B. Priestley’s The Prince of Pleasure to one lucky commenter (although the cover might be different than pictured here). The winner will be chosen at random tomorrow so give me your comments before 1/31/11 12 noon ET

On my first blog with the Riskies I mused about why the Regency is such a popular genre in Romance. This blog is an adaptation of that one and, I thought, a good introduction to Regency Bicentennial Week.

First of all, the Regency was a beautiful time period. The lovely Classical architecture and decor of the Georgian age became more varied and colorful, but avoided the excesses of the Victorians. The Regency was a time of great wealth, of beautiful Country houses and gardens, of lovely, elegant fashions. Gone were powdered hair, white wigs, and heavy make-up of the Georgian age. Regency women wore beautifully draping empire-waist silks and muslins, dresses that would still be considered lovely today. Men’s clothing also became more like our modern clothing, the bright-colored brocades and laces of the 1700s giving way to the simplicity, cleanliness, and perfect tailoring Beau Brummell insisted upon. Men and women rode though Hyde Park in fine carriages drawn by perfectly matched horses. The titled elite gathered in exclusive places like Almack’s and White’s. Men sported at Gentleman Jackson’s Boxing Saloon or Tattersal’s. Ladies made “morning calls” in the afternoon, and made their curtsey to the Queen in opulent gowns.

Exciting people lived during the Regency. My favorite is the truly great but imperfect Duke of Wellington, the man who defeated the Emperor Napoleon, but there is also the Prince Regent (“Prinny”), Lord Byron, Beau Brummell, Jane Austen, Caroline Lamb, Harriette Wilson (who Amanda wrote about in her April 15 blog about courtesans), and so many more fascinating people.

The Regency time period echoes our World War II era in my mind, a time of great courage, honor, and drama, and one that eventually led into great social change. The drama of the long war with Napoleon, culminating in Waterloo, a battle still discussed, written about and fictionalized today. Also occurring at this time was the War of 1812, less victorious for the British, events in India, and the humming of impending social change, the beginning of the decline of the upper classes and the growth of wealth from industry and trade, social unrest nipping at the heels of the class system.

The Regency is a transitional period between the decadence of the 18th century and the repression of the Victorian Age. As such there are elements of both, providing rich opportunities for dramatic conflict. For example, it is an age when the idea of marrying for love came to the fore, and yet, marriages of convenience still took place. Women–married women, that is–were still allowed to enjoy a sexual relationship, although more discreetly than did their Georgian mothers. Their poor Victorian daughters were not so lucky. Roles and behavior were more fluid in the Regency, less defined than the eras before or after, allowing the novelist great license to explore.

The Regency is an accessible period: Distant enough to provide an escape from every day life into a world of beauty and conflict, but familiar enough to be able to imagine ourselves living in it.

I love going into the world of Regency England every time I sit down to write. It often becomes as real to me as if I truly lived there. I aspire to bring the Regency vividly alive in my books so readers might love it as much as I do.

It is great to be among this wonderful group of authors who feel that same love of the Regency and that same desire to explore it in new, exciting, and “risky” ways.

Now, for a chance to win The Prince of Pleasure, tell us what you love about the Regency….or comment about anything, like Colin Firth and The King’s Speech!

It’s odd how we feel we ‘know’ the Regency, just through reading novels – but I think we all feel sure we’d know exactly what to do if invited to dance the waltz at Almack’s with a gentleman we hadn’t been introduced to.

Beautiful write-up here. This is a period that I’m less familiar with (I’m usually all about the Tudors and this was pre-Showtime!). The Regency era was definitely sorta a magical time for the elite.

I love the Regency, having been mainly introduced to the era through Georgette Heyer novels – the fun of the macaronis, the fashions, the societal demands. And, I’m also very pleased about the King’s Speech win – what a great movie. Colin Firth was wonderful, so deserving of his award.

Linda and pageturner, I fell in love with the Regency through novels, too. And I do think I’d know what to do at Almack’s!

Amanda, one of the things I love about the Regency is that it wasn’t all magical for the elite. Things were changing. Their fortunes were dwindling and the industrialists were on the cusp of having the wealth. But as an author, you can write it either way!
And as a reader, you can find both kinds of stories.

Diane, you’ve said it so well I can’t think of anything to add off the top of my head.

The King’s Speech is now showing locally, perhaps because of the buzz. I hope to go see it Friday. 🙂

Elizabeth Mansfield was my first introduction to Regency Romance. She captured me, and I’ve been hooked ever since. I find it an interesting contrast. The waltz was considered scandalous, and yet the upper class viewed bed hopping as expected and essentially acceptable, as long as you were discreet, or not. And you’re right: It’s a turning point in history.

Diane, you know I’m right there with you in the Wellington fan club. Did I ever tell you I found a bunch of “Team Wellington” and “Team Napoleon” merchandise on CafePress? I carry my library books and farmers market produce in my Team Wellington tote bag now. (Although not books and produce at the same time, as the Seattle Public Library would frown on that.)

Aloha – lovely post! The Regency remains my first romance and my prefered romance. While most Regency books focus on England, some do venture to France, Spain, Vienna, and even India. But the Regency also brought the English (and Scottish) to Hawaii as explorers, traders, missionaries, and ultimately advisors. The Union Jack remains a part of the Hawaiian state flag in tribute to English (and Scottish) influence as the Kingdom of Hawaii emerged in the world economy.

Oh, goodness. You said it so perfectly I don’t think there’s anything to add other than I love to get lost in that period because of all the things you mentioned. It really is a fascinating time and so different from our history. Maybe because there is such a combination of times and so many possibilities!

I think I love the Regency period for the same reason I love the Edwardian period, because it was a transitional time as you pointed out. You have a war going on, but also a time where so many scientific discoveries are being made, and interesting women like the patronesses of Almack’s, and women like Lady Caroline Lamb, and Mary Shelley.

I fell in love with the romance of the Regency period through my mom’s historical romance novels. More than any other period, it keeps calling me back to a quieter way of life perched on the cusp of change. Lots of excitement in the air of times to come.

It’s the simple romance of the details that gets me. A cup of tea, a pelisse, writing a letter, cutting flowers to dry, a country dance…

You brought the Regency era to life for me in this article. I’m fascinated to find out even more about it.

I’ve read many historical romances that were set in this time period but none that inspired me to learn more than what I just read. I will take the knowledge you gave me and forever think of this time period in a different way.

I like the clothing with the beautiful gowns and jewels. I also love reading about women dressing up to go to the balls that were given then.

My new Undone story is due tomorrow, so I’m not responding to everyone today (you like-minded people, you!)

Just one question for Kaige…Who is your mother? I’m dying to know!

Viva la Regency!
(oops. I don’t think that was the right cheer)

What a fantastic post, Diane! I must admit, showing up at the page, creating new stories in the old Regency world, has proven such a rewarding, fascinating treat for me as a writer. As someone mentioned previously, the dresses, the dances, the morning/afternoon calls, and tea times (with cucumber sandwiches, of course!) make me wanna just press the back of my hand to my forehead and heave a dramatic sigh. Ah, heaven! When gentleman were really gentlemen, Wellington was a rock star, and the creme de la creme crammed into that small, stinky, humid pile of rooms on Wednesday nights and called it ‘vastly fashionable, omg!’

No other time period like it in my book — no pun intended. 🙂 Cheers!

Wonderful post, O Divine One! I love the Regency for all of the things you listed ! The entire time period is very much like the Duchess of Richmond’s ball – a grand age danced out over a series of years with glitter, polish, angst, intrigue and all with impeccable manners. All of it poised for the change brought by the Industrial Age, much as the Battle of Waterloo changed the lives of so many of the people at the ball that night. All of that glamor and civility and gentility under the candlelight waiting for an agonizing and hard fought battle to alter the world forever.

My husband and I are looking forward to seeing THE KING’S SPEECH. Colin Firth is such a versatile and good actor.
Behind the elegance of the Regency period, was the beginning of the industrial revolution and and the grinding poverty so many lied in. (I am falling asleep while writing this. I give up.)