My second historical was set in 1844, which is firmly Victorian. I picked that year because I really liked the clothes. But the book got a Regency cover: 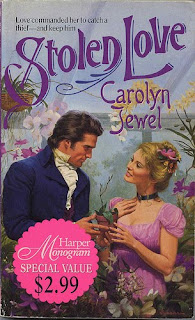 That’s the power of the Regency, folks, that a novel set in 1844 got a Regency cover. Yes, there were orchids in the story, so someone knew enough about the book to get that right. And now I confess that at that time I DID NOT WANT to write in the Regency. I didn’t like the dresses. Those Empire waistlines made everyone look pregnant and they reminded of the hideous maxi dresses that were briefly popular while I was in High School about a bazillion years ago. But as I was flogging my doorstop book and etcetera it was clear that Regency sold because readers loved the Regency. I finally abandoned the doorstop book and started another one which, eventually, became Lord Ruin, which was set in the Regency and for which I had to do LOTS of research because I’d been writing Georgian and Victorian. And the period kind of got to me. I began to understand the appeal. I had never read Georgette Heyer, you see, and I did not, myself, read Traditional Regencies and had the somewhat inaccurate notion that books set in the Regency did not have sex, and I wanted to write books where the door did not close.

So, I researched the Regency — pre Google days mind you — and learned there was a war on and all kinds of transition stuff going on as the Georgian Era ideal of class began to crack just the teensiest bit from the tension of behaving as if poor people wanted and probably deserved to be poor. People were getting different ideas about that— Reform???? Gasp! And the poetry rocked. The Regency won me over. I must say.

Getting around to the Chocolate

Over a my blog, I’m having a contest where the prize is 2 lbs of Leonidas chocolate. Go enter Also, at my blog, there’s a poll about what kind of fiction you read. Paranormal Romance is now leading Historical Romance . . . Just saying.

I love the Regency because there really was so much going on. Wonderful art, music, poetry, political upheaval, human rights, the industrial revolution you could go on and on…It really was an interesting time in history. Not be all altruistic add to that, men in tight breeches riding horses and I am truly addicted.

For why I love the Regency see Monday’s blog!

Carolyn, your story is one very unique path to writing Regency!

I got into the Regency because at an early age (3rd grade) I started picking up my mom’s traditional Regencies, including Georgette Heyer. I got in trouble in elementary school when a nun found one in my bookbag. Clearly, that didn’t stop me, though. 🙂

Two words equal the whole of my seduction: Pride & Prejudice. 🙂

Interesting that Carolyn wrote in the Victorian era rather than the Regency because she didn’t like the clothes. One reason I prefer the Regency is a preference for the classical lines in clothing, furniture, houses to the Victorian taste for excess, not to mention my dislike for muttonchop whiskers, aniline dyes, and flocked wallpaper.

Regarding Regency/Victorian clothes, there are a lot of Victorian-era clothes I don’t care for and I’ve grown to really like the Regency styles.

Woot for tight pants and boots!

I love historical fiction and Regency is a part of that. All eras have something to offer. The Regency was sort of the beginning a transition from the strictly structured society to something a bit more open. With the war on the continent and trade in India and other ports, opportunities were opening for many that had never been possible before. It was beginning to be possible to have some control over the course your future would take.