Happy Tuesday, everyone! I hope everyone had a good weekend (I went to a friend’s annual Superbowl Party, but I ended up just eating too much junk food and then watching Puppy Bowl with their kids. I do love Puppy Bowl!). I dug out from under last week’s storm, but they say snow is coming back tonight and I’m headed to Target and the wine shop to lay in supplies.

But being stuck in the house is not so very bad. It makes me stop procrastinating and get productive on the WIP and the website (which has updates finally! Including some Behind The Book history on The Shy Duchess!) I hit the halfway point on the Mary Queen of Scots WIP, and this is about the time the characters start to get out of control, going off on plot pathways I did not plan. It’s also about the time (in this story anyway) that things start to really heat up for the hero/heroine, and I realized I actually have a few rituals I do before writing a love scene. A few possibilities that usually work well:

These usually work wonders. They’re also good for getting in the mood for V Day. As probably every romance writer (and every poor husband/boyfriend who forgot to order flowers early and is now scrambling) knows, next Monday is Valentine’s Day! Flowers, candy, diamonds, and restaurants that are way too crowded and have overpriced prix fixe menus. If you’d rather stay home, order in and watch a movie, there are tons of sites out there with “top romantic” movies lists. Here are just a few sites I found if you’re looking for suggestions:

And here are a few movies I find to be romantic (or at least have romantic scenes!) and that I would be happy to watch anytime. (I just stuck with feature films here, not BBC-type costume dramas or we would be here until the Fourth of July…)

—Room With a View
—Moulin Rouge
—Persuasion/Pride and Prejudice (for the Austen crowd!)
—Shakespeare in Love
—Bringing Up Baby
—Breakfast at Tiffany’s/Roman Holiday
—It Happened One Night
—Last of the Mohicans
—Say Anything (one of my favorite movies as a teenager–I never did find a Lloyd Dobler though…)
—Eternal Sunshine of the Spotless Mind
–The tango scene in Mask of Zorro
–The Pere Lachais scene in Paris Je t’aime
—Bright Star
—Phantom of the Opera 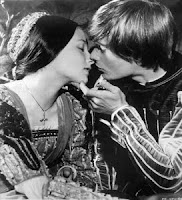 But usually I end up watching Romeo and Juliet (the Zeffirelli version) around this time of year! The costumes, the music, the balcony scene–sigh…

What are your favorite romantic movies? What are you planning for Valentine’s Day? And what are some of your favorite fantasy shopping places??? (Or any love scene-writing tips, if you’d like to share, LOL)

I really like two Meg Ryan films, French Kiss and Kate & Leopold. Love Actually is both my Christmas film and Valentine’s Day film. The Way We Were, GWTW, An Affair to Remember. Roman Holiday. There are so many. Oh, and Sense & Sensibility (Kate Winslet & Emma Thompson)

If you have “Bringing Up Baby”, you have to add “Philadelphia Story” and “His Girl Friday”. Romantic, smart, funny — just about everything I want in a romantic film (and it doesn’t hurt that Cary Grant is very easy on the eyes).

One of my favorite romantic movies is All About Eve, but I only need to watch it to the point when Margot reads the critique of Eve and Bill comes running up the stairs. He says “I came as soon as I read the piece of filth.” Then he takes Margot into his arms and says “Bill’s here, baby. Bill’s here.” Oh. It’s enough to melt my heart.

And my favorite JA has to be the 1970 version of Persuasion. If you haven’t seen it, you must! I love Bryan Marshall as Wentworth. He and Matthew McFayden could be brothers. But it’s four hours long so for a short one I’d pick “Pride and Prejudice” the Mormon version. It’s fun and sassy and I really love it.

As for writing love scenes, I’ve never done it. I’ve read enough to know what I like and what I don’t like. My one question about love scenes is: why do some writers feel that their heroine needs to say something to the effect of: he was so big he almost didn’t fit or some derivative of that? It just doesn’t turn me on. Personally I like to read a little bit of foreplay and then have the author trail off and leave the rest to my imagination.

I play a lot of Debussy, Ravel and the like when I’m writing love scenes.

As for Valentine’s Day, my husband and I don’t really go for the hype. But our kids like what I did one year, an all pink meal, so that has become a tradition. And buying Gertrude Hawk smidgens at half price the next day. 🙂

Elena, what do you make for an all-pink dinner?? That sounds like fun! 🙂

Susan, I love “Philadelphia Story” and “Hi Girl Friday”! My favorite Cary Grant movie is “The Awful Truth”. That would be another good one for Valentine’s Day…

Romantic movies? You know I’ll put Phantom of the Opera right on top!
But here are some others:
Casablanca
The African Queen
Meet John Doe

Susan/DC, I’ll also put in a good word for Bringing Up Baby and His Girl Friday.
And, Rachel, I agree with All About Eve.

And, Amanda, I agree about that version of Romeo and Juliet. What a great movie!!!

Love scenes? I just try to write them consistent with the characters…

You have all named most of my favorites!

An Affair to Remember

The King and I (Kerr/Brynner)

Phantom of the Opera

I’ll probably watch some of those Valentine’s night after working all day at the bakery decorating heart shaped cakes, cookies and cupcakes. I’ll be sick of red, white and pink sugary stuff by then!

The all pink dinner?

Louisa, I think now I must re-watch “North and South” immediately! 🙂

Favorite romantic movies – PRIDE AND PREJUDICE, LAST OF THE MOHICANS and for an oldie – AFICAN QUEEN. Not much in common there except great couples and chemistry.
I enjoyed the videos. the shock to me was how very few of those movies I have seen. I have heard of them all, seen clips, but not watched the movie itself. will have to fix that.
I don’t think we are doing anything special for Valentine’s Day this year. We are going to New Orleans for a week in March and that will be our celebration. We are looking forward to it.