Researching the Regency With Elaine Golden 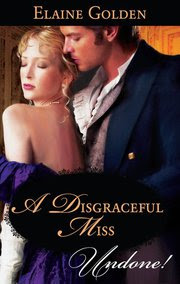 Note from Amanda: Thanks to my computer choosing last weekend to have a Complete and Utter Meltdown, I was not able to post Elaine Golden’s guest blog! She has graciously agreed to reschedule for today–and is offering a giveaway as well! Welcome to the Riskies, Elaine…

One of the things I love most about writing historical romance is the research. Oh, I don’t particulraly care about poking around in dusty tomes, but I do love to learn little tidbits about how things were, how people thought and lived differently than they do today. I’ve been known to get lost randomly flipping around in an encyclopedia, or the modern day equivalent by following curious links in Wikipedia. I even keep a Historical Trivia page on my blog filled with odd historical facts (as well as blurbs and excerpts!).

The old author’s adage suggests to “write what you know.” Research is an essential tool to understand the dynamics of the era, and to present a story that will immerse readers in the culture and trappings of an historical romance.

The Internet is such a vast resource for historical research. There are wonderful bloggers who share their knowledge of the era, digitized maps and images and period publications, and there are endless photographs from tourists and travelers. So very many resources available at our fingertips!

And such interesting things I have discovered as I research the Regency era for my Fortney Follies series published by Harlequin Historical Undone!
–The British Regency nearly began 22 years before the Regency Act was passed on February 5, 1811. The reigning George III suffered several bouts of mental illness during his reign and in 1789 Parliament almost passed the Regency Act after a great deal of debate. Only a swift recovery from the King at that time stopped things. I blogged about it earlier this month on the Harlequin Blog.

–When researching the origin of the Regency phrase “in the pink” I discovered the phrase’s origins–and a whole lot more. Dod you know the color pink was considered a “masculine” cover until the 1940s? I blogged about all things to do with pink on my site…

–The Prince Regent loved Brighton and taking the waters there. And he had a favorite bather, a local character named Martha Gunn. I’ve also blogged about bathing in Brighton, Prinny, and Marth on my site! 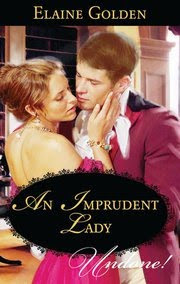 Earlier this month Diane Gaston posted some great links on Regency research. In addition to those wonderful sites, some of my own favorite Internet links include:
—The Online Etymology Dictionary: Not a traditional dictionary, but an explanation of the origin of words and what they meant at various points in time. Ever wonder if a word is historically accurate? What it meant to the Regency hero or heroine? You’d be amazed at how the meaning of a word can change so radically over the centuries!

Comment on this blog post for a chance to win an electronic copy of my debut Regency romance, An Imprudent Lady! I’ll select two winners at random at 6 pm Pacific time on Wednesday, February 23…

And do check out other Undones! These short sexy romances are perfect when you have limited time but want a great romance to read. Michelle Styles generously shares this month with me, offering a sexy Roman-era romance with The Perfect Concubine

“Historical Map overlays with Google Maps” – I’d love a link to this but I can’t find one!

I love to read a well-researched historical novel and have learned various tidbits from them that you don’t find in traditional history books, but I hate it when authors take it too far and write dissertations on something that has little or nothing to do with the story.

The Online Etymological Dictionary is an essential tool and I also have used the historical maps.

pageturner, the historical maps are on Google Earth. You have to download Google Earth, then they are under Rumsey’s Maps (I think).

I did actually know about the color pink being masculine until the 1940s. There was this one professor I had in college who tried to argue the Jay Gatsby from The Great Gatsby was gay because he wore a pink suit. I parried with the fact that pink was not considered a feminine color and also said that you couldn’t place 21st century ideas on a 20th century novel. I think I got one of my three C in my academic career in that class.

I think that’s one thing that I really hate about some “historical” novels….people not doing their research and people trying to impress 21st century ideas on another century. It just doesn’t work.

“Pink” may not have been the same color we call pink, but the faded scarlet of some hunting jackets.

I’m not a Regency writer (just a Regency reader), but I’ve always love Fashion-era.com’s sections on Regency fashion! http://www.fashion-era.com/regency_fashion.htm – they’ve got a lot of other great historical fashion sections as well.

Wow. I am loving learning all of these interesting facts. Sadly I can’t think of any to add.

Oh, gosh! Somehow we dropped the link to the Historical maps. My apologies! Here’s the link!

I think I understand what you mean. It’s a fine line between rich historical detail that enhances a story and exhaustive details on mundane things. I love it when an author strikes the right balance –that’s what keeps me reading (and writing!) historical romance!

Thanks! It’s great to be here!

So sorry for the broken link on the maps. I’ve posted it above.

Good for you, putting in a strong argument with that professor! And bad form if he dinged you on your grade for it!

It is a bit tricky sometimes balancing historical details with modern sensibilities. I’ve bumped into an instance in each of the Fortney Follies stories. I go for accuracy or leave it out altogether. To the best of my abilities, of course! 😉

Thanks so much for another great Regency research link!

Thanks for stopping by!

I don’t have any curious details to share and don’t enter me for the giveaway as I’ve already read the story. Waiting for the next one! 🙂 Good thing they are coming out close together!

Awe, thanks @growlycub! Glad you enjoyed it enough to read the next one!

Welcome Elaine! So glad Amanda could get your post up.

Thanks to everyone for replying and sharing research tips.

According to random.org out winners are

@Bibliophile, an email with instructions on how to download the book is on the way!

@Rachel, can you email me at elainegolden (dot) author (at) gmail (dot) com so I can send your instructions?

I hope you both enjoy AN IMPRUDENT LADY!