Maybe I’m still living under a rock, so apologies if this has been discussed here before. I just found out about this new version of JANE EYRE, starring Michael Fassbender and Mia Wasikowska and due out in theatres on March 11.

But I won’t get my hopes up too much. I’ve had a rough relationship with JANE EYRE on film. I have liked all the actresses who’ve played Jane but too often the casting of Mr. Rochester or some other factor don’t quite work for me. 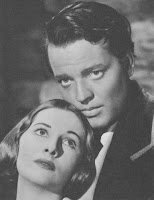 The 1943 version (Orson Welles, Joan Fontaine) version captured some of the feeling of the book but tampered too much with the plot and dialogue for my taste. 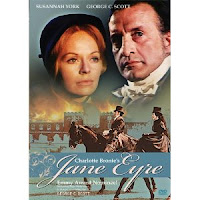 I have not seen the 1970 (George C. Scott, Susannah York) version. How did that happen? Should I look for a copy?

The 1983 (Timothy Dalton, Zelah Clarke) miniseries was pretty good, I thought, but he came off a bit too handsome for Rochester. I find this cover amusing, relegating the title character to the background!

As for the 1996 (William Hurt, Charlotte Gainsbourg) version, all I can say is I like Hurt much better in other roles. 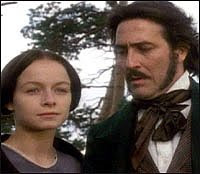 I had high hopes for the 1997 movie with Ciaran Hinds and Samantha Morton, but I was disappointed. I like both the actors but the film felt rushed to fit a target length.

Finally, I loved the 2006 miniseries with Toby Stephens and Ruth Wilson. It is easily my favorite adaptation.

Hopefully this new version will be at least as good. Check out the trailer. What do you think? Which versions will it have to contend for to be your Favorite Jane Eyre Adaptation?

I agree about the 2006 miniseries with Toby Stephens and Ruth Wilson. Neither actor was particularly beautiful, and that, to me, captures the spirit of this story MUCH better than previous attempts at bringing Brontë’s work to the big screen. Stephens’ sinister interpretation of Edward Rochester was entirely believable, a perfect catalyst to Ruth’s humble, slightly less-than-perfect Jane.

I, too, am looking forward to the new film, and have decided to watch with an open mind. Let’s just hope we’ve got some good Hollywood writers on hand this time.

I must admit that the Joan Bennett/Orson Welles version made a huge impression on me when it appeared on TV when I was a child, but it was the part where the young Elizabeth Taylor appeared. I remembered that part for years when I’d forgotten the rest of the movie.

Alyssia, I like that miniseries for the same reasons. Although I’ve seen Toby Stephens look quite handsome, as the Duke of Orsino in Twelfth Night–another adaptation I like very much. He seems very versatile.

Diane, I remember that movie but not that scene, LOL.

I’m with you, Elena. the 2006 version was amazing and although I love Michael Fassbender, I think he has his work cut out for him to compete with Toby Stephens’ Rochester. But I will watch it just the same!

Wow, that trailer is promising!

Even though Timothy Dalton is too handsome to play Rochester, I really enjoyed that version. I do think the 2006 miniseries is the best version so far. I really am looking forward to the new movie.

Intriguing trailer. I don’t think I have seen any of the films listed. I have seen a few stage adaptations.
I will have to reread the book and sample these movies, then see the new one.

I wonder what Charlotte Bronte would think of all these remakes of her story?

My favorite is the mini-series with Ruth Wilson and Toby Stephens, too.

Maybe once we’ve all had a chance to see it, we can talk about this new one. 🙂

I’ve seen every version. Sadly, what sticks out most in my mind about the 1970 version was seeing the microphone dip into the screen a couple of times. I can’t wait to see the new version.